“Maybe all we can hope to do is end up with the right regrets.”
—Arthur Miller

I started this blog in 2004 while navigating the rubble of a divorce, single parenting, unemployment, and a whole boatload of squelched hopes and expectations about my life and who I want to be when I grow up. A lot of things have changed since then; most of them for the better. (I don’t have as many “how exactly did I get here?” sorts of moments as I used to, for example, but they do still creep up on me now and again.) I’m living a life I never planned for but now cannot imagine being any other way. And yes—after all these years—I’m still writing my way through it, laughing at myself as much as possible, trying to make sure that I end up with only the right regrets.

In 2007 I remarried, to the handsome and wonderful—albeit geeky and pseudonymous—Otto. Darling Otto is now featured heavily here on the blog (with his own category and everything), because I can think of nothing that is a greater testament to either the power of love or the totality of earnest repression than daring to remarry after a messy divorce. Fortunately, Otto and I have known each other since our sophomore year of college, so he already knew I’m neurotic and I already knew he likes bad jokes. We’re hopeful. Besides, we’ve already made it over a baker’s dozen of years (go Otto! you’re my longest-running husband!), he always does the dishes, and the kids seem to like him. I plan to keep him around.

The writing thing seems to have worked out for me; after having worked as a nanny, software engineer, technical writer, mortgage broker, and marketing drone, I’ve finally found the job I don’t hate! I’m a freelance writer full-time, now, so you should feel free to hire me and give me lots of money at your earliest convenience. Also, I love your shoes and your hair is looking particularly shiny today.

Now you know it all. I’m not really all that complicated. Shut up.

About My Kids Semi-Adults Spawn

What can I say about my offspring? They are the most fantastic, fascinating, hilarious, aggravating people I know. When I started writing here, they were 4 and 6. Now I’m supposed to believe they’re grown-ups, which is just pure crazypants malarkey. If you read my archives, you’ll come to know and adore them and also wonder when they stopped being children. But here’s a snapshot of the wonderful weirdos they’ve become. 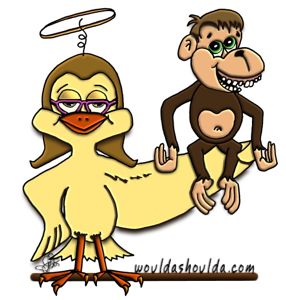 Chickadee is 24 (!!!) years old. She loves all things band (marching/pep/etc.), ukulele, gel pens, combat boots, Tumblr, TikTok, tasteless jokes, rainbows, Netflix, relentless ‘gramming, bossing others around, and being away at Tinytown College (not its real name) where she stays up all night, eats nothing but candy, and maybe sometimes goes to class she has now graduated from Tinytown College and is—as the kids say—hotter by one degree. Her favorite hobbies are telling you why you are the way that you are because of your Enneagram and explaining why you are wrong (and selfies, preferably with jazz hands). She can make me laugh so hard it hurts. I am not allowed to follow her finsta, but she shows me the posts there, sometimes, anyway. The bottom line for her is a lot like the old poem about the little girl who had a little curl… when she’s good, she’s very, very good. When she’s bad? Take cover. A heartfelt hug from her is a soothing balm for whatever ails you, though that happens a lot less than I would like because she now lives 1,000 miles away from us with her amazing girlfriend, Sunny, and their cats. Supposedly she is “going to grad school” and they’re both “working,” or something. They subsist on love and Whataburger, mostly.

Monkey is 22 (!!!!) years old. They are the quintessential younger sibling: enduring their sister’s ministrations with patience and goodwill 99% of the time. (Beware the remaining 1%.) Their loves are RPGs in all their many forms, Pokemon hunting, math, programming, being right, inventing things, terrible puns, Homestuck and Order of the Stick (neither of which I understand), and referring to their beard as their “mighty man hairs.” Monkey is a lot like a Great Dane puppy; lots of love, lots of tripping, and a certain bewildered oblivion about both of these things. Since graduating from high school, Monkey did a multiyear decent life impersonation of Goldilocks, minus the “finding the one that’s just right” part. As such we tasked them with finding their joy rather than doing what they suspect they “should,” and this was scary for all of us. But it was good, too. They are, finally, back in college full-time (and it does seem right this time). They are finding their way and their joy (part of which included letting us know we had their pronouns wrong; they are turning out to be a late but confident bloomer and it’s wonderful to behold). Monkey’s dimples may well be responsible for the melting of the polar ice caps, and their kindness is unmatched. 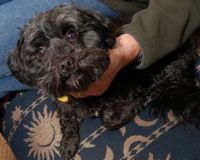 Licorice wasn’t actually human, but we didn’t tell her that. She was a Shih Tzu/poodle mix we adopted from a local rescue group in September of 2009. She was spoiled rotten and my loyal sidekick for over a dozen years, and the rest of the family was similarly smitten so I was excused for talking to her in the world’s most obnoxious who’s-my-widdle-baby voice. Licorice enjoyed long naps, performing emergency squeakerectomies on her toys, fruit of all kinds, popcorn, sneezing on command, chasing the “giant chickens” down by the pond, and writing bad poetry. She died after a brief illness on Thanksgiving day, 2021. It’s hard to believe that a 13-pound creature could leave such a large hole behind, but that’s the kind of dog she was. 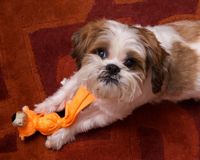 Duncan Donut joined the family in November of 2013 and appeared to be undead for many years, but finally departed on July 14, 2021. A Shih Tzu/Lhasa Apso mix with a mournful howl who turned out to have a host of health problems and—surprise!—was almost completely blind, there were a hundred reasons why adopting Duncan was a terrible idea. There’s just one reason why it was perfect: We loved him. And he seemed to fit in with our motley crew just fine. Duncan enjoyed throwing a ball for himself, drinking too much water too fast and yakking it back up, snoring loudly, trying to communicate with us in Wookiee, and barking at Licorice until she chased him. [Side note: In October of 2019, Duncan was diagnosed with “severe and life-ending pulmonary hypertension,” and we were told he would likely die within months, if not weeks. He lived almost another two years. It wasn’t long enough.] 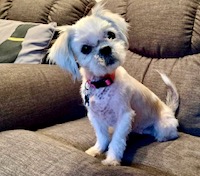 Goosefeathers McGee arrived in early November of 2021, our first foray into fostering for the organization that Licorice came from so many years ago. She was a tiny white mop of alternating anger and submission, and I was positive we’d have her for a couple of weeks and then she would be leaving for her forever home. But. Licorice died a few weeks after Goose’s arrival, her medical clearance kept getting delayed, and we all fell in love with her as she turned into a goofy little lovebug. Oops!  (Yes, I foster failed on our first foster. I am duly ashamed.) Licorice loved her and Licorice didn’t even like Duncan; we chose to take it as a sign. Goose’s age is unclear and we assume her to be a Shih Tzu/gremlin mix. Please do not feed her after midnight.