Not undead after all

I don’t know how to ease into this so I won’t. Duncan is no longer undead, he’s just regular dead, now. And it feels shitty and morbid to put it like that, but I don’t think he would mind. If Duncan could’ve spoken English I like to believe he would’ve cussed like a sailor and been very blunt. “Listen, I’m 207 fucking years old now. I can’t hear. I can barely see. My brain’s going and I piss everywhere and when you let me go, don’t pussyfoot around it and say I ‘passed on’ or ‘went forever to sleep’ or anything. Just say I’m dead. But also remind everyone that I was a legend because I cheated death for years.”

I can’t know for sure, of course. But that’s what I think he would’ve said. And then (as long as I’m predicting what my dog would’ve had to say about his own mortality) he probably would’ve reminded me that he was dying and and really, really liked cheese, so why wasn’t I inserting some cheddar into his mouth right then?

It was just a few weeks ago that I was updating here and assuring you all that even post major-seizure or stroke or whatever that horrible event was, Duncan continued to be utterly undead and unbothered. Sure, in the days and weeks that followed we watched him like a hawk, but other than being a little unsteady and a whole lot leaky, he seemed fine. I mean, as fine as he ever was.

The one thing I started noticing more and more around that time was that Licorice—who never wanted a brother, thankyouverymuch, and who generally completely ignored him—was smelling him a lot. Like, he’d be sleeping and she’d go stand over him and sniff him all over. Or they’d both be standing at my feet, begging for food, and she would get distracted and start sniffing at his mouth and ears.

I think in the back of my mind I knew what that meant. But I convinced myself I was just being paranoid. Or I was in denial. I dunno.

Anyway. A couple of days ago I was home alone with the dogs, and Duncan was snoozing on the bed, and he woke up and seemed a little agitated. He normally sleeps most of the day, but sometimes he wakes up and repositions himself, so I patted him while he stumbled around in a circle, figuring he’d be back asleep in a few moments. But then he had another seizure that was almost identical to the huge one he’d had a few weeks before, which meant that I had a few seconds to process his stiff limbs and back arch and realize he was going to make that awful sound again. So I knew it was going to happen and theoretically I was prepared but… yeah, I was not prepared. He yowled and I cried and tried to comfort him and after a minute or two it stopped and he was just… so confused. I had to move him off the bed because he had peed, and I tried to get him comfortable on the floor and then strip the bed and message Otto and check on Duncan and start the washer and message Otto again.

I called our vet and they were booked up (but said we should definitely take him to Emergency), so Otto came home and we took him to the big vet hospital. By this time, Duncan had perked up considerably, and I was wondering if they would think we were making the whole thing up. Ever the gentleman, Duncan decided to punctuate our story at the front desk by lying placidly in Otto’s arms and then peeing in a beautiful arc all over the floor. So much pee. Y’all. He had just peed all through everything on the bed. WHERE DOES ALL THE PEE COME FROM??

They took him back and I texted with Chickadee and tried to reach Monkey, who is of course (OF COURSE) off on a long trip with his dad far away in a place with very little cell signal. We filled out paperwork, and a med student came and talked to us about his history, and eventually we got taken back to talk to the vet in charge of his case.

Long story a little bit shorter, they wouldn’t be able to definitively identify the exact cause without a lot of expensive and invasive tests, and his blood sugar was dangerously low and his oxygenation was poor so they’d put him in an oxygen box for the time being, but everything they suspected as possibilities was not really going to be treatable, anyway, because “he clearly is suffering from permanent brain changes at this point.” I asked if she thought it was a brain tumor and she said that seemed likely, but also his chronic low blood sugar could actually be damaging his brain (there’s a name for it that I can’t remember), and either way, it’s possible that steroids would help… but steroids are hard on the heart, and he has a pretty significant murmur, so steroids might create “other problems.”

She ran us through all possible scenarios, concluding that he would certainly continue to have major seizure events more often and—as we’d suspected—they likely were very painful for him.

So we talked, and they brought him into the little room where we were to spend some time with him. They left and he lurched around unsteadily and resisted our efforts to snuggle him. I’m not sure he even recognized us. Eventually they came back and we signed some more paperwork. The student wrapped him up in a towel and we held him and stroked his head and told him it was okay, and the vet did the merciful thing while my nose ran all over my face and my poor undead dog who was now just plain dead.

We drove home to a frantic Licorice who ran around in circles, looking for Duncan, and then lay down at our feet as we toasted Duncan’s memory and drank in silence.

Chickadee seems okay. She actually talked me off the ledge some when I couldn’t get through to Otto right away. Monkey was very angry with us at first, which is fine, but now he’s just sad, which is worse. When he left on his trip, Duncan was sleeping so he didn’t get to “say goodbye,” and I (I don’t remember this, but I’m sure it’s true) assured Monkey it was no big deal because Duncan would be fine while he was gone. Sigh.

And here’s the thing: I know we did right by Duncan. He had a hard life before he came to us, and we gave him everything I think every dog should have even if they’re jerks; and make no mistake, DUNCAN WAS AN ENORMOUS JERK. He was not a good dog. He was objectively a pretty terrible dog. He was a fear biter and he didn’t like to snuggle and his breath was awful. He never barked at potential intruders but acted like he was being stabbed any time I groomed him. He cost us thousands of dollars in medical care and most of the time I wasn’t even sure he liked us. Thanks to his hypoglycemia we could only ever leave him for a few hours at a time, and this last year we basically haven’t left him at all (save for the one brief time we chanced it and he freaked out in the crate and ended up covered in poop). He refused to go for walks even when he was relatively healthy. He didn’t play fetch. He annoyed Licorice for years on end, actually getting up the very morning that this all happened and wandering over to FLOP DOWN RIGHT ON TOP OF HER and resume snoring. And I can’t even remember how long he’s been peeing in the house but it started before Chickadee moved, so AT LEAST A YEAR, and we have mopped up a lot of pee without complaint. (That’s a lie. I always complain. I would get right in Duncan’s face and tell him he was a terrible dog and that I was going to make him into stew, and Otto would say “HEY!” and I would remind him that Duncan was deaf and then I would whisper “But still, STEW” and Duncan would lick my chin.)

We bought him all kinds of toys, hoping to find the one he would like. We dressed him in Halloween costumes (which he hated) and sweaters (which he loved, once they were on) to keep him warm in the winter. When I was in the kitchen cooking and the dogs would stand there, wagging and hopeful, they always got a taste or two along the way. He crunched countless ice cubes over the years and delighted in being handed a giant stem of romaine or a handful of spinach as we all shouted in unison, “LEAF!” (Duncan loved leaf. No, I don’t know why we call it leaf, but it is leaf, not leaves, regardless of the number.) He positively lost his goddamn mind over popcorn and Otto would give him so many pieces for the joy of watching his enthusiastic crunching that I would always end up saying, “Stop, he’s gonna get sick!” Otto took thousands of pictures of him over the years. Duncan would lean into me and do little contented-grunts while I cleaned his ears. And I think he even learned to enjoy the ubiquitous “I AM GOING TO RUB YOUR TUMMY AGAINST YOUR WILL” bedtime routine, because somewhere in there he knew how much we loved him, and I think he loved us a little, too.

The house is too quiet (his snore was positively majestic) and Licorice is very clingy. It’s hard to believe he’s really gone.

We elected to have him cremated, which is outsourced by the hospital to a local funeral home. Yesterday a very kind woman with a soothing voice called me to “make all the arrangements.” I tried to handle the call like an adult, even though my discomfort kept making me want to burst out into hysterical laughter, because I don’t know how to grieve like a normal human.

To wit, here’s the text exchange I had with Otto after that phone call: 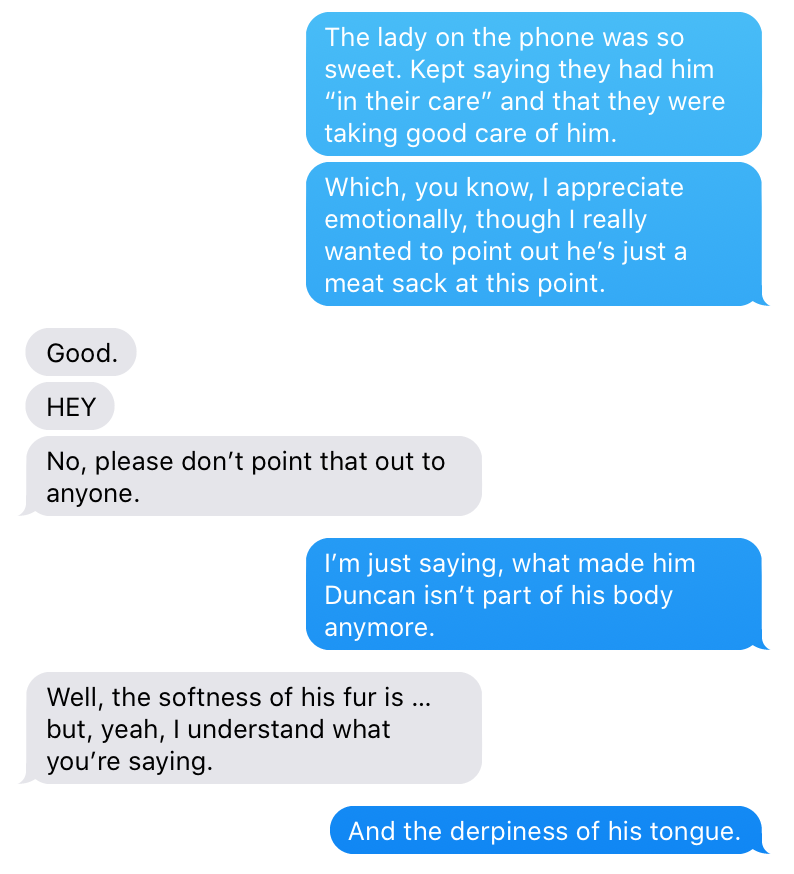 Of course, I’m over here calling him a meat sack, and Otto wrote this lovely little tribute to him that included the perfect line, “He had the softest fur… and strongest jaw… of any dog I ever got to pet.” Which, you know. That pretty much sums it up.

We sure did love that little jerk. I imagine that wherever he is now, his body and mind are healed and whole, and he is surrounded by a veritable buffet of cheese and popcorn and ice cubes and leaf. And also sticks.

Sticks were these little rawhide sticks I got the dogs at some point. Licorice could demolish one in about five seconds but Duncan was too stupid (honestly) to figure out how to hold it in his paws in a way that he could chew on it, so Otto used to just hold it for him while he jawed away, happy as a clam.

I shall leave you with proof of Otto’s patience and Duncan’s love of sticks. This video makes me laugh and cry at the same time. He’s so earnest. Lord. I miss him so much.