I’ll tell you the truth: This past week I really began to despair of us ever finding the right dog. I mean, I knew it would happen, intellectually, but emotionally I was feeling like an unfit mother. (Thank goodness I’m not melodramatic or anything, right?) If only things had gone better with Super! If only the right dog hadn’t already been promised to someone else! If only I was just a better person!

Have I mentioned about how I’m a joy to live with…?

I kept telling the kids that when we found the right dog, we would all know it. So when a little 3-year-old shih tzu mix popped up on the page of a local rescue, there was a little tug on my heartstrings, a little quickening of my pulse, and then an immediate feeling of doom and gloom. “We’ll want her but someone else will get her,” I thought. “Or we’ll want her and they won’t pick us.” I filled out the application, but I tried not to get my hopes up. And I didn’t even tell the kids.

But then her foster mom called and said we should come meet her. So we did.

It turns out that we didn’t stand a chance. She was sweet and cuddly and curious and playful and oh, that face. THAT FACE. 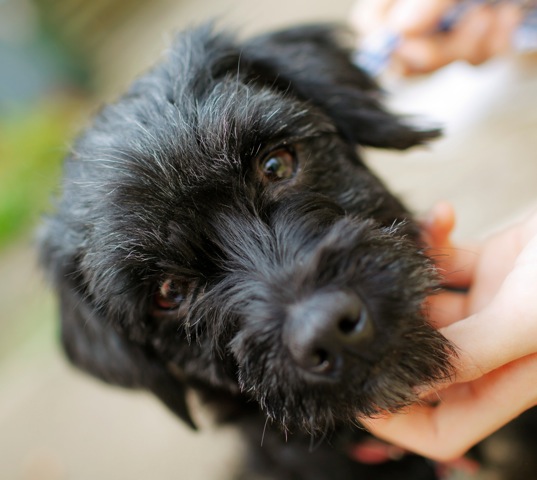 We met at the Dog Emailer’s house and got a personality evaluation on her, which basically concluded that she is spoiled rotten but “good raw material,” and then we talked about glamorous things like what little the rescue knows about her (she’s approximately three, she’s had at least one litter of puppies, she appears to be recovering from a bad case of fleas and possibly even a flea allergy, judging by the bald spots on her backside), and then her foster mom said, “Well, do y’all want to discuss it and let me know?”

Otto and I looked at each other. The kids looked at us. And we said no, we didn’t want to discuss it. We just wanted to take her home.

There was much debate over her name; despite Otto’s insistence that we name her Average, he was outvoted. Finally we settled on Licorice, which means we’re all spending a lot of time dancing around proclaiming, “LICORICE! YAYYYYY!” in an effort to teach it to her. Every time you say “Licorice” and she so much as glances your way, you then have to act like you just won the lottery. Or so I’ve been told.

She is settling in slowly; she appears to have a nervous stomach, and didn’t eat for the first day and a half, but she’s perking up now. And I urge you to LOOK AT THAT FACE one more time, so that you’ll understand why we adore her even though she made sure to throw up all over the good couch on the second day.

I think she’s gonna like it here. I already like my office better with a dog sleeping on the floor.