Licorice lasted about 2 weeks on her new glaucoma regimen before she started squinting again, and back to the vet ho$pital we went. They put her on a third eye drop, and so far, so good. So she now gets three different eye drops three times a day, but also they have to be given at least 5 minutes apart, so each dosing period is referred to as the Parade of Eye Squirts, but we’ve all acclimated. She doesn’t mind at all. (“That’s because she never sees it coming,” explained Monkey with an arched eyebrow, proving that his comedic delivery remains unrivaled.)

Chickadee and Sunny are coming home for Thanksgiving, and as we navigated Licorice’s medical issues and weirdnesses, Chickie kept reminding me that she couldn’t wait to come see her dog again. (Never mind her human family, natch.) There was a brief period of time when I worried Licorice might be in a downward spiral and perhaps would not make it to the holidays, but things are much better now. Phew.

Naturally, in the middle of this canine drama—while still insisting that I was absolutely not ready for another dog—I started looking at various rescue dog listings and just THINKING, you understand, about someday-far-in-the-future Next Dog. I did find a Very Good And Handsome Boi about 5 hours away who tugged at my heart strings, and Otto even offered to drive us out to get him, but I knew it wasn’t time, yet.

Finally, I contacted the coordinator at the rescue where we got Licorice a dozen years ago. “I’m ready to start fostering,” I told her. “But don’t get too excited because I don’t know how useful I’m going to be.”

She laughed (of course) and asked me to clarify. I explained that I love dogs—all dogs! so much!!—but that Monkey and I are delicate flowers and are allergic to fur breeds. Which is… most dogs.

“So I’m happy to foster any hair breeds, and I even learned how to do grooming during the pandemic and I have all the supplies and everything now, but I know that’s not usually what y’all come across.” A quick survey of the current dogs in this rescue’s foster network yielded a whole bunch of pitbull mixes, a few hounds, a beagle mix, and one chihuahua. (Read: no hair dogs.)

I filled out all the paperwork and was assured that while it “might be a while,” a foster would come along that would be perfect for us. I said that was fine.

Life went on, as it does.

About a week later, the coordinator texted me a picture of… a small, matted hairball with bulging eyes. “She’s at the shelter,” she said, “and I think she’s a Shih Tzu mix? What do you think?”

“GIMME THAT POOR BABY” I texted back. She was still on stray hold, but a few days later the coordinator went to visit her. I was at an eye appointment at the time (hence why I couldn’t go with) and so there I was, reading off letters and discussing my vision needs, while also constantly checking my phone, until I received the text that they were on their way.

[Sidebar: I just ordered my first pair of progressive glasses, because I am Officially Old. They’re not here yet but I went in wanting bifocals and got talked into the progressives and I am very skeptical. Scintillating updates on that to come, once they arrive.]

Understand that my hopes were not particularly high about this poor pup being a fun guest. I was informed that she’d crawled right into her rescuer’s lap, but also that she tried to bite the shelter staff when they tried to cut her (overgrown) nails. Also, she looked like this: 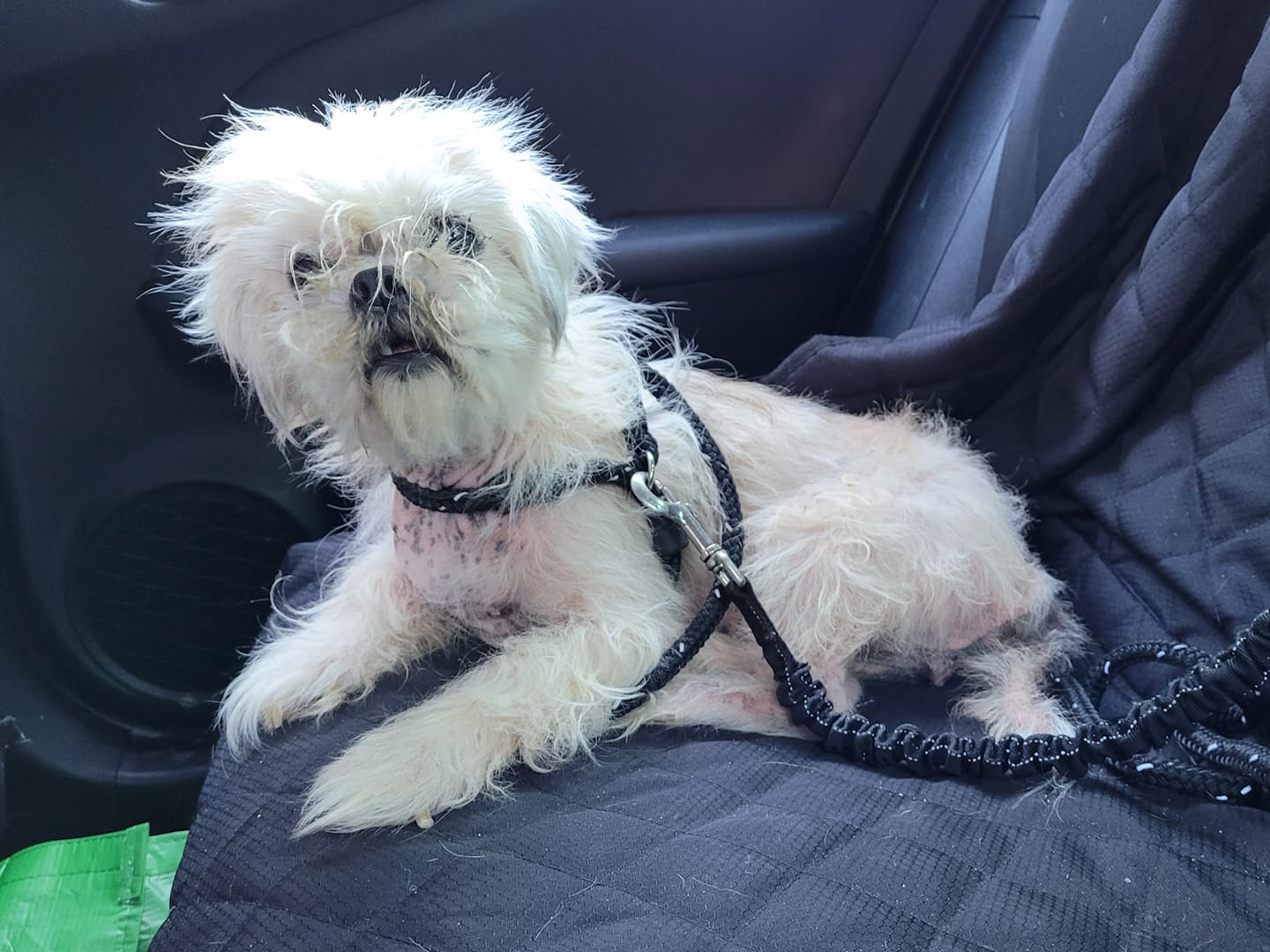 She was a right mess, is my point. But I have a fair amount of experience with itchy little dogs, so I was ready to nurse her back to health. I just hoped she wouldn’t have jaws of steel like Duncan did.

I got home from my appointment and puttered around a bit and then met the coordinator and this little disaster of a dog outside, so that we could bring her into our fenced area and let her roam around a little before going inside.

She ran here and there, squatting every minute or so to pee just a few drops, while we chatted about her needs. What hair she had was way too long, but huge portions of her body were bare or nearly so where she’d scratched it all off. Her skin was red and hot and she was covered with abrasions and weird growths. Her eyes were goopy, and she has one cherry eye (Google it, if you wish), and her nails were crazy long. She smelled terrible.

Eventually we went inside and unloaded supplies for her, including a medicated bath shampoo, and discussed the procedure to schedule vet care. She continued running around inside, and it only took her about 5 minutes to decide to squat and mark the rug in the family room (not much, thankfully). I was reminded that she might not be housebroken and held up my bottle of Nature’s Miracle to prove I was prepared.

This mess of a little dog kept skittering around and making these weird little chirpy sounds. The way this rescue works is that fosters get to name their dogs (and there’s a few rules and a list of recently used names to avoid), and so before the coordinator left us I told her I thought I’d like to name the dog Goose, but I would check the list to make sure it hadn’t been used. It hadn’t, so Goose it is.

Did she bite me? Yep. Fortunately her weird little gremlin head is the size of a tennis ball and she’s missing quite a few teeth, so I’m pleased to report that it didn’t even hurt. (Also, it was totally my fault. I was trying to trim her feet up, some, and she was still allllll freaked out and I’m sure in a lot of pain, and she let me know she was All Done, Thanks.) But also by the time I took her to the vet the next day, when the tech took her leash she ran back to me to be picked up, because she didn’t want to go.

She sleeps in her crate all night without a peep and now that she realizes this is a house and not just a different scary shelter place, she’s fully house trained. (I am not claiming I did that, by the way. I think she was once a cherished pet and just needed to remember the rules of being in a home.) She most DEFINITELY knows the word “treat” and dances for her supper and is remarkably patient for her baths, which involve letting the medication sit on her skin for 10 minutes while she is wet and shivery. The drying off, after, is her favorite part. 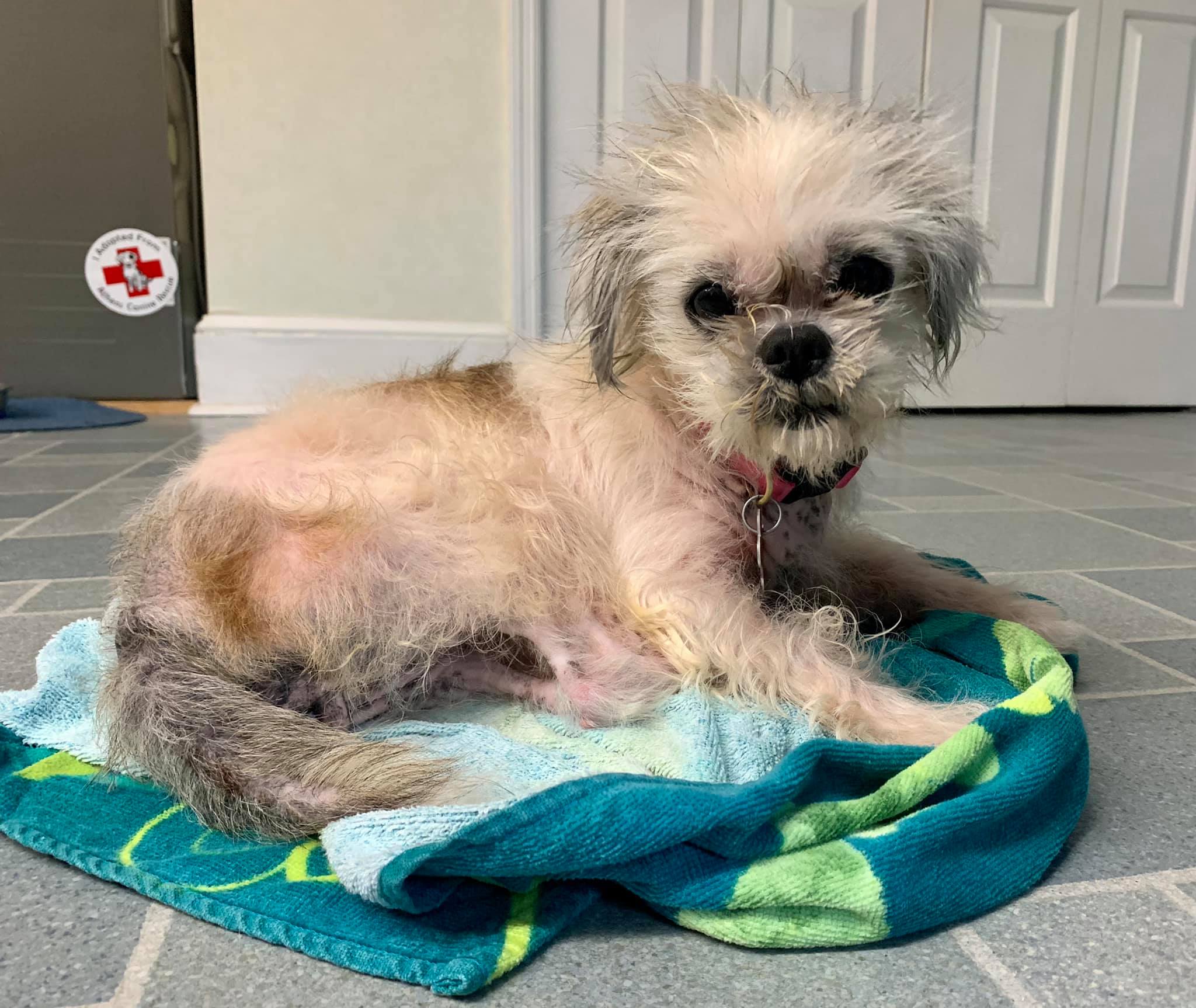 When people ask, I say we think she’s a Shih Tzu/gremlin mix. Her head is so tiny, though, I think maybe there’s some Maltese in there. Her coloring is just like Duncan’s was. When she curls up to sleep I always have to kind of do a double-take, because it reminds me so much of him, but in miniature.

By the second day she was commandeering Licorice’s toys and squawking at them while she tossed and batted them around. She absolutely sounds like an angry little goose, or maybe a disgruntled baby pterodactyl. We’ve yet to hear her bark, but I’m sure whatever eventually bursts forth will be hilarious. 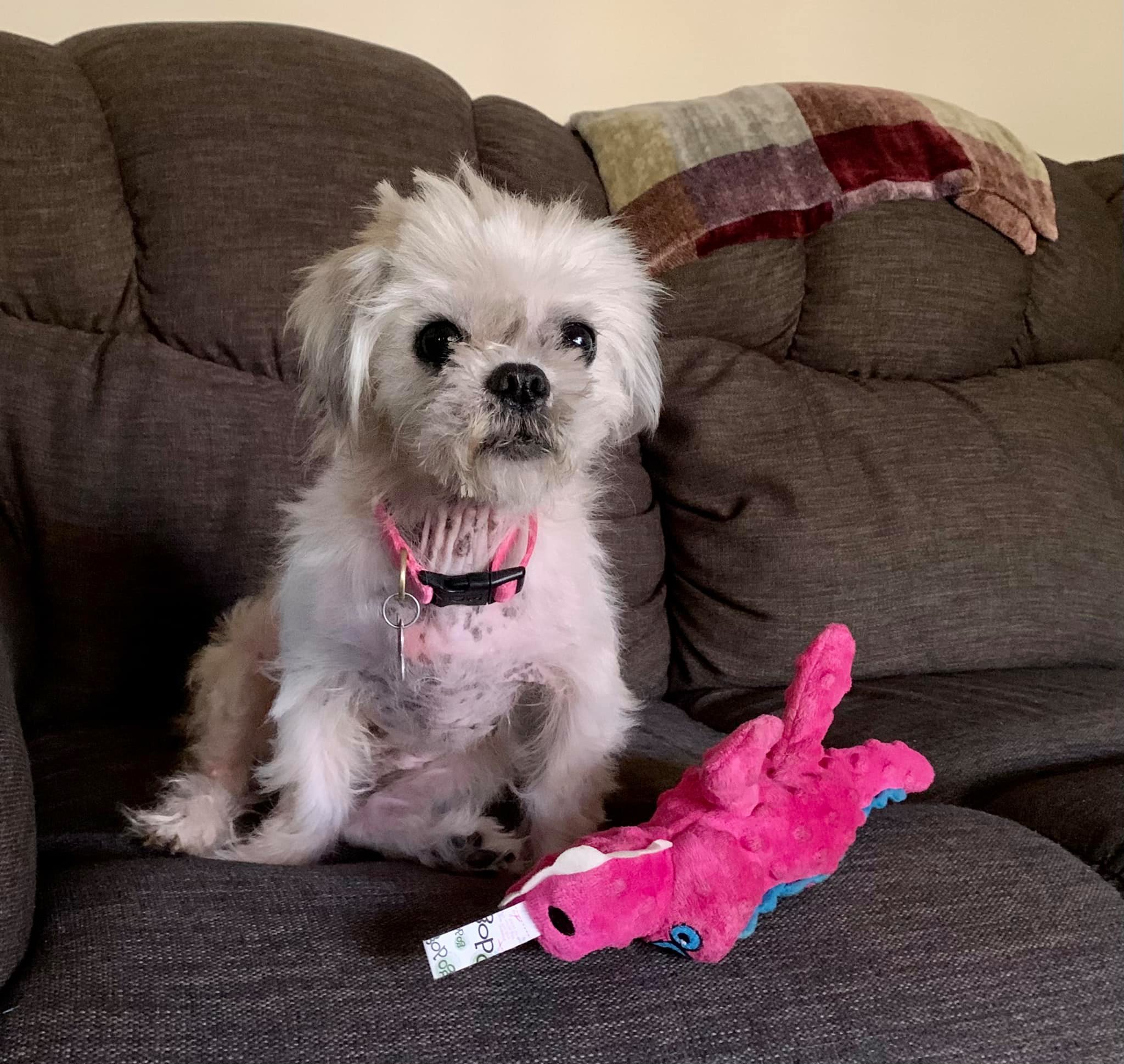 She and Licorice respectfully sniff each other each time they pass, and neither seems too interested in bugging the other one. But Licorice definitely noticed that Goose gets a treat every time she potties outside, and decided she needed a piece of that action, too. She’s no fool.

Goose curls up next to me while I work during the day, and after dinner she hops up on the couch with me. She likes to alternate digging at one end to make it just perfect for lying down, and casually walking my way before pouncing into my lap and and rolling over for me to rub her belly. If I am reclined on the couch, she army-crawls onto my chest and snuggles her head into my neck with a sigh.

She is utterly ridiculous.

As her skin improves, she leaves a constant trail of little flakes and scabs in her wake. It’s disgusting. So I try to vacuum more often, and remind myself that this detritus is an excellent sign. She is healing, which is the best kind of mess.

Yes, yes, I am already enduring taunts about “foster failing,” but as much as I adore her, we will not be keeping her. Right now we’re healing up her skin issues, and once she’s in better shape, she can have surgery. Then she needs some recovery time, and then she can be adopted. Will I cry when she leaves? Absolutely. But I don’t think she’s meant to be ours. I’m just glad we can help get her ready for her forever home like someone else did with Licorice for us, all those years ago.

Also, if you’ve never snuggled a weird little dog who sounds exactly like a pissed-off goose, you’re missing out.