We’re rather like a nature preserve, over here, if you like your nature preserve with a motley assortment of dying plants and high-strung creatures, that is. I thought before telling you the new news, I should probably cover some old news. Good old news, even!

1) We have not had a recurrence of any car mice. Thank God.

2) Nor have we had a recurrence of any possums in the pool. (In fact, there hasn’t been anything of note in the pool for a while, or maybe Otto is just no longer telling me, which would also be fine.)

3) Despite the fact that we are rapidly coming up on a year from Duncan’s “maximum life expectancy is a year past this diagnosis” vet hospital odyssey, he continues to enjoy life, food, and the pursuit of new and interesting places to pee in my house. Because he doesn’t understand English I love to explain to him how he is the worst dog who ever dogged, and no one likes him, and if he doesn’t stop peeing on my floor I am going to make him into Duncan stew. Otto—Mr. I Don’t Want Pets—gets very upset when I do this. Duncan just wags.

It’s been a pretty good time for critters ’round here, is the point.

While I probably shouldn’t refer to my human children as critters, I’m about to. Mostly because it fits the theme, and only partially because even as young adults they are still more animal than human. The good news is that after months of complaining about it and being roped into helping with it, Chickadee’s room is now relatively empty and completely spotless! The bad news is that this is because she no longer lives here. The jerk.

A few weeks ago we finished cleaning, packed up her car, and Sunny packed up her car (and we put the stuff that didn’t fit in Chickadee’s car into Sunny’s car…), and the girls caravaned all the way to Texas, which I guess is where they live now (not near their parents at ALL because did I mention they’re jerks?). It’s fine. Everything is fine. Honestly it’s great, because they’re happy and it was time; and when better to have a move-across-the-country adventure than right out of college? It’s just this whole pesky coronavirus thing, dontchaknow, which makes it feel like we may not see them for a lot longer than I would like. That’s the only problem. (Chickie has been quick to point out that Austin, where they’re living, has a mask mandate and pretty much full compliance, so she feels safer there than she did around here.)

It’s a lot quieter here than it used to be. Also, Licorice runs upstairs to check Chickadee’s room several times a day, as she does not understand where Her Girl went.

Remember, too, that in the spring the girls adopted Tinkybell/Tonkybonk/Chonkin (a.k.a. the rotund cat of many names), which meant this caravan to Texas included the cat. The cat who hates the car. So apparently Tonky yowled the entire first day in Sunny’s car until they stopped in Louisiana for the night and Sunny was near nervous breakdown. So the second day, Chickie took the cat, instead, and she called me, and we had a conversation that was punctuated every few words by *MEEEEOW* *MEOOOOOW* *MEEEEEOOOOOOOOOOOW*. “Doesn’t it bother you?” I asked.

“Nah,” she said. “When we’re done talking I’m just going to turn the music up.” (I’m really looking forward to when she has human kids, lemme tell you.)

Anyway, they made it, and then they had to unpack and get settled, and moving is stressful for animals, you know? I hadn’t exactly embraced the wisdom of adopting this cat pre-move, but they’re supposed adults and it’s their business, so okay. I asked a couple of times how Tonkybonk was settling in and finally, about four days after they’d arrived, Chickadee started a FaceTime conversation with, “Sooooo… don’t be mad.”

I wasn’t mad, on account of I am not one of the crazy people who moved 1,000 miles with a traumatized cat and promptly… adopted a second fucking cat. That seems totally logical and not at all a bad idea and also, hahaha, not my house, not my business!

The new cat is named Petey Pan (get it? get it? Tinkybell and Petey Pan?) and he only has three legs. He is objectively a far superior cat to Tonk because he’s more affectionate and purrs like a freight train, and also he hops on his hind leg like a kangaroo, which is entertaining. You might think this was an act of selflessness and love and everyone shall live happily ever after. I mean, look at them: 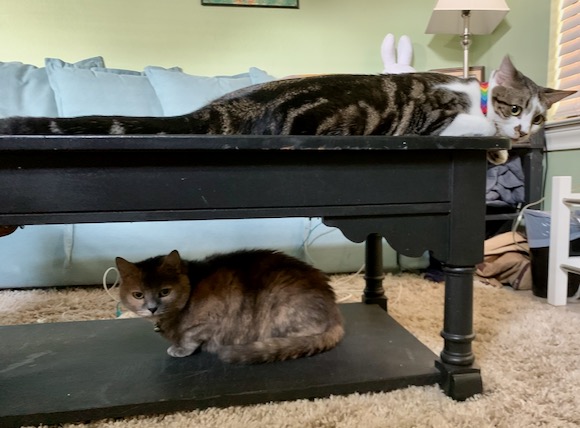 (That’s Petey up top, and Tonkybonk below. Don’t they look calm and chill?)

The problem, however, is that Tonkybonk is a mature ladycat who brooks no nonsense, and Petey is a teenager cat who just wants to play (DO YOU WANNA PLAY HUH HUH DO YA HOW ABOUT IF I SMACK YOU NOW YOU WANNA PLAY??!?), and as a result, that picture of the two of them on the coffee table is at worst a lie, and at best just a nanosecond in time. The more common pose of the two of them together is this: 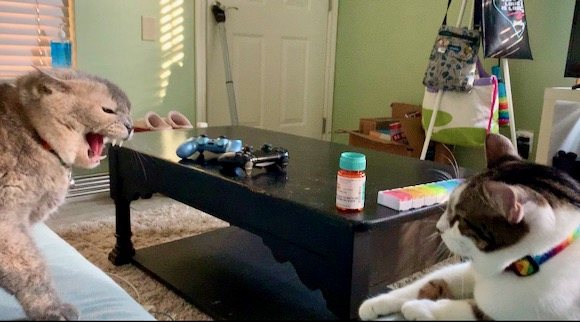 So. I guess the girls are loving their new life, complete with constant Cat Thunderdome antics, so it’s all fine. Mind you, I live with two dogs who barely acknowledge the presence of one another, so I may be a bit biased. Maybe the hissing is good background noise? I don’t know.

One last critter story! Perhaps you will recall that way back in February, my children launched a worm phalanx in our house, and what started with just Bartholomew the wiggle worm very quickly became a full-scale war. I continued to find those damn worms all over the place for MONTHS. Periodically Chickadee would ask what I was doing with my finds, and I would always shrug and say that was no concern of hers, not to worry.

Well. The day she was slated to leave, Chickie borrowed my car (on account of hers was full of everything she owns) to go to a doctor’s appointment in the morning, and while she was gone, I tied the original Bartholomew—the purple wiggle worm that started it all—around her rearview mirror. It just seemed right. She didn’t notice right away, but as we were all gathered outside saying our goodbyes, she finally did.

“Cartholomew,” Monkey corrected. We all laughed. I mean, I think I laughed. There was something stuck in my throat, and about a minute later, she drove away to start her new life.

So they left, and it took two days, but they got there, got settled, got the second cat, and I have been patiently waiting. I’m following along with job interviews and other news, and it’s been two whole weeks, and still I was being very patient, I think. Today, vengeance was finally mine.