By Mir
February 7, 2020
Category Offspring: ecstasy and agony | What do I do all day?

I think I mentioned that Chickadee moved back home with allllll her stuff, and the idea is that she’s taking this semester she should’ve still been in school to kind of decompress and tend to her health (HAAAAAAAHAHAHAHA because 20-somethings are notorious for taking good care of themselves, amirite?) and figure out what’s next, and then around May or maybe before (she said, trying not to sound too eager), she’ll move back out to another apartment, taking all of this stuff with her. We’d cleaned out the attic, some, but let’s just say that organization is not my darling daughter’s strong suit, and as a result, her entire bedroom is filled with various boxes and bins and her closet is a hazard zone and she regularly has to go into the attic for something we stored which she needs, etc.

This is all fine, by the way. First world problems, for sure. It will all get sorted. Eventually.

Approximately once a day when I’m feeling content and loving, I offer to help her go through her stacks and piles and get organized, and every time she tells me “later” or “tomorrow” or “not yet.” (Conversely, approximately three times a day when she’s driving me nuts, I ask when she’s moving out.) And so here we are, nearly two months after graduation, and everything is still a huge mess and I don’t know about you, but I am TOTALLY SHOCKED by this state of affairs.

Did I mention that Otto and I—after 12 years of wedded bliss in spite of mismatched furniture—finally bought ourselves a bedroom suite where all the pieces match? It’s like we’re grownups, or something! We listed some of the old furniture for sale, which (predictably) resulted in a number of HEY CAN U DELIVER or I WUD LIKE TO BUY IT BUT FOR MANY FEWER DOLLARS sorts of emails, and we sold a couple of pieces, but then it occurred to either Chickie or us that my old dresser is much larger than her current one, so we agreed to swap them. But. She has to clear a large enough path in her room to bring in the new dresser, clear out the old one, etc. In the meantime, said larger dresser is residing… in our family room. Just hanging out on the back wall by the front door, as large pieces of displaced furniture do. Not weird at all. I am not at all impatient to get it out of there, no. *twitch*

The point is: There are THINGS that need DOING that aren’t actually happening, and I am mildly irked about it.

Do you know what IS happening? Among the eight thousand pounds of stuff which my darling offspring brought home with her was a purple wiggle worm. Do you know wiggle worms? I did not. I said, “What IS that?” and was met by howls of laughter. Because apparently wiggle worms are all the rage on TikTok, or something. Behold: 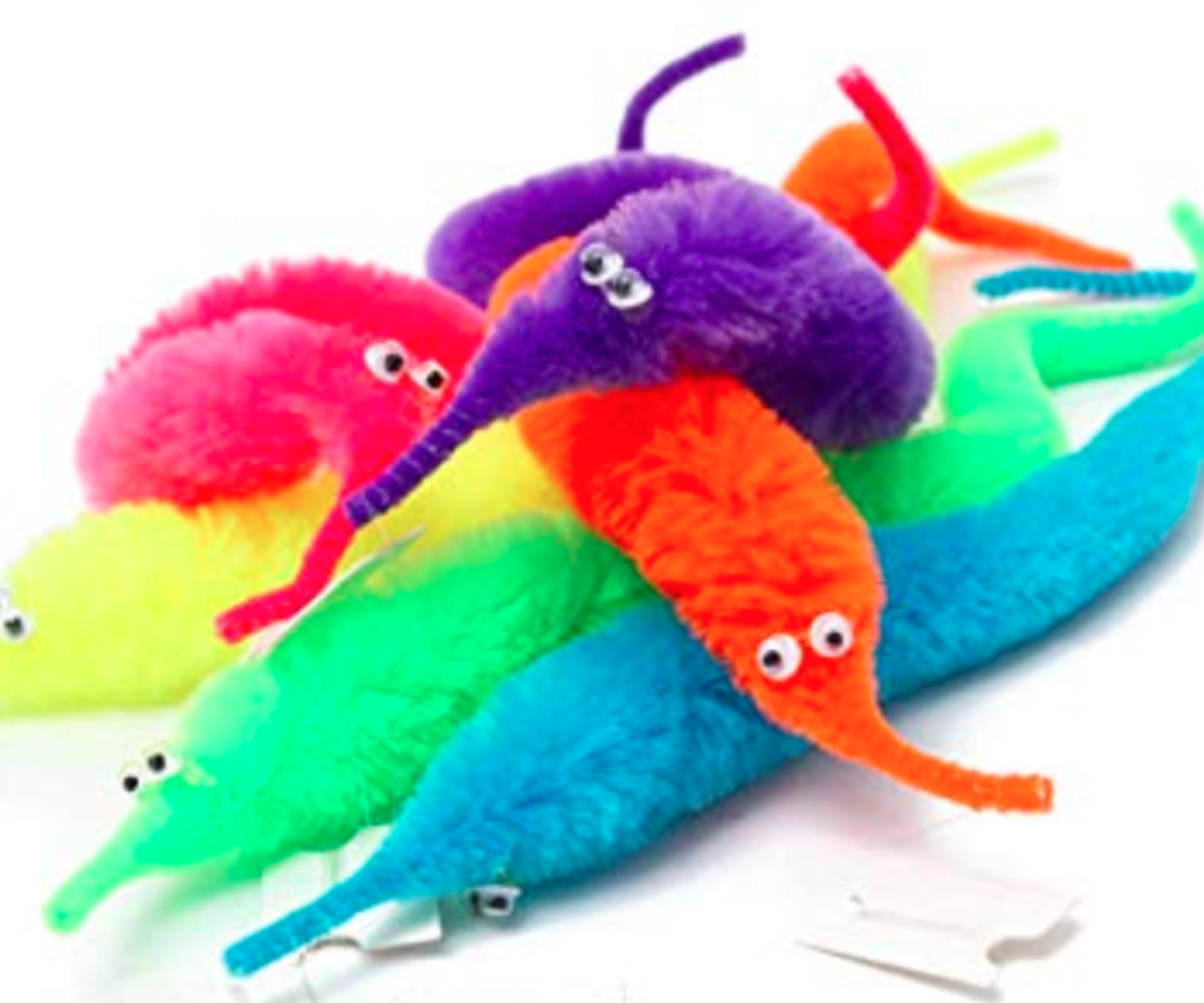 It’s a fuzzy worm on a nearly invisible piece of twine, making them ideal for the illusion of it moving independently while the twine is manipulated. Where did this worm come from? I have no idea. But Chickadee brandished it with a flourish one day, declared his name to be Bartholomew, and promptly left it on the kitchen table at some point because she leaves her stuff everywhere. I asked her to put it away and she giggled. That should’ve been my first clue.

The next day, Bartholomew dangled from the wall in the kitchen, his twine nearly impossible for me to visualize without my reading glasses (shut up, I’m old). I managed to detangle him from his perch and took him upstairs while Chickie was out. After a quick survey of the possibilities, I wrapped him around the cord dangling from the ceiling fan in her room. She runs the fan year-round, and apparently when she got home and flicked on the light and the fan started going, Bartholomew began careening around in a circle.

A couple of days later, he was back downstairs, dangling from a different light fixture. I removed him and placed him in a shoe that I’d been asking my college graduate adult child to take out of the family room for a solid week. It took her a few days to wear the shoes again and find him, but when she did, she came to me that night full of glee. “Oh, I see,” she said. “It’s on. We’re having a worm war.”

I rolled my eyes. I may have suggested that if she spent half the time she spent moving her stupid worm around the house actually, you know, CLEANING HER DAMN ROOM, she’d be done with the chore in no time. She laughed at my grumpiness, undeterred, and told me “We’re playing a game! This is SO FUN!” I sighed and left the room without comment.

And then, Otto and I left to go on a little mini trip for a long weekend, and I forgot all about Bartholomew. We ate good food and slept late and I read a whole novel cover to cover and did several paintings and we had entire conversations about things which were not 1) work, 2) politics, or 3) the children. It was lovely.

The children stayed here and took care of the house and the dogs, and even though we came home to discover a reflector had been run over in the driveway by one of their friends and they somehow “forgot” to pick up the dog poop, the inside of the house was surprisingly clean and everyone was in good spirits. Wow, adult children are GREAT, I thought! We can travel a lot more now!

Unfortunately, it didn’t take long to figure out why they were so jolly upon our return. (It wasn’t that they’d missed us, in case you’re deluded enough to think that was why.) While I fully expected to find Bartholomew lurking somewhere weird upon our return, I had underestimated both my daughter AND my son’s capacity for evil when asked to be a coconspirator. We were gone for just a few days but GUESS WHAT? In our absence, an entire package of wiggle worms had been procured, and they were FUCKING EVERYWHERE.

To date, I have removed worms from: the chandelier (Lighttholomew), the refrigerator (Fridgetholomew), the freezer (Icetholomew), my bathroom ceiling (Batholomew), the shower head in the bathroom in my office, the coffee maker (Caffeinolomew), the bottom of a vase (Vasetholomew), the laundry closet, several cabinets, the toaster oven (Toasttholomew), the front door (Greettholomew), a chair, and a few other locations I’ve forgotten. Also I only hear their names when one of the kids catches me removing one. There is still a worm dangling from the bird feeder outside my office (it’s been raining so I don’t think that one’s feeling so great…) and another attached to a sign over the fireplace about 10 feet up (Walltholomew). I am collecting them and silently plotting. And—AND!—I’ve been informed that there are “plenty” I still haven’t found.

Why, just last night in the kitchen, after I had SO GENEROUSLY (that’s what you love about me, that I’m humble and never toot my own horn…) spent a considerable amount of time giving a haircut and dye job to a friend of Chickie’s, ALL THREE YOUNG ADULTS sat there laughing at me after Chickadee cackled that there were still two missed worms in the kitchen alone which I hadn’t yet located. I am BAFFLED. And a little afraid I’m going to end up eating one.

Did I pull Monkey aside and try to crack him? Maybe. Chickie and her friend shoved him back from the brink, though, and soon enough he was shrugging and insisting that he really wasn’t sure, he couldn’t remember, who knows, worms? What worms did I mean?

But she could not POSSIBLY go through her mountains of belongings, no, she’s very busy. Busy driving me insane.

Hit me up with your best revenge scenarios. (Bonus points for emailing instead of posting here so the kids won’t see. Turnabout is fair play, darlings.)