It’s been… oh, nearly a couple of months. I would love to tell you that I was extremely busy living life to the fullest during this time, but that would be a lie. Mostly I was busy 1) being cold (yes, Georgia winters are short, but I am a delicate flower and our brief very cold portions of the year always kind of sneak up on me), 2) baking things, because why not, 3) cutting my own hair (this started during the pandemic and as I am nothing if not lazy, I am slooooowly perfecting my technique, which mostly consists of a lot of swearing and getting hair all over my bathroom), and 4) dealing with small, opinionated dogs.

The only interesting thing on that list is the dogs, right? Right!

When we last spoke (er, when I last spoke? wrote? whatever), Grok had been with us for a few weeks and had become Goose’s new favorite chew toy. Despite his startling similarity to a disgruntled preying mantis and penchant for peeing on his own legs, Grok was a Very Good Boi, and after his neuter he was listed for adoption. I thought this was very exciting, but Otto thought this was very sad, as he was convinced that Goose needed to keep him. I remained the voice of reason—that reason being, “We cannot keep a dog just because our dog likes him”—and was thrilled when I got the message that Grok had an approved adopter who wanted to meet him.

The one potential hitch: said approved adopter had a cat at home, and Grok had never (to our knowledge) dealt with cats. The solution: cat-test him prior to the meet-n-greet.

By this time, once-shrinking-violet Grok had really come out of his shell and was, like, a whole entire dog here at home. He tackled Goose and played with toys and raced around and even sometimes barked. What a transformation! I was as proud as if I’d hand-crafted his personality myself. But then I took him over to the house of another rescue volunteer to see how he did with her cats, and he turned back into Sad Grok Who Only Wants To Hide. Her dogs sniffed at him and he jumped into my lap and made himself as flat as possible. Her cat walked in and he tried to climb onto my shoulders. We went down to her basement to fetch some more supplies and he promptly took an enormous anxiety dump on the floor.

We concluded he’d be fine with a cat. And also that perhaps we should do the meet-n-greet at my house so that he’d be comfortable and not super shy.

Well. Things did… um… not go as planned. The Potential Adopter (PA) walked up to the door and leaned down to coo at Grok. Grok, in turn, took one look at her and started barking like Timmy had fallen down the well AND the house was on fire AND the enemy army was nearly to the gate. And make no mistake, some 9-pound dogs are yappy, but Grok barks like a freakin’ Doberman. The PA was clearly taken aback. I chuckled and invited her in, assuring her that he would settle down in a little bit, not to worry!

Reader, he did not settle down. At all. After he continued barking in the family room for a good 10-15 minutes while we talked, I suggested we move out to the yard to see if he might calm down. Out we went, into the soft grass and mud, at which point I noticed that PA was not just dressed very smartly (I’d seen that as soon as she came in), but she was also wearing heels. I apologized for taking her into the yard in her nice shoes. She smiled, tightly, assuring me it was fine. Meanwhile Grok ran as far away from her as possible.

I realize this is shocking, but PA did not elect to adopt Grok. He “doesn’t seem like a good fit,” she told the adoption coordinator.

This was mildly concerning, but also I do not think she was the right person for him, and he knew that. Grok may not be the brightest bulb on the marquee, but dogs know who to love. And he did not love her. So! I was a little worried, but Otto was DELIGHTED. He suggested this meant we should keep Grok.

Some more time passed, and a second Approved Adopter asked for a meet. This time we did it at the coordinator’s house (for obvious reasons), and while Grok was a little reserved, he didn’t bark, or hump, or otherwise act a fool. And they—predictably—fell in love with him. The more we talked, the more I dropped little bits of information like the whole peeing-on-his-own-leg thing, to which the PA waved and said, “Eh, I’ve had lots of Shih Tzus. You can’t scare me.” In fact, they opted to take him home that day to start their trial week.

When the adoption coordinator texted them a few days later to ask how things were going, the PA responded “He’s suffering,” followed by a picture of Grok in a tiny dinosaur outfit. When asked if they wanted to wait for the week to end to make a decision, they responded that no, “this dog can only ever be here for us to dress up and love and snuggle.” So it would seem that Grok is living his best life.

Goose—and Otto!—were a little depressed for a few days. On the one hand, I was sure a new foster would make them both feel better. But on the other, spring break was fast approaching, and we had a trip planned, and after talking it over with the folks at the rescue, we all agreed I should probably wait to take another dog until after our trip. So that was fine, and I tried to settle in to life with Just One Dog for a few weeks.

You know how the saying goes: Life is what happens while you’re making other plans. And so of course FIVE DAYS before Otto and I were set to leave town, I got a series of texts from one of our rescue volunteers. Two year old special needs Shih Tzu, owner surrender, in need of immediate placement. Could I take him? I reminded her that I was leaving town at the end of the week. “Didn’t you say your son would be home, though?” Well, yes, but I meant if I had an established foster with no extreme medical needs. What’s the deal with this dog? “Oh, he has cerebellar hypoplasia so he’s got balance issues, but the guy says he’s sweet and housetrained so I don’t think he’ll be much trouble. Can you take him?”

Of course I went and got him.

He greeted me from inside his crate by barking and snarling so ferociously, I actually gasped and stepped back. “He’s just scared,” said the volunteer who’d retrieved him. “Just get him home and let him decompress a little.” I hoped she was right.

Exactly as had happened with every single one of my previous fosters, I told myself on the way home that I wouldn’t stress Barkley (oh, yeah, his name is Barkley, though according to his vet paperwork his name used to be Wobbles, so sometimes we call him that, too) out by grooming/bathing him right away… even though by the time we got home, my entire car smelled like a barn. 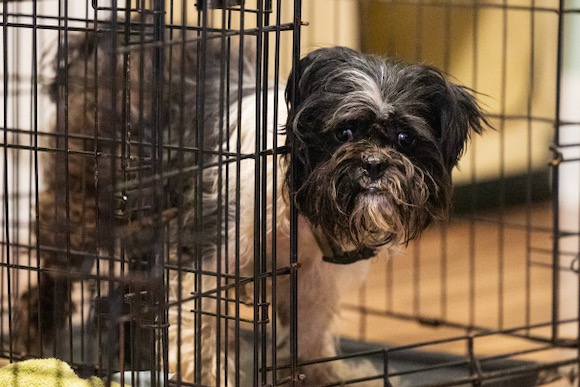 Where am I? What’s happening?

So of course I brought him in and gave him some time to chill out, but then I got out the grooming table and shaved down all his matted fur and gave him a bath, because—while I’m sure it was stressful for him—the stench was making my eyes water. 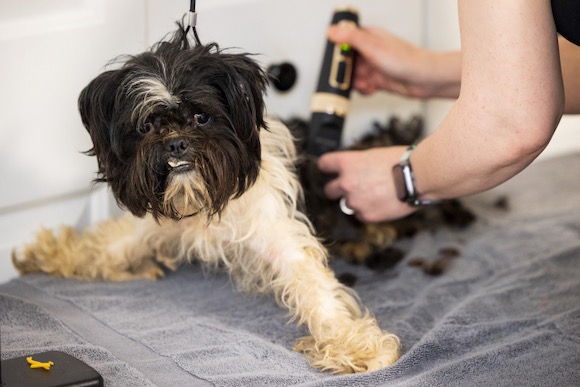 I did note during the grooming/bathing process that he wasn’t so good at standing up, but we managed. Sort of. He did pretty much give me a bath along with him.

Like Grok, Barkley seemed determined to stay in his crate for a couple of days, after which he decided he belonged in my lap 24/7. Unlike Grok, the main reason this was absolutely smothering and constant is because Barkley can’t exactly walk himself around. He lurches, he spins, he falls down. He clearly feels unstable on the ground (because, um, he’s unstable), but he tries. Lord, he tries. Example:

He’s wearing a handle harness which allows us to kind of guide him around outside (or, well, inside, but I mean we use it when he goes potty, mostly), but really what he needs is a custom wheelchair to stabilize him. Because of course he does. He has what I can only assume will be a very expensive appointment with veterinary neurology this week, after which we’ll know more about how to proceed in his care. ANYYYYYYYWAY, he turns out to be a love but he is also a LOT of work because of his mobility issues. 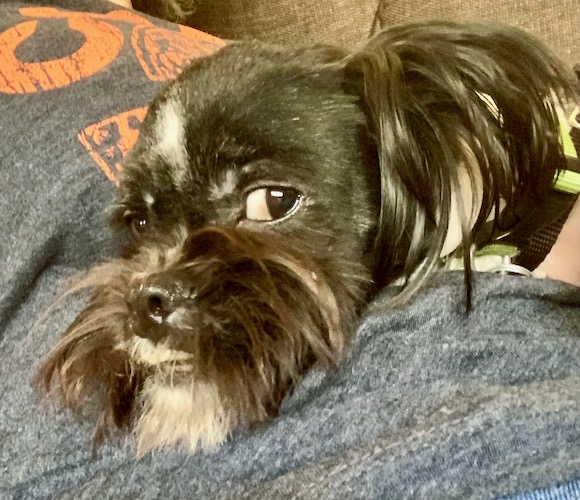 But just look at this masterful side-eye.

This is where I pause to say that we did indeed go on our trip, and Monkey took care of Barkley while we were gone. They are now the best of buddies. This is helpful because it means there is another lap he loves. Yay!

Barkley is almost exactly the same size and age as Grok, so you might think that Goose accepted him with open arms (paws?) as a replacement wrestle buddy. You would be sorely mistaken. In the handful of days Barkley was here before we left, Goose gave him wide berth and glared at me every time he was in my lap. Then we tossed Goose on the car and took her adventuring, which she liked very much. 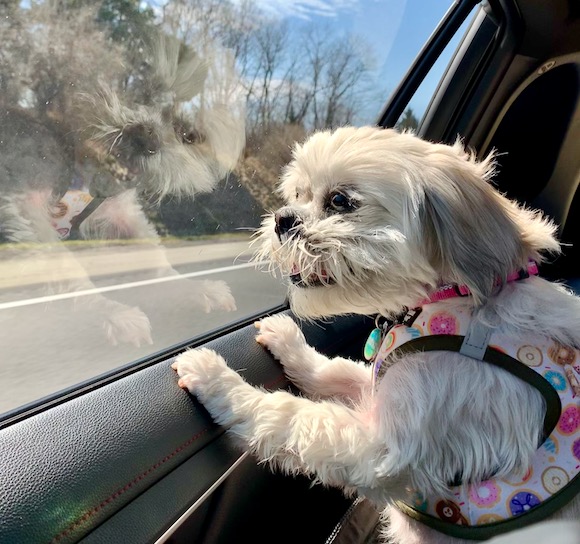 She had a wonderful time pooping in new and exciting places and getting pets from new people, and was also SO EXCITED to walk back into the house when we got home. And then she saw Barkley in Monkey’s lap, and I swear she glared at me. “I can’t believe he’s still here!” was the clear message.

In the days since we’ve been home, Barkley’s been getting braver and trying to engage Goose. He stumbles over to her and sniffs her and she snarls at him. It’s magical. Or slightly terrifying. I always get those two confused. I am still hopeful she will eventually warm up, but right now she’s definitely got the former-only-child blues.

Tl;dr: Grok got adopted by the right people. Barkley the malfunctioning pinball machine dog is our new foster. Goose had a wonderful trip but still wants to know when Barkley is leaving. I am rapidly turning into the Crazy Shih Tzu Lady.

In closing, allow me to share the unexpected magic which is… Goose with a carrot. You’re welcome. (Note that there is no audio on this one, because I didn’t realize Otto was taping and while Barkley and I were cuddling on the couch I started asking him in a sing-song voice who was a terrible dog who peed on the rug earlier, and for SOME reason, Otto didn’t think that belonged on his video. Whatever.)