Am I still sewing? I’m still sewing. I’ve lost exact count, but I’m right around 300 masks or so at the moment. We’ve done five bulk donations and I’ve sent masks all over the country to friends and family and pretty soon I’m going to learn how to make masks for the dogs. (That’s not true. They’ve barely survived the indignity of winter sweaters; I wouldn’t subject them to masks.) I have twice now been offered money for 100 masks and 1) I am still sort of terrible at this, my sewing is a little, uh, free-form, plus 2) the whole idea was to donate, so the first time I turned it down flat and the second time I asked about the money (hey, I’m not making any money right now, is all I’m saying) and it was a big corporation but the offer was… astoundingly low. So. A-donating I shall go, until the fabric runs out or the machine breaks.

I’m also doing a predictable amount of stress baking, by which I mean there are aaaaaaaaalways some sort of cookies/bars/donuts/cakes/muffins/etc. on the kitchen counter, so when you see me emerge from quarantine weighing 600 pounds, just know I did it for the kids. Yeah. That’s my excuse and I’m sticking to it. (They remain tiny rubberband-width wisps of human beings, of course. Damn them and their youngster metabolisms!)

Despite the relative dearth of activity around here, I do have three small stories for you today.

First, it’s not quite two months ago that I first tried my hand at grooming the dogs my own damn self, and although it went okay, I didn’t go as short as the groomer does, mostly because I was being cautious and nervous. As a result, even though a professional groom will last them about 3 months, both dogs are already looking a tad bit homeless, which meant it was time to saddle up with the clippers again. I did Licorice yesterday and honestly I think this time I hit my stride. That or she’s just so cute it really doesn’t matter, but c’mon, she looks good, right? 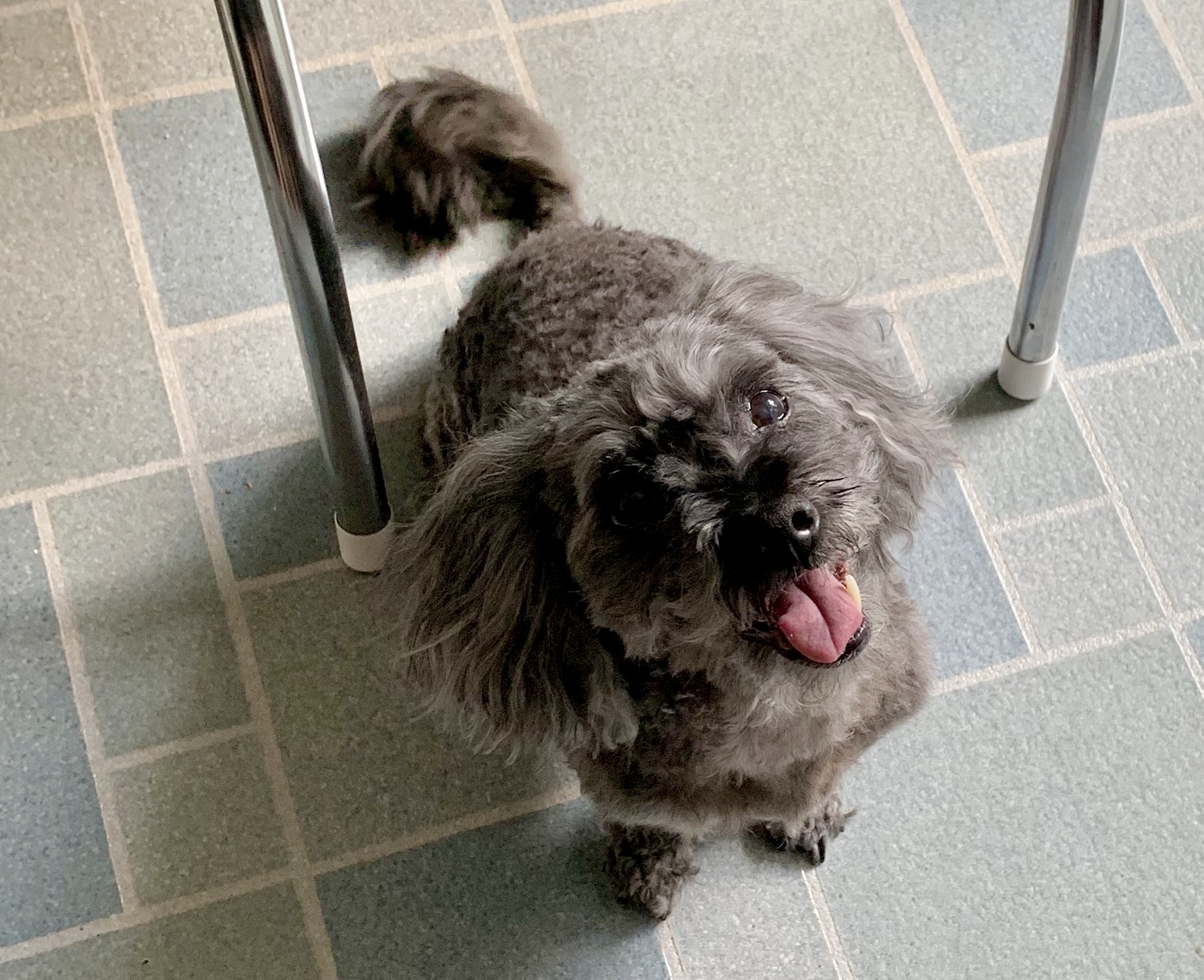 No joke, I gathered up all her fur in a grocery bag when I was done, and the bag ended up bigger than she is. I don’t quite understand how that works, physics-wise, but it’s true. She is tiny and trim except for her ridiculous floofy ears and tail, and I am super proud of myself. (Also, note how gray she is. What a ridiculous old lady she is becoming.)

Today I have to groom Duncan. Duncan (a.k.a. our favorite Lhasa Asshole) bit me the last time I tried to brush a snarl out of his face. So. Here I am writing instead of grooming Duncan. Haha. Ha. (Help.) I’m sure it’ll be fine. Once I work up the nerve.

Second, right after I last wrote, Chickadee turned 22. Quarantine birthdays are mostly disappointing, I think, plus at 22 it’s possible she’s realized that it’s all downhill in terms of hoopla after you pass 21, but whatever. We did our best to make it a fun day for her. Not a lot worked, but at least I managed one surprise that thrilled her, and that was that it’s been five years since the birthday of the rainbow dachshund Converse—which have since then been loved absolutely to death—and although I’m sure she would’ve loved an identical pair, there are none to be found, so she had to settle for a pair of genuine Pride Converse with rainbow lightning bolts and rainbow soles. They’re sold out everywhere and I maybe acquired them a looong time ago and kept it for a surprise, so she was stoked over her new shoes, at least.

Second and a half (ha), we’ve been sheltering in place for, what, not quite two months? Tying together both the dog-grooming and the rainbow shoes is that in this time that feels interminable but really hasn’t been that long, I have cut Chickadee’s hair three times and dyed it once. At this point she has a dark blue pixie and short of shaving her head (don’t tempt her; she’s done it before) there’s nothing left to be done, so I hope she’s happy with it. (She says she is.) (The pixie is really her Look but for both high school and college graduations she grew her hair quite long, for reasons which I’m not sure are even clear to her. After this last cut I said to her “There you are!” because I don’t think I’d realized—as she inched her way shorter and shorter after the last grow-out—how much I missed her signature short hair.)

Third, I’m going to attempt vegetable gardening again this year, even though my track record with the thieving squirrels drove me out of the veggie business several years ago. Also I’ve since done things like bought hanging flower baskets for the front porch and then just left them there after the flowers died, so clearly I’ve learned a lot in my time away from gardening. (I have not.) But the flower baskets in front are important because a few weeks ago it seemed like there were constantly a couple of birds hopping around in one of them, and I commented to Otto that it would be funny if they decided to nest in there. AND THEN THEY DID. So suddenly there were baby birds in my hanging flower pot and it was like I’d PLANNED to leave those dead flowers there as a gift to nature.

Very little makes me as happy as baby birds. I don’t know why.

And then yesterday we had some mulch delivered and while one of the workers was walking around outside (not wearing a mask! I should’ve given him one!) he managed to bump the planter and it fell down, which I’m sure he thought was no big deal because it was obviously an empty planter of dead flowers, except I happened to be sitting in the front room when it happened and I saw it all in slow motion and I started yelling “OH NO OH NO OH NOOOOOO” and went running outside like a crazy person, babbling about babies and practically sobbing, so in conclusion we can never order mulch again. No, wait. In conclusion, baby birds are pretty resilient, and I ran around scooping them up while this poor dude apologized profusely, and I got them all back in the nest and hung the pot back up and then waited by the window like a war widow until the mother bird returned to check on her babies. They seem to be fine. The mom was suspicious for a few minutes but then went right back to barfing up food for them, so I guess it’s okay.

Did I sneak outside and take the planter down to check on them again this morning? I did. The babies were all nestled together and, more importantly, all alive. How far must that tumble to the concrete feel like for a tiny, fuzzy newborn bird? How are they all still alive? Let’s just call it the small miracle I didn’t know I needed until it happened.