Things to do during a pandemic

Apparently we’re all supposed to be panicking about coronavirus and stockpiling supplies for the inevitable quarantine we’ll all be under in very short order. As I already buy toilet paper by the case because I’m cheap, and because I’m asthmatic but also sort of a hermit, I find that freaking out about our eventual mass demise isn’t occupying nearly enough of my time. Instead I am forced to burn daylight in other ways, which is fine because I like to consider myself a multitasker. These diversions may not work for you, but I share because I care. Use or don’t. All I can tell you is that it’s keeping me pretty busy.

Presented in no particular order, What I’ve Been Doing Lately Instead Of Waiting To Get Sick And Die:

Freaking out about politics. That’s a good one for taking up a huge chunk of time. Because HOLY CRAP. I don’t know if I’m going to catch coronavirus or not but I strongly suspect this election cycle is going to kill me, either way. I have a lot of opinions here but I am tired so let’s just leave it at that. I suspect most of you can figure out how I’m feeling.

Making keto recipes and regretting making keto recipes. I’m only sort of doing a keto diet, in that I am half-assed about it and don’t check for actual ketosis or whatever I’m supposed to be doing, plus I am eating more fat but probably not a ton like I’m supposed to, and do I need to be doing any of this, no, but periodically I like to look at my aging, expanding body and freak out and try a new diet because evidently I hate myself. So. I eat a lot of greens and broccoli and Brussels sprouts and also a lot of coconut products, and I’m not even sure I’m losing any weight on account of I have the middle-aged metabolism of a slug AND I refuse to spend major bank on supplements and such. Anyway! Much of what I eat and am “allowed” to eat is delicious (unlimited bacon? SIGN ME UP), and having already been gluten-free there’s not a HUGE change for me like there might be for someone who went from eating whatever they wanted to keto, but… I do miss carbs sometimes. So then I’ll see something like a recipe for “keto bagels” and in my carb-starved state I’ll think FUCK YEAH, I COULD GO FOR A BAGEL. Then I’ll order donut pans off of Amazon and when they come I will immediately set to baking and then—THEN!!—I will be astonished when the result is merely bagel-shaped sadness that tastes like a sponge. I mean, at least the ingredients are expensive and it all takes a long time to make! Hahaha! Ha!

But hey, if you’re a keto type and you want to know what’s actually IMHO sort of good, I have two recommendations for you. First of all, this recipe is a reasonable bread-analog, but bear in mind that I’ve been gluten-free for so long I don’t remember real bread, anyway; and second—not an ad, just something I bought with my own damn money and like—if you’re dying for ice cream, Kroger carries Rebel keto-friendly ice cream and it is expensive compared to the real stuff but pretty good. Bonus: The cookie dough flavor is gluten-free, which you won’t ever find in a “normal” ice cream, so points for that. (I have no idea what the dough is made of. Probably coconut something. Every damn thing on keto is coconut.)

Torturing my dogs. Both pups are Shih Tzu mixes (Licorice is mixed with poodle, and Duncan is mixed with Lhasa Apso, or—as we like to say—Lhasa Asshole) because three out of four inhabitants of Casa Mir have animal allergies, and hair dogs are less allergenic. (Not totally hypoallergenic, but better.) This is also delightful if you’re a lazy housekeeper (*raising hand*) because they don’t shed and there isn’t fur all over your home. Hooray! But on the down side, dogs with hair require haircuts just like people do, and over time I have Goldilocks-ed my way around town trying to find a groomer who is both 1) good and 2) not ridiculously expensive. Having the dogs groomed averages $60/each before tips, so we’re talking around $150 every two/three months and maybe that’s chump change to you, but UGH, it’s a significant expense to us.

Meanwhile, I cut hair for everyone in the family and have for… forever. So I got the bright idea that I could probably groom the dogs my own damn self with a little bit of research. (Listen, there’s YouTube videos for eeeeeeeverything nowadays. When I first started cutting hair back when I was in college I am lucky none of my test subjects decked me. Let’s just say it was a steep learning curve.) So, for less than the cost of a single grooming for the dogs, I bought myself a grooming harness (big metal bar that attaches to the table and has loops to fasten around the dog’s neck and haunches) and a decent set of animal clippers.

First I groomed Licorice, because I knew no matter what happened, I wasn’t going to get bitten. She was mad about it (SO MAD) but endured and in the end, she looked pretty good. I was proud of myself! I could do it! But I waited another week to try it on Duncan. Um, Duncan was another story. Duncan was mad about it but also really, REALLY wanted to bite the clippers, bite the scissors, and bite my face. Chickadee helped me and it took about… two hours. We were all exhausted by the end, and he doesn’t look quite as good as Licorice, in part because his coat is straight (and I suspect Licorice’s curliness hides some places that might be uneven) and in part because at a certain point I just gave up. He looks a little rough. But his hair is out of his eyes and he’s looking like a dog instead of a sentient lump of fluff, so let’s call it a win. Also let’s please not do that again for a few months.

Immortalizing my dogs. Again, not an ad, just something where I spent my own damn money and I’m a happy customer: Are you even a crazy pet owner if you haven’t ordered portraits of them from Noble & Posh? When it looked like Duncan wasn’t long for this world back in the fall, the kids and I ordered Otto a portrait of Duncan as one of his birthday gifts. And then for Valentine’s Day (so romantic! here is one of our pets’ heads on a human body, not at all creepy or weird!) we ordered one of Licorice. Proud papa that he is, Otto keeps these pictures of his furry children up on a shelf in his office, where those who stop by periodically see them and do a double-take, which really made it all worth it. 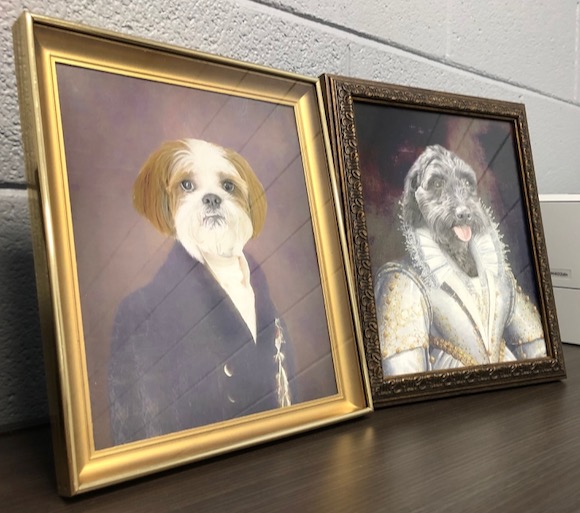 They’re both so regal! Worth every penny, man.

Being alternately enraged and amused by Poshmark. I’m really trying to make selling stuff on Poshmark a sustainable business model, but it requires a lot of patience and also possibly much less hatred of people in general than I currently possess. Various true stories:

1) Yesterday I had someone go back and forth with me on a tough negotiation over a pair of jeans (… sounds pretty stupid when I write it out like that…) and finally I relented and agreed to sell them for a few bucks less than I wanted to get because eh, I’m tired, fine. I accepted their offer and… their payment method was denied. All that arguing for nothing.

2) Over the weekend I went into my storage area to get something which required moving one of my rolling clothing racks and… I don’t know what I did—moved it wrong, obviously—but the entire rack ended up tipping over, scraping the wall, narrowly missing crushing me. In the midst of germophobia I ended up giggling for a good five minutes over the irony that could’ve been DEATH BY POSHMARK if I’d been standing just a little to the right.

3) A “customer” commented on a pair of formal high heels asking if I could model them with white socks, please, because that’s how “she” wears all her high heels and “she” “needed to see how that would look.” One, I don’t model my stuff for sale ever, and two, I don’t take free photos for foot fetishists, SO. Had a good laugh over that one, though.

4) For the first time, I sold something that I then could not locate. It grew legs and walked away. Make no mistake, my life and house are a mess, but my Poshmark stuff is impeccably organized so I have no other explanation (aliens, maybe). Fortunately it was part of a big bundle and the buyer was super sweet and happy to substitute a different item, but I had a good freakout over that one.

5) I am seriously considering trying to make a go of an in-person shopping service sort of like an eco-friendly Stitch Fix sort of thing, because everything would be thrifted, and I am a damn good shopper, y’all, and I think there’s a market need for something like this, but—I don’t know. I run into so many enraging people on Posh already, I wonder if I have the temperament to do this in-person. (Plus it would require leaving the house a lot more.)

Harassing my family. Otto has had a killer couple of weeks at work, and so I am worried about his health because at a certain point no one can keep up a grueling pace forever, not even SuperOtto. All my fretting and scolding is useless, of course, and it’ll be over when it’s over (soon!) and then maybe he will rest and recoup some before the NEXT big project, but I worry because I like him a lot.

At the same time, do you have any idea what level of sibling bickering adult children can achieve when they don’t want to perform simple chores? It’s impressive, really, but DO THE DAMN DISHES ALREADY and also maybe get a job (CHICKADEE). These two yahoos are now considering getting an apartment together and were not amused when I asked who on earth was going to do all their dishes once they no longer live with me. It remains to be seen if this plan becomes a reality but I have mixed feelings. On the one hand: Sibling bonding! Yay! Also I would like my house back. But on the other: How long before it devolves into a full-scale Thunderdome situation? They assure me I underestimate them, and little do they know that I assume my healthy skepticism is only pushing them toward doing it because I am always Dumb and also Wrong. Joke’s on them! I’m a GENIUS!

Binge-watching Atypical. I think Monkey’s therapist recommended this show to him when it came out and he politely declined, and somehow life was busy and I never got around to watching it, myself, but now Chickadee and I are binging the entire thing and I love it so much, I can’t even tell you. If you have autism in your life and you haven’t seen it, check it out. I especially appreciate the autistic traits in the characters who are not explicitly autistic, which I am inclined to believe is on purpose and masterful rather than an accident.

We’re on season three now, so I’m hopeful we’ll finish it before we die of coronavirus.