Back and even productive

My favorite thing to do after a trip—by which I mean, the thing I most often do just because I am a poor planner and also lazy—is to come home and swear at least twice a day that I’m going to unpack in just a little bit. I mean, I don’t want to brag, or anything, but I have been known to leave my suitcase in the corner of the room, untouched, for up to a month. And really, I thought that was what would happen this time, too. Somehow, though, I was both so buoyed from our trip AND so excited to return home to my dogs and my own bed (is there anything better than that first night back in your own comfy bed after being away?) that I came down with a bad case of Adultitis.

Digression: We had boarded the dogs along our route, so after packing up a gajillion things into our car yesterday morning (that’s only a slight exaggeration, as we’re the only ones close enough to drive this time, which meant we had all the food leftovers, and also somehow quite a lot of booze), we needed to kill a little time between rental checkout and pickup time at the kennel. We drove to an adjoining town where there is a 100% gluten-free crÃªperie and I capped off the five pounds I gained last week (not even kidding, also don’t even care because #worthit) in style. Then we headed homeward, stopping to get the dogs.

Licorice, as per usual, lost her goddamn tiny walnut-sized mind because CLEARLY we had abandoned her and were never coming back, yet here we were and OMGSOEXCITING and there was a lot of barking and prancing and licking. Duncan, on the other hand, was all “Oh, hey” nonchalance, which I suppose I’ll take over what happened at drop-off, which… involved a mop. Ahem. 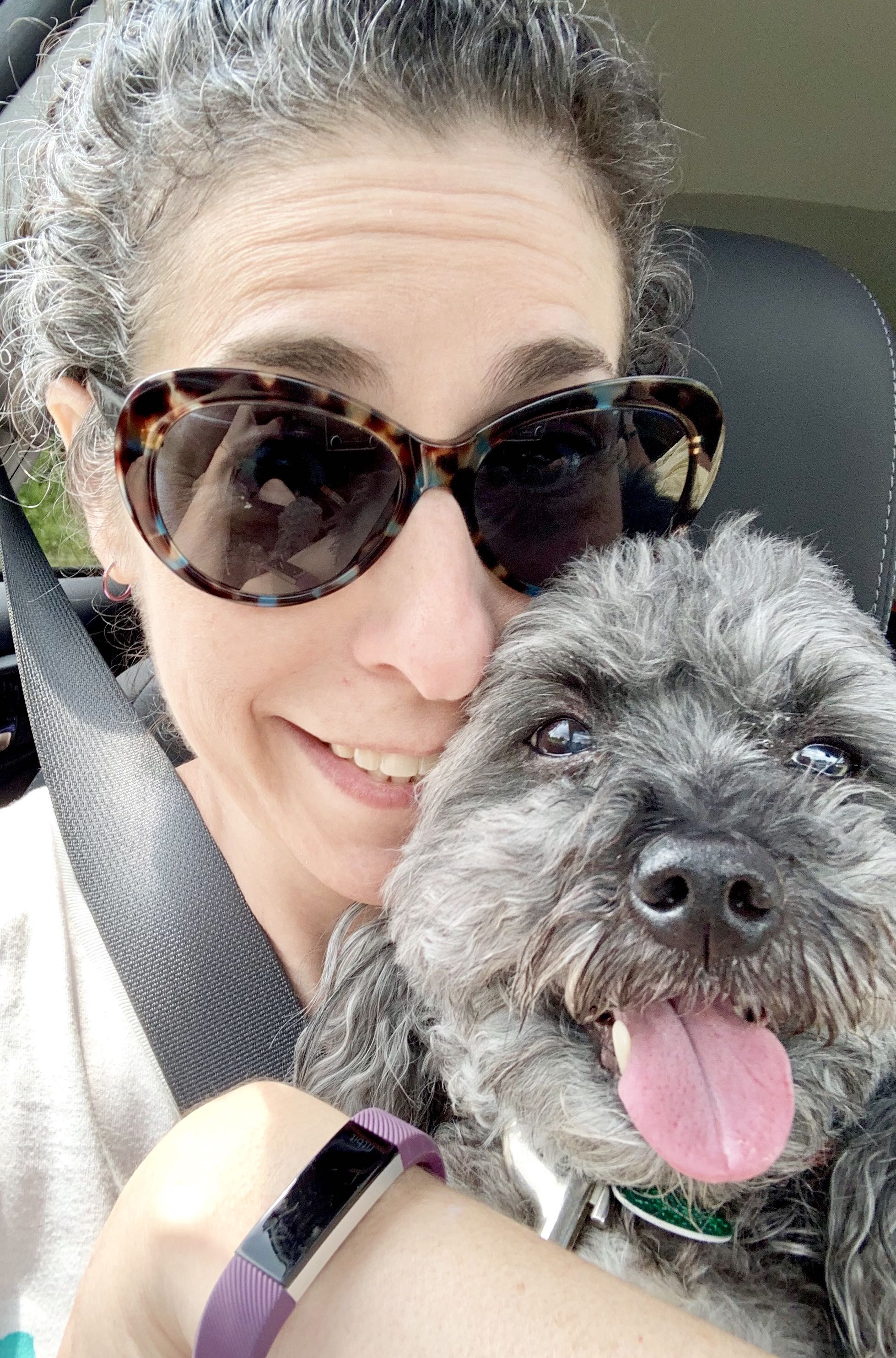 Into the car we went, and I had to send Chickie a selfie with her favorite dog because she’d departed a few days before the rest of us. [Sidebar: Licorice and I are going gray together. It’s true, that thing about owners and their dogs looking alike.] I had carefully spread a sweater over my (bare) legs before putting Licorice on my lap for the rest of the drive home, and Licorice equally carefully pranced around like a toddler on crack and managed to mangle my sweater and scratch up my legs, but she was so cute while doing it, it was hard to complain. (I managed, though. I’m talented.) Basically at any time I wasn’t holding her firmly as if I was her own personal thundershirt, she was dancing around and trying to jump into Otto’s lap or stick her tongue up my nose. I swear her tongue gets longer when we’ve been apart for a bit. 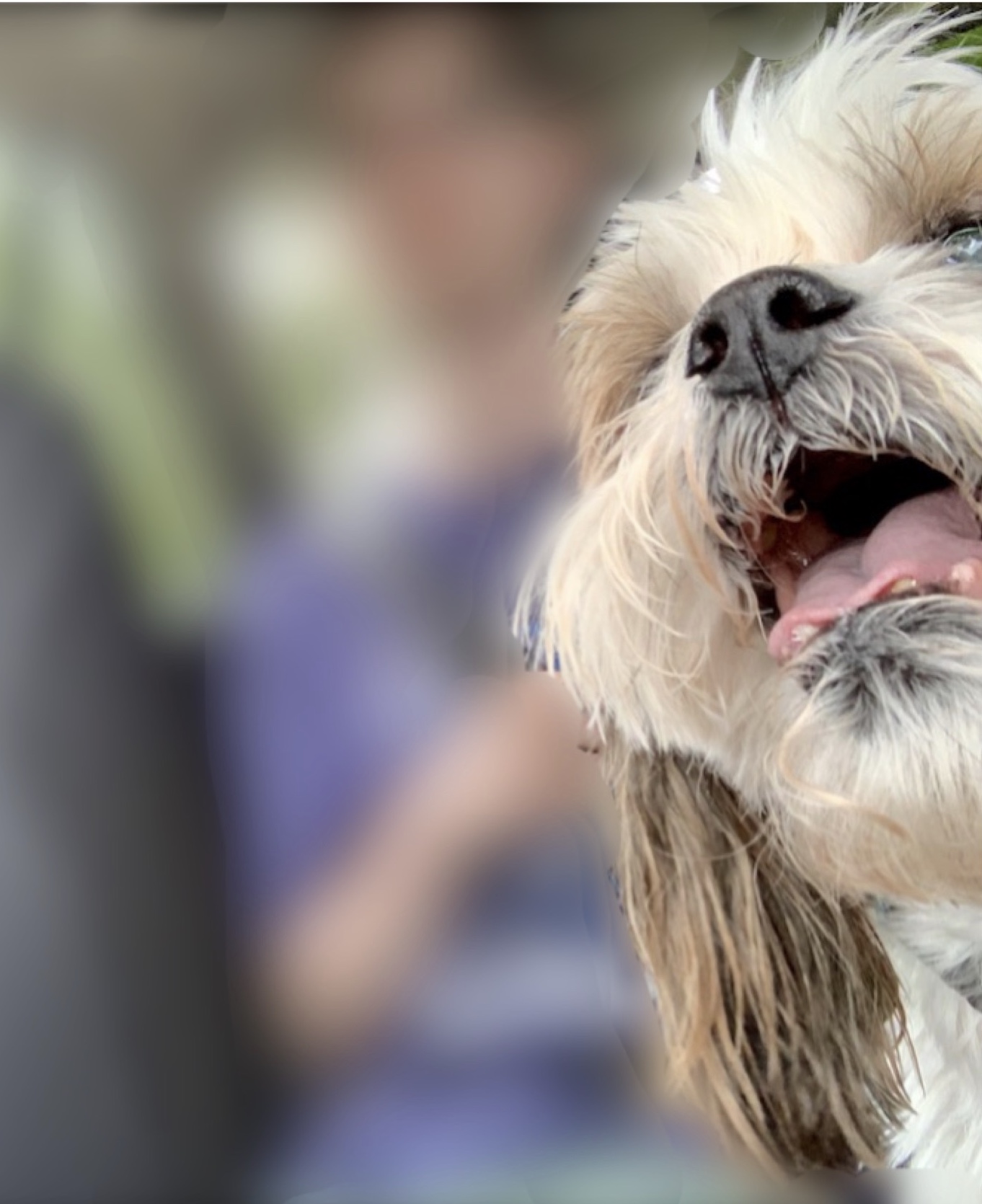 In contrast, Duncan sat in the back with Monkey and seemed not to fully grok that 1) we were his family, returning for him, and 2) we were headed home… until about halfway there, at which point every time I turned to look back at him, he looked something like this. A little stoned, maybe even a little happy? It can be hard to tell with him. Much as he had after returning from the vet hospital, though, once we got home he trotted into the kitchen, checked the food bowls, and promptly fell over and commenced snoring in the middle of the floor. We chose to take that as a good sign.

I forgot that now we will have Velcro Dogsâ„¢ for a few days, but that’s alright. Both dogs are currently snoring here in my office and I’m okay with it.

Anyway. Wait, what was I supposedly telling you? OH! Right. The dogs were a giant digression. The supposed ACTUAL topic here was adulting. (I’m doing it right now, coming back to it! Woo!) So: We finally got home and unloaded the car and put away all of the food and stuff, and Otto started his laundry and I was all “I’ll unpack my bag later” knowing full well that “later” meant “sometime before 2020.” But I was tired—we have a king bed at home and had slept in a full all week, which is a great way to test your marriage if you’re feeling adventurous—and I just wanted to sit down (and be covered in dogs, evidently, because Velcro Dogsâ„¢) for a bit.

Well, I sat, I had a snack, and then somehow I turned into a grownup. I COMPLETELY unpacked my suitcase, did my laundry, and PUT EVERYTHING AWAY (including the bag, for once) (because my other favorite party trick is doing laundry and leaving it folded in the basket forever). I listed a bunch of stuff on Poshmark and took pictures of other stuff and packaged up a bunch of stuff to ship. I refilled my empty pill case and put away a bunch of stuff I’d left out when we left and looked into my magnifying mirror by accident and then spent half an hour plucking my eyebrows. (Man, I thought I’d done that before we left. Maybe I did. Menopause means less body hair because it all travels to your face. If you don’t believe me, get off my lawn.) I made dinner (by which I mean I waved in the general direction of all the leftovers and told the gentlemen living here to find something to eat, then toasted a gluten-free bagel for myself) and did dishes and answered some emails and was in bed at a reasonable hour.

Today I have dealt with more email, brushed out both dogs (much to their chagrin), swept a plethora of leaves off our driveway, retrieved the trash and recycling bins from where they’d been hurled into the general direction of our house, mailed packages, watered all the plants, done more Poshmark stuff, made chia pudding because my sister-in-law is a good/terrible influence, ordered some necessities from Amazon, and brewed up some iced tea for the humans and some nectar for the hummingbirds (did that before I left, too, but they drained the feeder while we were gone). None of this is terribly impressive BUT remember I mentioned that my dad was going to teach me to paint? With the full disclosure that I am TERRIBLE at it, I LOVE IT. I spent hours painting last week. I have dreams about it (mostly that what I paint is better than it really is, haha). I had to make a deal with my brain that I can paint again later if I’m productive first, so here I am, killing it.

Okay, I just realized it’s past 1:00 and I’m still in my pajamas. So maybe not QUITE killing it. But still. LET ME HAVE MY MOMENT.