Here is the thing about now

By Mir
March 12, 2019
Category Haven't been hit by lightning yet! | My name is Grumplestiltskin

February sucks. Everyone agrees that February sucks, yes? I am well aware of the February suckage, and so because I am a fairly self-aware and productive human who has been in therapy for most of her life (wheeeeee!), each and every February when things get hard I keep reminding myself: “February always sucks. This is normal. Just keep going, because this is a short month.”

That’s good, right? I mean, I always feel really proud of myself while I’m doing that. No matter how long a person with depression deals with depression, one common feature of said depression (how many times can I say depression in this sentence, do you suppose?) is the inability to IDENTIFY said depression at critical junctures. This is why I gave birth to my daughter and white-knuckled it until she was about 10 months old before admitting that yes, I had a massive case of post-partum depression, and why I then had my SECOND baby, and—better informed, and so much more mature and worldy!—showed up for my 6-week post-partum check (COINCIDENTALLY IN FEBRUARY) at 10 pounds under my pre-pregnancy weight and responded to “How are you feeling?” by opening my mouth like a cod and then bursting into tears.

And so February, fucking February, man, it’s always a bad month and I always KNOW it’s a bad month and I manage to hold it together and remember that February is short and that’s GREAT. Except. Except, you see, 28 days is apparently the maximum amount of time I can manage that, plus while I am remembering that February sucks, I often forget—please try to contain your shock—that March is worse.

Why can I see the light at the end of the tunnel in February but tumble straight down into the bottomless pit in March, EVERY SINGLE YEAR, JESUS H. CHRIST? I don’t know. I should maybe figure that out!

When I lived in New England, I was officially diagnosed with Seasonal Affective Disorder at some point, which is hilarious on several levels because I can only assume every medical file with my name on it anywhere says LIFELONG DEPRESSIVE somewhere within. [Sidebar: Technically I am “dysthymic with major depressive episodes,” which in layman’s terms means I’m an irritable bitch prone to infrequent but intense periods of self-loathing. I realize this may seem foreign to anyone who doesn’t deal with similar issues. My brain is not great at contentment, despite my best efforts. Through a combination of medication and therapy, most of the time I do a decent impression of a regular person. Sometimes I can’t, and that sucks.] Anyway, for years I spent an hour every morning in late-winter-into-early-spring sitting in front of a blue light designed to tell my brain “Hey, jackass, the world isn’t ending so please stop assuming it is.” Basically lack of sunlight = Even Less Stable Than Usual Mir. Try to imagine my delight upon discovering that once I moved south, those seasonal bouts seemed to disappear. Seriously! There’s a lot more sun here in general, and definitely tons more sun in the winter. The first few years my February/March dip never happened. I gave away my blue light (those dumb things are stupid expensive) to a friend in a different state whose kid needed one. Woohoo!

But then, of course, through a combination of my body adjusting to my new environs (yes, there’s more sunlight here, but still less in the winter) and the drought ending (here, have 60 consecutive days of rain this winter!), it wasn’t long before this part of the calendar once again came to represent more bad days than good.

Did I replace my trusty blue light? No.

Did I come up with a plan with my prescribing medical professionals to adjust my applicable medications at this time of year? No.

Do I increase the frequency of therapy these months? Sometimes. (PROGRESS!)

Do I mostly just counsel myself that February sucks, February sucks, FEBRUARY SUCKS, IT WILL BE BETTER SOON, and white-knuckle my way into March, wherein sometimes things improve, but sometimes they don’t; and then if they don’t, I have a day where I end up sending a text to my husband that is both so hopeless and nasty that he immediately calls me and I answer the phone with, “Can you please just let me have this tantrum in peace?!” and it occurs to me that it’s March and I am not okay? Shut up. (Okay: yes. But also shut up.)

Am I maybe kind of a dumbass? Yeah.

So hi, my name is Mir, I struggle with depression, and it’s March, and here I am—QUELLE SURPRISE—struggling. The most prominent feature of my particular brand of depression is that I do absolutely nothing for myself because 1) why? and 2) the bulk of my life involves doing for others, and with decreased energy/faculties that’s all I can manage. This works until it doesn’t, as one might reasonably expect.

The good news is that last week I managed two acts of self-care which are unremarkable to anyone whose brain is not like mine, I’m sure, but which were triumphs for me: First, I made myself an appointment to have my hair cut for the first time in… almost a year. I am super-stoked about that because although my loooooong, curly/frizzy rapidly-graying locks fit right in with the whole “aging hippie” vibe around these parts, I’m pretty sure I have worn my hair in a messy bun for about 90-something days in a row because UGH MY HAIR IS IN MY MOUTH MY HAIR IS CAUGHT IN MY ARMPIT MY HAIR IS EXPANDING UGH UGH UGH. In a few days, I might look like I give a damn again. Hooray!

Second, remember wayyyyyyy back in January when I was ASTONISHED to learn that my thyroid was all screwed up, even though I’ve been on thyroid medication for years, even though I was gaining weight and lethargic, even though my hair was falling out (but I have SO MUCH HAIR, y’all, even as the drain is clogging I still have too much hair)? My doc upped my meds and sent me off with a follow-up for three months out. But last week—having been on the increased dose for two months—I actually PICKED UP THE PHONE and called my doctor and said, “Hey, so I know I’m supposed to wait three months, but it’s been two months and I still feel like hot garbage. This isn’t enough medication.” Again, there is nothing inherently heroic about this but for me, where I currently am, it was a Big Deal. The best part is that the doctor listened to me and sent in a new order for bloodwork and FINGERS CROSSED I’m closer to getting on the right dose to feel human again.

Long story not even a little bit shorter: I am struggling (mostly because I’m dumb and bullheaded and wait until everything is awful to NOTICE that I’m struggling) but I’m working on it. And just in case your brain is sort of like mine, allow me to say to you—in the most loving possible way—that it is March and if everything in your world sucks right now BE YE NOT SO STUPID and please take care of you. Okay? Okay.

A quick addendum just in case you’ve been waiting for the conclusion of the currants saga:

The fondly-remembered scones did indeed contain—as we now refer to them—tiny stupid raisins and not REAL currants. That was good news because I now believe “real” currants are mythical. Anyway! I used this recipe (my only variation from it was to make some lemon sugar for the sprinkling at the end). As they are made with Stupid Glutenâ„¢ I could not sample them, but they were well-received and they certainly smelled good. 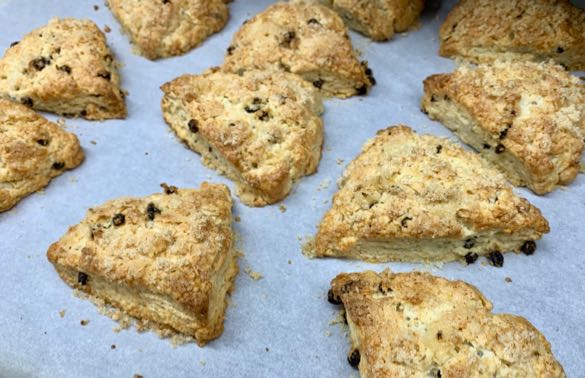 I now have another 2 cups or so of tiny stupid raisins—excuse me, ORGANIC tiny stupid raisins—to use up, so I made myself a batch of gluten-free morning glory muffins using this recipe (more or less; I subbed a banana/orange marmalade mixture for the applesauce) and they’re the perfect vehicle and also are probably the best-looking gluten-free baked good I’ve ever managed so ADMIRE MY MUFFINS DAMNIT. 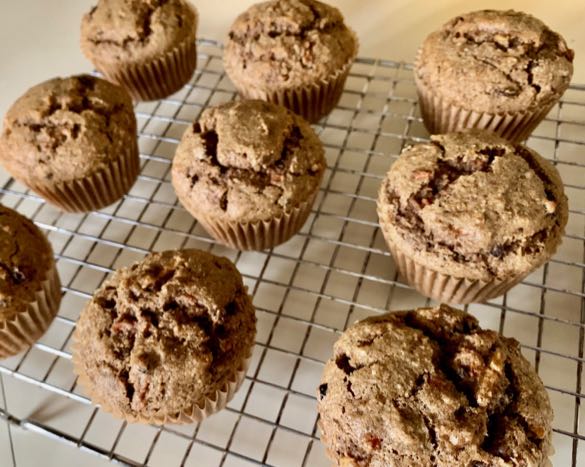 Anyway, I’ll be over here baking things and trying to get my crap together. And look at that—we’re already almost halfway through March! Thank God.