So those things happened

And now it’s 2019. Remember all of those years when Otto and I approached the new year swearing that 20whateverwascoming was gonna be “our year” finally? We don’t do that, anymore. As we approached 2019, Otto turned to me one evening and said, “2022! That’s definitely going to be our year.” At first I was horrified, and then I couldn’t stop laughing, and Otto grinned and said, “At least I can still make you laugh.” It’s a good thing we don’t need a special year for that.

I know the last post was a big ol’ wall of catch-up. On Christmas one of the gifts I unwrapped was a pen and a journal, and Otto hastened to explain that it was symbolic—I could use them if I wished, or write online, or whatever suited me best, but that he hoped I would return to writing regularly because he misses it and he thinks I miss it, too. My handwriting is nearly illegible, you know, so HERE I AM.

Understand, too, that on that same Christmas morning I unwrapped this gem of a gift, lovingly pre-ordered for me by my oldest, because I am unable to pass one of those giant tube guys out in the world without shrieking OH ME TOO and doing a terrible impression of their flailing and flapping. I like to think of my blogging as the perfect intersection of these two perfect gifts: I flail, and I write, and somehow it’s a decent representation of my inner workings, ridiculous though it all may be.

Here are some things 2019 has already brought into my life, in no particular order:

A Clean Desk
I like my office tidy, which is not the same thing as me actually keeping it tidy on a regular basis. Over time, the clutter rises, and every so often I’ll stop and clean it up and marvel at how much better it all feels. Somehow in 2018 I not only allowed my desk to become completely buried in detritus, once I finally dedicated a day to digging it out, I discovered some “tidy stacks” (read: things I’d “cleaned up” in previous years merely by straightening and/or relocating) that had apparently remained untouched for years. To wit: At the bottom of one stack on the far side of my desk was a bunch of high school report cards. FOR MY OLDEST. WHO IS GRADUATING FROM COLLEGE IN A YEAR. Soooooo… yeah.

And lest you think this was me finally getting my life in order, I must also point out that… my desktop computer suffered a catastrophic emborkening (technical term) which led to Otto (my favorite husband and also favorite technical support person) first making some tentative comments while sitting at my desk working on my computer, and then when he determined my machine would need to be switched out, asking me (multiple times) if I didn’t want to “take care of some of the mess” before he started swapping out cords, as if the mess on TOP of my desk was somehow blocking his ability to unplug things UNDERNEATH my desk. I know he has my best interests at heart and this is why I didn’t tell him to shut up, but I did finally ask him how, exactly, the towering stacks of paper on my desk were preventing him from touching the power strip beneath. And then he gave me a Very Disappointed Look and I cleaned my stupid desk.

I cleaned EVERYTHING and I DUSTED and I threw away a ton of stuff and it turned out that my computer was salvageable, after all, so it may have all been an elaborate ruse to get me off my ass, but I’m okay with that. My desk is cleared, and my monitor is now flanked by my wacky waving tube guy on one side and RBG on the other. Clearly, inspiration awaits.

Arts and Crafts
Why do I continue making a vision board every year, even though I don’t necessarily believe in the “manifest your own destiny” woo-woo or whatever that’s supposed to accompany it? I don’t know. I find it an entertaining way to spend New Year’s Day, especially if I can rope my best girl into spending it with me. (Just to be clear, every single year I ALSO invite Monkey, and every single year he surveys the seemingly endless ocean of magazines spread out on the floor and declines, running upstairs at a rate that suggests he fears dawdling may cause him to be sucked into a vortex where Oprah herself forces him to take a fearless inventory of his life while eating quinoa.)

Chickadee and I spent the day listening to music (her playlist; me asking “Who’s this?” every other song) and dissecting magazines, and in the end we each had what we needed, I think. 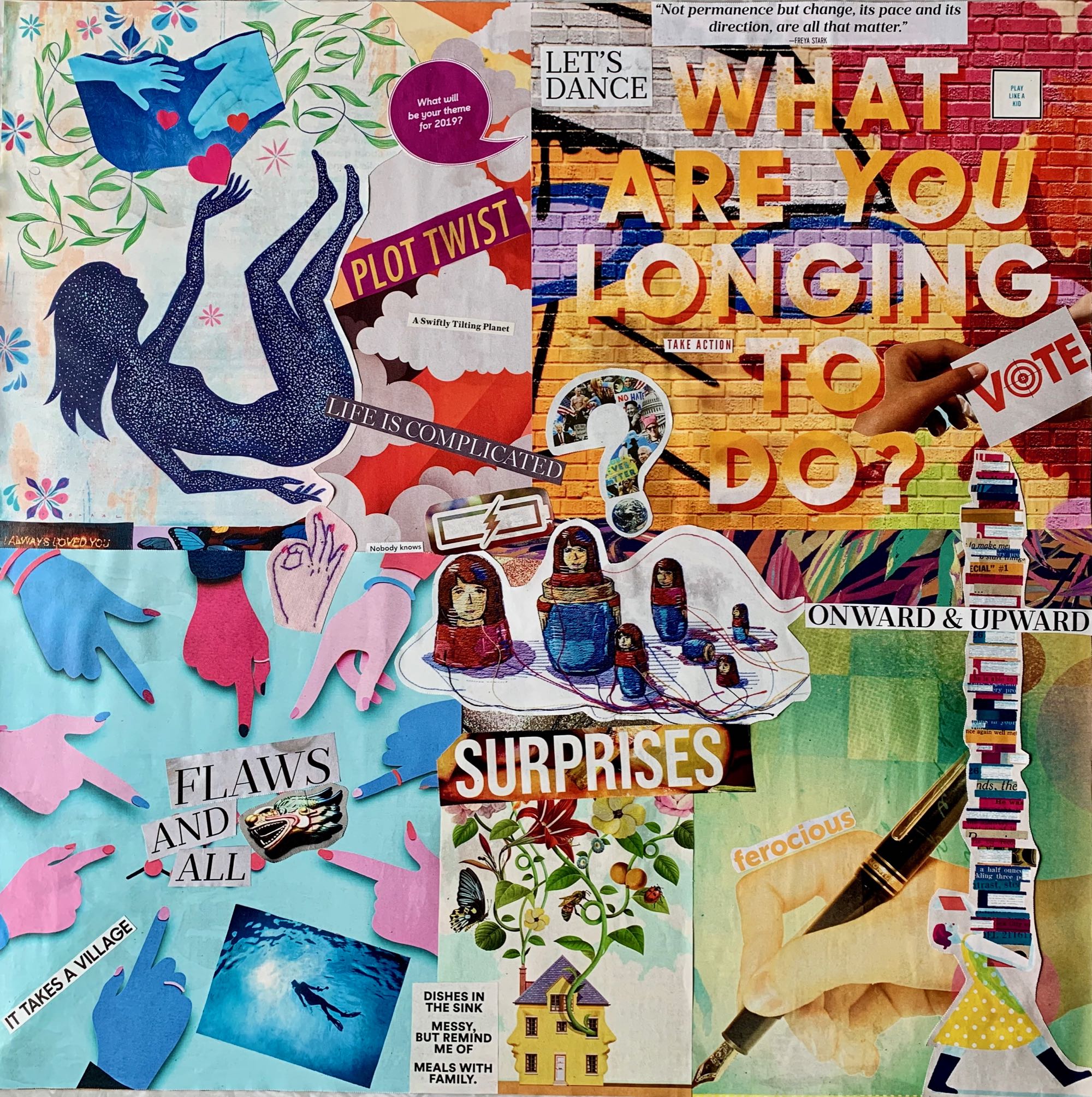 And here is hers, infinitely cooler (again, click to embiggen): 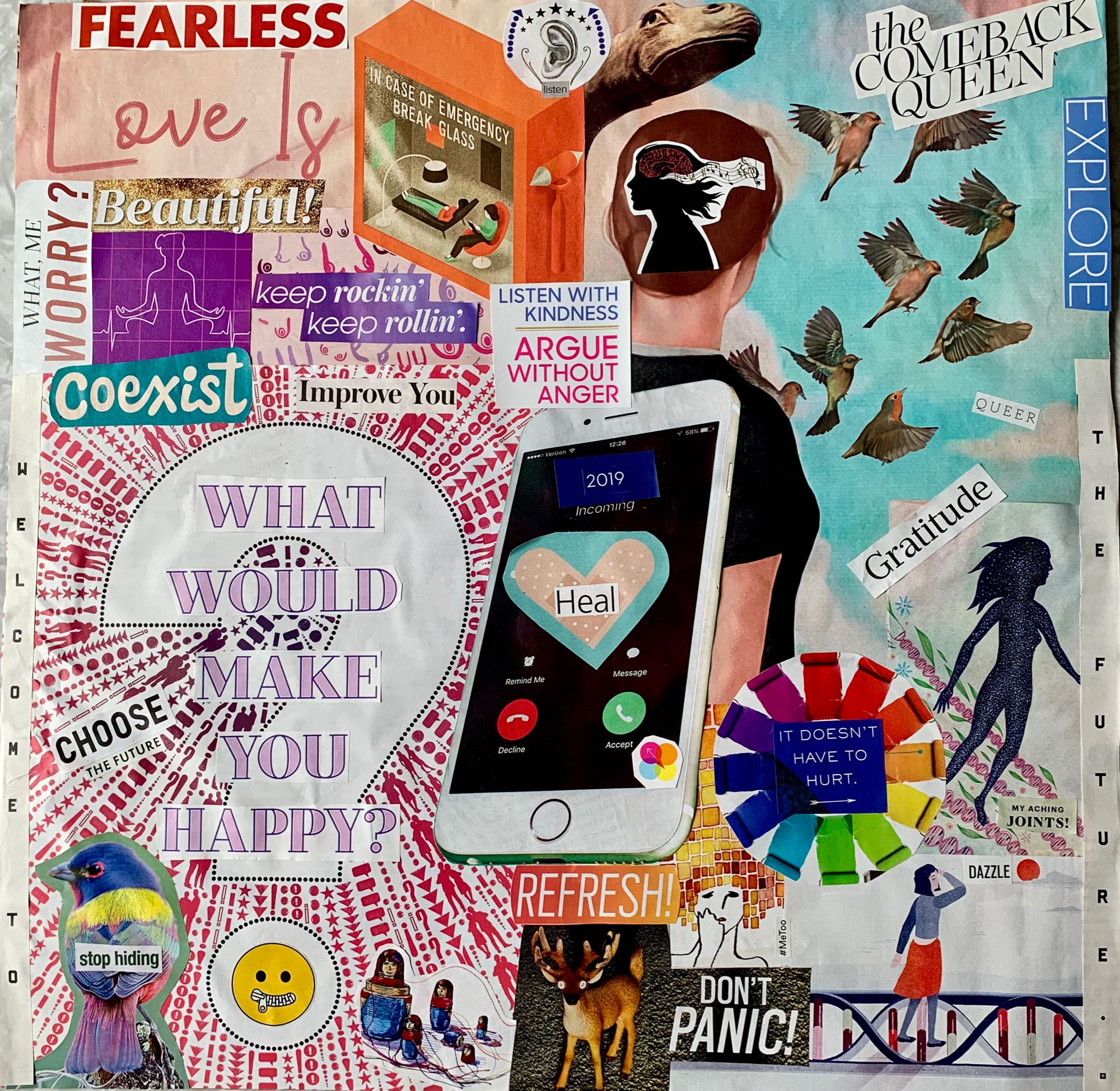 Winter break is now over and Chickadee has headed back to Tinytown, and I miss her. (I do not, however, miss finding her belongings and every damn cup we own strewn all over the house.)

A 19-Year-Old Manchild
Monkey is now 19, which is bizarre. Also, he is also impossible to shop for, but I did (among other things) get him these sneakers. I can’t really tell if he likes them, but I think they’re hilarious.

Water Heater, Water Colder
Remember how we replaced our hot water heater at the end of 2018? Well, we then became best buddies with the plumber as our brand new heater continued to be wonky and no one could figure out what the heck was going on. After a while, the plumber determined it was an electrical issue. This was very much a good news/bad news situation because the good news is that a nice electrician replaced the breaker controlling the heater and now we have hot water all the time like we’re supposed to! But the bad news is that:
1) Maybe we didn’t actually need a new heater and it was the electrical issue the whole time. NEAT!
2) While he was able to get us a new breaker, he said it was “a stroke of luck and I wouldn’t know where to go to find another one ever” and…
3) … probably we should just have our (ancient) electrical panel for the house redone because parts no longer exist and it’s not up to code and blah blah blah it will cost about $3,000.

Goodbye, I am dead. I’ll miss you.

Slow on the Uptake
Finally, yesterday I went for my yearly endocrinologist check-up, and the whole thing ended up being a major clusteryouknowhat because apparently my referral had expired a month earlier. Oops. Luckily I was able to reach someone at my primary care doctor’s office who was available and kind enough to jump through the necessary hoops, because this doctor is an hour away and without the yearly appointment I cannot have the little pills that make up for the fact that my thyroid, much like the rest of me, doesn’t work very well. Over an hour after my arrival I was finally put into an exam room and handed the results of my latest bloodwork, and I was exceedingly grumpy, already, but then I looked at the report and saw that my TSH was sky-high, like, way WAY WAY WAY WORSE than when I was first (finally) diagnosed hypothyroid and not yet on medication, and suddenly the grumpiness, the lethargy, the handfuls of hair in the shower drain… well, it all made sense.

Good news, everyone! I’m not just stupid and lazy and balding! Needless to say I’m now embarking on a medication adjustment and I hope to be human again soon.

It might be worth noting here that every other time my thyroid has been off I have spent an inordinate amount of time trying to get my doctor(s) to listen to me that Hey, it’s my thyroid, I am unwell and I bet you it’s my thyroid! This time there has been so much Other Life Crapâ„¢ going on I legit DIDN’T EVEN NOTICE I FELT LIKE HOT GARBAGE. Or perhaps I just assume a state of feeling like hot garbage was normal. Either way, I suspect that’s not good. I look forward to being able to function again in the not-too-distant future. In the meantime, I’ll be here at my clean desk drinking a lot of coffee.