Traditionally the weekend is a time to relax and unwind, to sleep in and do Super Fun Things. I mean… I assume that’s a tradition for some people? We’re terrible at that in general, though I do hold the whole “sleep in” part pretty sacred. (As I said to Otto just last night, it’s not so much that I view getting up early and packing lunches all school year long as a burden, it’s just that by May I am completely OVER it.) Anyway, sometimes we aren’t so great with the whole “Super Fun Things” notion, what with the kids’ various activities and need to be with people other than us, GOD, MOM, because we’re so terrible, plus the whole thing where Duncan has to eat every few hours, and of course the problem of me being a hermit.

All of this is preamble to say that we had a very busy weekend and I am EXHAUSTED. Delicate flowers are sturdier than me. I managed to combine two things in the most stupid way possible, but it all worked out okay in the end.

Thing the first: You may recall that a long, long time ago, we replaced our deck and added a screened-in portion and then I commenced freaking out about furniture for it for… ummm… forever. We did finally buy a table and chairs, followed a bit later by a Craigslist adventure wherein we eventually drove nearly an hour to purchase a dubious wicker seating set that was not so much “indoor/outdoor” as it was “indoor but look, put it outdoors and now it’s outdoor!” This set was… not ideal… but the price was right, you understand.

Three years later, said wicker set is looking particularly sad. The cushions are flat and faded, plus the paint is flaking off the wicker. Otto spends a lot of time out on the porch. When we entertain (I like to say it like that, “when we entertain,” as if we’re fancy and not the sort of people who text friends randomly and say, “Beer and snacks on the porch?”) we tend to hang out on the porch, and although it is happening verrrrry slowwwwwwwly, over time we are trying to make our house look like stable grown-ups live here and not a couple of grad students.

[Sidebar: Lest you get too carried away thinking we’re getting all high-falutin’ or anything, Otto is still using sawhorses and an unfinished door for a desk, and Monkey’s dresser in his room is… the dresser I bought for $50 when I started grad school in 1993. This whole turning-our-house-into-something-appropriate thing is a process.]

Once we made the decision to sell the camping trailer, of course there were discussions that followed about what we’d do with the proceeds. I immediately cast a vote for using some of the money for new patio seating. Otto thought that was a fine idea. Then, because I am me, I started looking for furniture RIGHT AWAY because we not only haven’t sold the camper, we haven’t even listed it yet, and I’m logical like that. But it was also partially because…

Thing the second: Every spring, Otto throws a barbecue for some of his students. Generally speaking, they are so delighted to go to an actual house instead of someone’s cramped apartment and eat REAL FOOD that I think they’re happy with whatever, but as the state of our janky porch furniture irritated me more and more and I realized the student barbecue was coming up, I became CONVINCED I could find us new furniture before the party.

Spoiler: I was incorrect.

Actually, I wasn’t entirely incorrect. I did, indeed, find us some furniture. On Craigslist (because of course). Just as birds go through an elaborate mating dance with one another, I, too, began the Craigslist Dance wherein I emailed this person about her furniture and she emailed me back, and then I emailed her again, and then from there we tried to figure out a time to meet and I asked for the furniture dimensions and commenced Googling for original prices and then she called me but I missed it and I texted her but she didn’t respond and so on. We did not manage to figure out getting the furniture before the barbecue.

To compensate, I cleaned my office. True, no one was sitting in my office, but my office leads out to the porch and the last time I cleaned my desk was… ummmm… well, look, that’s not really important. The thing is, life has been kind of hectic, and I have a large L-shaped desk, and it had become covered with all manner of stuff. Also my office is where the kids leave their jackets and backpacks and where we keep the shoe rack and basically everything was exploding. I cleared off my desk, I pulled approximately eleven billion pairs of shoes which no one wears from the shoesplosion pile for donation, I made the kids tidy up their piles, and I vacuumed and dusted. (In related news: Now no one is allowed to touch anything in my office, ever.)

The barbecue was fine, and if the students were offended by our furniture, no one said anything, probably because my office looked so great. Or because Otto made them burgers and I made them chocolate-chip banana bread (details!) and also because they are very polite. I love having the students over because I have very few hobbies, but one of them is telling embarrassing stories about my husband to his students. It’s great fun. Also they’re so GRATEFUL, totally unlike my own children who believe that I am just SUPPOSED to feed them or whatever.

One young woman arrived late, and when Otto introduced us she turned to him and said, “Oh, she’s so pretty!” I don’t know if I was supposed to be a wizened crone or what, but I immediately declared her to be my favorite. Hey, I’ll take what I can get.

So that all happened on Saturday, and despite Craigslist Lady having offered that maybe we could come Saturday morning BEFORE the barbecue, timing was tight what with the barbecue and needing to get the kids to/from Saturday School (’tis the season for AP exams and HOOBOY I am ready for those particular OH GOD I SHOULD’VE STUDIED MORE I SHOULD’VE TAKEN MORE PRACTICE EXAMS freak-outs to be over) and we, instead, arranged to go on Sunday morning.

Saturday we’d been up early getting the kids to their practice exam, and then Sunday we got up early and drove 90 minutes to the nicest lake house I have ever seen, and instead of buying this woman’s furniture I wanted to ask her to adopt me, because HOLY HELL I didn’t know normal humans lived in houses that fancy. Like, their outdoor patio area had a cooking area with a built-in grill, fridge, smoker, and granite countertops. OUTSIDE. Their patio was 1000x nicer than our actual kitchen inside our house. Also, to access said patio we had to walk down a set of stone steps which curved around the various levels of this amazing house and its multiple outdoor terraces and I felt very plebeian, but then I remembered that I had an envelope full of cash and I decided that probably this woman cared a lot more about THAT than the fact that I kept admiring her house with my mouth agape.

There was no negotiation; the ad had said she was firm on the price, and the set was in great shape and about half what it would cost us new, so I gave her the money and then we commenced carrying all the pieces back up the stone steps to our truck for a rousing game of Furniture Jenga.

I had my doubts, but my husband is A WIZARD. 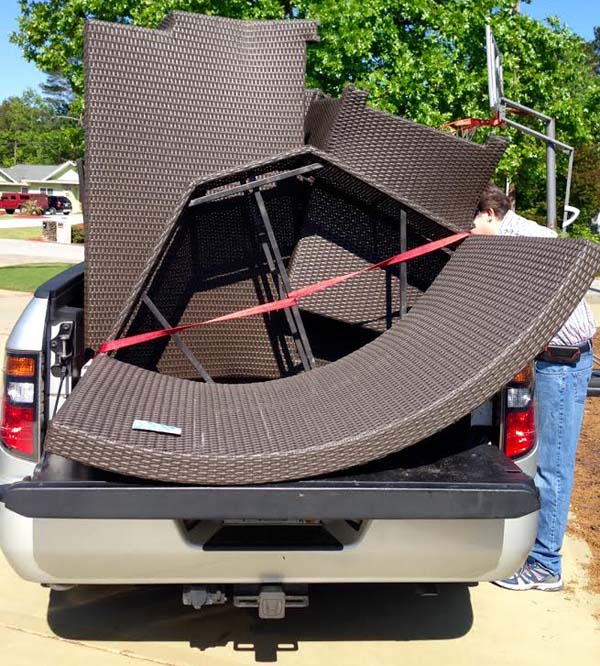 Somehow he made it all fit. Then we drove home a lot slower than we’d driven there, and then the real fun began. Otto took pictures of the old furniture (for Craigslist, natch—it’s the CIIIIIIRCLE of LIIIIIFE!), then we took it all off the porch and put it in the garage, then we unloaded the truck and hosed down all of the new furniture, then Otto vacuumed and scrubbed the whole screen porch because he is a rockstar. (While he was doing that, I went grocery shopping AND I let Chickadee drive, so really, I am a hero as well.) Later we assembled the whole shebang and spent the rest of the evening lounging around out there on our ACTUALLY FOR THE OUTDOORS furniture which is super-comfy and weather-resistant and all that jazz. I feel fancy! 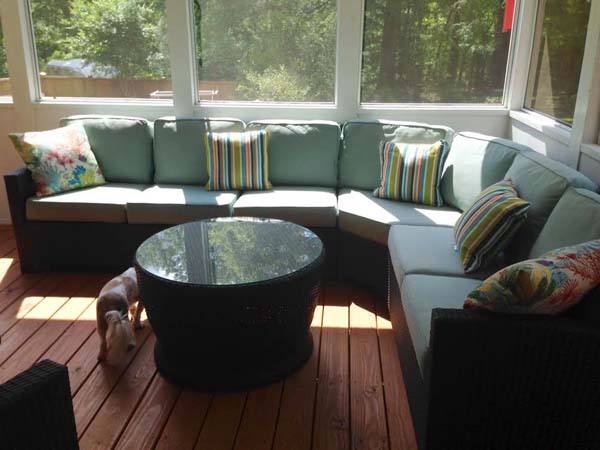 Of course, the real test was Duncan. Licorice is happy to roll with the punches, but Duncan was Highly Concerned about the flurry of activity and also we rearranged everything (the new furniture did not fit where the old furniture had been, so we moved the table to the opposite corner and the seating to where the table used to be) and remember, Duncan is mostly blind. He kept wandering out onto the porch and walking in tiny, hesitant circles, like, Hey, um, nothing is where I remember it being, what is going on here?

In the end, though, I think we got his stamp of approval. Or more accurately, his snore of approval. 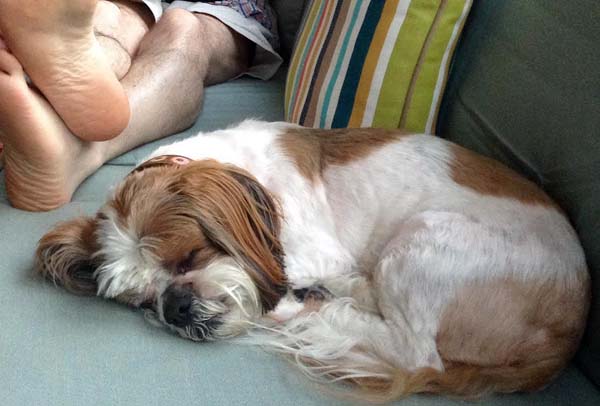 In conclusion: Clean office. New furniture. We had a party. Would you like to buy a crappy wicker furniture set? And I am tired.