I keep trying to figure out how to tell you all of the cool stuff about our trip in some sort of logical way (i.e., in an order that makes sense, and also in such a way as to not sound like a privileged asshole, because HEY fun family vacation my dad paid for, that’s some serious good fortune right there), and I still haven’t figured it out. To at least begin, I figured it might be best to start to start at the end.

Actually, first let’s go to BEFORE we left, then we’ll talk about what happened when we got back.

Back when we decided to adopt Duncan, part of the impetus came from this incessant anthropomorphizing I engage in, which led me to believe that Licorice really “needed” a “sibling.” (Both of these words in quotes to acknowledge that I’m ridiculous. I KNOW. Shut up.) Anyway, I’m mostly home, but EVERY NOW AND THEN we spent a whole day out of the house or… we go on vacation. Wouldn’t it be nice for Licorice to have another dog with her for those rare occasions? Like, say, when we go to Colorado for 10 days and leave her at the kennel? Surely it would. One dog alone at the kennel might assume she’s been abandoned and be stressed out in unfamiliar surroundings, while TWO dogs at the kennel would cost an entire mortgage payment be comforted by one another and be less stressed. Surely. Right?

So Otto took the dogs to the Puppy Spa before we left, and verified that they could share a run, and then because our kennel is specifically designed for deranged dog lovers like us who dote on our precious schmoopykins, we had to also decide on the menu of “extras” we wanted the dogs to have. Most kennels will offer a walk for boarding dogs, but at this place they call it a Nature Walk (and you can pick your timeframe), plus here you can opt to have them receive Frosty Paws every afternoon, if you’re that sort of sucker. (I am.)

Otto asked for Licorice to get a walk every afternoon.

“Just Licorice?” asked the nice lady behind the desk, clearly exercising restraint but wondering why Otto was the kind of monster who didn’t want Duncan to also have a walk.

“Well, you’re welcome to take Duncan along, too,” he continued. “But that would make it a Nature Carry instead of a Nature Walk. He’s not really much of a walker, and he has bad hips.”

[Given the caliber of the Puppy Spa and some of the other folks who board there, I think she was probably just relieved that we were okay with him being left behind and didn’t demand they carry Duncan around every afternoon.]

So the dogs were left and we went on our trip. A few times during our vacation—I cannot tell a lie—I did turn to Otto and say, “Maybe we should just call the kennel to check on them.”

“They’ll call us if there’s a problem,” he would always say, somewhat bewildered.

“Well, sure, they’ll call if one of the dogs DIES,” I said. “But what if they’re just SAD? Or HOMESICK? Why don’t they have a puppy cam at a place this expensive, so that we can peek in on them??”

Then Otto would shake his head, probably wonder why on earth he married me, and wander off after assuring me that the dogs were FINE.

We got home from Colorado too late at night to pick up the dogs, but such is my canine-related mental illness, we left the house at 7:30 the following morning (which felt like 5:30, because we were still on Mountain Time) to be at the Puppy Spa the minute the doors opened, to fetch MAH BABIES. I pictured a heartwarming reunion akin to every viral “a soldier comes home and his dog is happy to see him” video I’ve ever seen. It would be epic. Probably both dogs would refuse to let me out of their sight. (Or, you know, in Duncan’s case, out of the sight he would have if he wasn’t blind. Details.)

Licorice spotted us immediately and began whining and yipping, and the moment the worker put her down, she commenced leaping into the air, wagging so hard she kept falling over, and licking every available bit of skin she could access on Otto and me. Have you ever heard a dog CRYING WITH JOY? It’s a terrible racket, actually, but sort of heartwarming once you get over the fact that your hearing is being damaged. Licorice was BESIDE HERSELF, so delighted and relieved was she to discover that we had not, in fact, abandoned her. This was exactly what I had pictured.

Duncan… well, he didn’t bite anyone. That’s good, right? Duncan sort of wandered around the kennel lobby while Licorice spazzed out, allowing us to pat him a little, but seemingly unconcerned about our presence either way. I guess maybe he wagged a little.

It was a pretty stark contrast, is my point.

Because I am me, I subjected Otto to a verbal barrage on the drive back home. “Do you think he’s okay? Why wasn’t he more excited to see us? Do you think he’s mad? Do you think he even REMEMBERS us? Maybe he was so traumatized by past mistreatment he just has some sort of attachment disorder?” To his credit, Otto never once just turned up the radio to drown me out. He listened patiently and reminded me that Duncan and Licorice are very different dogs, and assured me that everything was fine, and that maybe I shouldn’t worry so much.

We got home and let the dogs loose on our (sleeping) children, and Duncan did seem to perk up a bit, then, so I tried to believe what Otto said, that everything was okay. Duncan is just different that Licorice, that’s all.

Well. Since then, Otto has diagnosed Duncan with PTSD—Post Traumatic Spa Disorder. Duncan continues to be his usual, low-key self… but he is also stalking me around the house. Mind you, he’s not any more affectionate or anything—if you want to pet this dog, you basically need to sneak up on him (a family favorite: scratching under his chin until he rolls over, then squealing, “I am rubbing your belly against your will!” while, y’know, rubbing his belly against his will)—but he no longer wanders off to nap on the couch. If I’m in my office, he’s about a foot away from my chair. 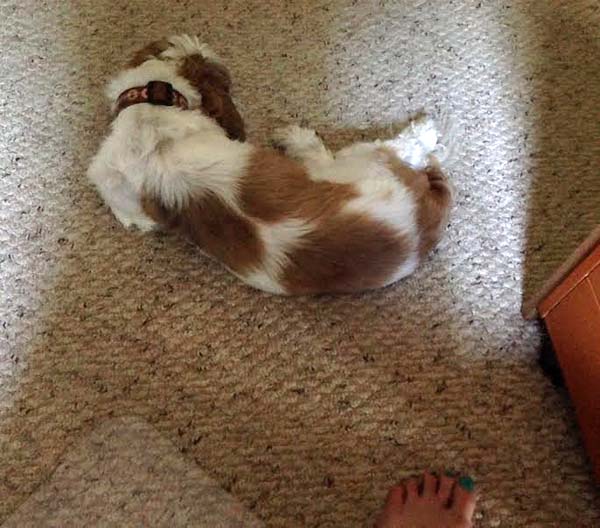 If I go into the bedroom to work out on the elliptical, he follows me in. If I shower, he lies down on the bathroom threshold. If I go out to work in the garden, he trots along after me.

It’s very weird. I mean, Licorice’s version of love is a lot… slobberier. She wants to be in my lap and licking me, when she wants attention. Duncan’s MO is a lot more sort of, “Oh, don’t mind me. I don’t need anything. But I just want to know you’re here.”

This morning Otto was getting ready to head out and do some yard work, and after a couple of calls to Duncan, managed to get him to get up off the floor to report for a quick ear rub. “I don’t care what anyone else says, Duncan,” Otto said to him. “You’re a pretty good dog.”

Indeed he is. He’s a little weird, and maybe a little broken, but so are the rest of us. He fits in here just fine.