By Mir
December 23, 2013
Category My name is Grumplestiltskin | Oh look! Something furry!!

Oh, look. I haven’t been here for a week. No explanation or anything, just *poof*—GONE. If it’s any consolation, that week took about three years, in my mind. What? That doesn’t help? Well, now I’m just going to make it worse by saying, “We are all fine (now) but due to the nature of this particular suckitude, I am not at liberty to discuss it at this time.” And now I want to punch myself in the face, so we’re all on the same page, I think.

[I know. I KNOW. Here, let me give you details as best I can: Something Really Scary And Sucky happened, and while we were trying to deal with that, Something Completely Unrelated But Equally Sucky happened. The first thing was no one’s fault but the second one was 100% preventable with my general life mantra of “don’t be an asshole” (which turns out to be really hard for some people). One situation is now cautiously resolved but the other may end up in a lawsuit and have I ever mentioned that I hate everything? Because sweet baby Jesus, I really kind of hate everything. And THEN my work computer died, because the only thing that week was missing was a giant, expensive inconvenience. Not that I was getting any work done last week, anyway, of course, but there you go.]

And how was YOUR week?

The good (?) news is that the dogs have definitely picked up on the recent stress and have decided to put aside their differences in the interests of a nightly snuggle: 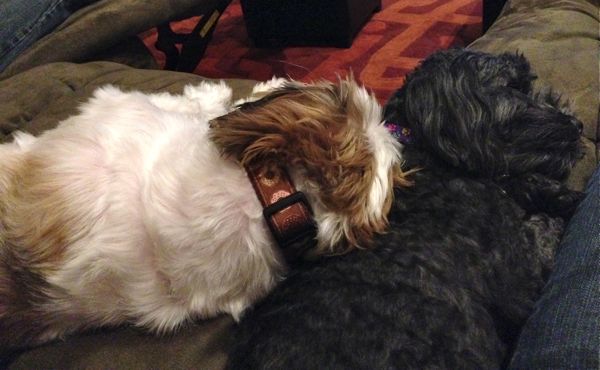 If I’d managed Christmas cards this year, I would’ve used that picture. Peace on earth! Or at least peace on our couch. Those two little hairy beasties are helping to keep me sane, which we all know is no small task.

Here’s to a better week all around.