Why am I even surprised?

By Mir
May 20, 2013
Category My name is Grumplestiltskin

We knew, not even very far into it, that fixing the pool was yet another Curse Of Casa Mir project, doomed from the start. What could go wrong, would go wrong. Obviously.

Much went wrong. So much went wrong, they had to redo the liner entirely, which meant the first one was taken away and a second one installed last week. EVERYTHING IS FINE NOW, they assured us. LOOK THIS LINER IS PERFECT, NO PROBLEMS, PLEASE DO NOT PUNCH ME IN THE FACE, they said. (The “please do not punch me” part was possibly implied. I never threatened to hit anyone. Not out loud, anyway.) They came while Otto was teaching his summer class and took out the old liner and put the new one in and then scampered out of here as fast as they could, probably because they knew I am a woman on the edge and also Mr. Completely Unflappable was considerably flapped by this entire adventure.

Otto came home; we finished filling up the pool, and then commenced dumping all the chemistry in the world into the water, to the tune of several hundred dollars. (Why do I mention this? The liner itself was a 4-figure job, why split hairs about the cost of the chemistry? BECAUSE I AM BITTER, THAT’S WHY.) When you start from scratch, there’s a bunch of stuff that has to go into the water. The salt for the chlorinating system, plus stabilizers and pH balancers and I don’t even know what. All I know is that we dumped and stirred and then I said to Otto, “Wouldn’t it be funny if we went to turn it on and the filter doesn’t work, after all of this?”

Ahahahahahahaaaaaaa! You thought the filter turned out to be broken, but no, even though I clearly tempted fate, Otto threw the switch and the pool circulation burbled into life and everything was FINE. Hooray! Our long national nightmare was finally over!

Monkey promptly asked if he could go swimming. We pointed out that we’d just dumped a ton of chemicals in the pool and he’d have to wait a couple of days. He made a very sad face, because we are meanieheads.

So this all happened on Friday, and JUST IN TIME, too, because Otto was going out of town for the weekend. I was quite literally still pushing the big pool-broom thing around in the pool, helping the chemicals dissolve, when he left for the airport. “Have a good trip, honey!” I called. “I am SO GLAD we got this all fixed before you had to leave!”

[Insert the foreboding music of your choosing here.]

Ordinarily the way you keep your pool happy is to run the filter on a timer, but when you’ve just dumped in all your starter chemicals, you need to run the filter continuously for a couple of days. So Otto left and the filter ran overnight and when I got up on Saturday I heard a funny noise so I went outside to investigate. The funny noise turned out to be the sort of slurping/sucking noise that the skimmer basket makes when the water level is getting low.

I stood there, staring at the pool, trying to process this information. Because… we’d just FILLED the pool. THE DAY BEFORE. The water level couldn’t be low because if it was low that would have to mean we had a leak somewhere. In our brand new liner. And then I was going to have to throw up, kill people, and die.

I called Otto, who suggested I go check the filter and related mechanics under the deck to see if anything was obviously leaking over there, because maybe it wasn’t the liner at all. Probably it wasn’t the liner; maybe there was a leaky pipe or something. Well. Otto is smart, you know. Turns out that there’s a cap that goes on the outflow spout of the filter, and it was visibly leaking. I figured this out because the entire area under our porch was a swampland, and also because there was a steady drip of water from said cap.

Phew! Not the filter. Apparently the cap comes off for the winter, and Otto said maybe he just hadn’t tightened it down enough when he put it back on. I tested it, and couldn’t tighten it by hand, so I got some pliers out and tightened it, but it was still leaking, so Otto said maybe the cap was cracked and I should take it off and get a good look at it. By now I’d shut the filter down, so I got the cap off and examined it (while all the water ran out of the filter and pooled around my feet, yay), and it looked fine. No cracks.

But then I looked at the spout itself, and that was a definite, “Well THERE’S your problem” moment: 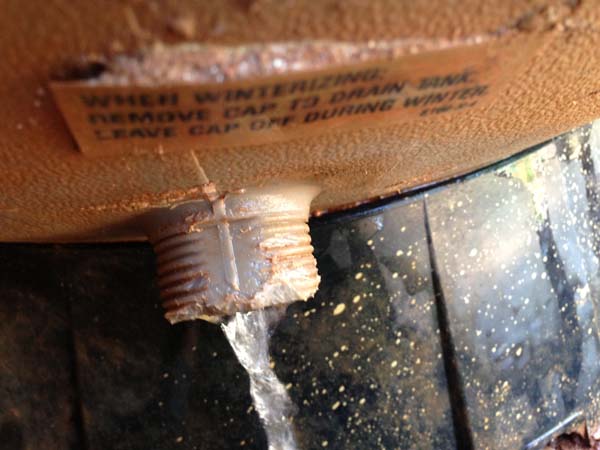 It seems that over the winter, something thirsty came and made a snack of this particular spigot. Om nom nom, tasty plastic. The cap was fine, but because the spout was now all uneven, it wasn’t sealing when screwed on.

Otto suggested I try to buy a washer for the lid, in the hopes that it could sort of seal up the rough edges there, plus I should put some teflon tape on there, too. So off I went to the hardware store, where there was no washer or gasket or anything the size I needed, so I actually buy a small sheet of rubber to MAKE MY OWN GASKET because I could totally handle this and fix it my own damn self. After everything we’ve been through, the pool is going to WORK, because I SAID SO.

So I cut out a circle and put it in the lid and I carefully applied the tape to the spigot and finally I screwed the lid onto the spout and yeah, that didn’t work at all. What I didn’t know at the time was that the chewing was actually worse on the underside, and the threads are all stripped beyond repair. Because OF COURSE THEY ARE. At that point I didn’t know what else to do, so I threw the hose in the pool to at least refill it to the proper level in preparation for someone else smarter than me fixing it.

Otto came home last night and confirmed that yes, it’s completely borked. The difference between him and me, though, is that I would like to burn this house down and start over again (SOMEPLACE WITHOUT A POOL, thanks), but he thinks he can essentially built a larger spout around the one that’s now unsealable, so he’s going to work on that later today. He was under the porch tinkering with the spout and the lid and I was standing there being useless, so I started kind of wandering around, checking my plants, and then I happened to look at the pool, and I did that thing you see in movies where everything kind of slows down and you blink a LOT because what you’re seeing doesn’t make any sense, and you think maybe you are imagining it.

Blink. Blink blink blink. It was dark out, by then, and we had the lights on out back and a couple of flashlights, so maybe it was a trick of the light (or lack thereof). Blink blink.

Nope, not an illusion. The water level in the pool was down again.

We have not been running the filter, because of the aforementioned borked spigot. The water has just been sitting there.

Which means there’s a hole in the brand new liner… somewhere.

I think Otto is coming around to my idea of burning everything down and starting over.