As I noted last month, Licorice enjoys her time out on safari now that the fence is complete and she can roam around in relative freedom, inside a contained area. It had gotten to where she spent only a napping hour or so indoors with me, during the day, and spent the remainder of her daylight hours either 1) outside doing lord knows what, 2) hurling herself at my office door as a subtle hint that she wished to head out, or 3) standing next to my chair whining until I opened the damn door.

I’ll admit, I was a little saddened that just laying on the floor of my office was no longer sufficient for her. My office is a messy pit, but a dog on the floor totally spruces the place up. Nevertheless, I was pleased that she was enjoying herself so much outside, and it did kind of make the whole fence debacle ALMOST feel worth it.

But then—because I’m essentially a big jerk—I had to go and ruin the dog’s good time.

Three years ago, upon discovering that our deck was sinking into the ground, we paid to have our contractor bring in a crew, jack the whole thing up (by which I mean “raise it up with a massive jack” not “screw it up beyond repair”), and put concrete footings under the supports. He’d warned us that it was a temporary fix, but we stuck our fingers in our ears and shouted “LA LA LA LA LA LA I CAN’T HEAR YOU!” and hoped for the best. Well. We got three more years out of it, but this summer as the railing on the main stairs broke free and twisted away from the posts and large chunks of the floor boards started flaking off and—my favorite!!—large cracks began appearing in the support posts of the once-beloved gazebo, it was time to admit that the original deck’s life was coming to a less-than-graceful end.

So just like that, we gave the dog an outdoor wonderland, and then we cruelly yanked it away.

The deck demolition didn’t take much time at all, but as these things so often go, the crew shows up and does an impressive amount of work (say, knocking down the entire deck) and then disappears for a day or two or five. The dog spent two solid days hurling herself at my office door before I got the bright idea to OPEN THE DAMN DOOR and let her see why I wasn’t letting her out. The door swung open and I held onto her collar—I was afraid she’d dash out before realizing she was, in fact, six feet above ground—and she looked outside, strained against my hold, and then turned her head to look at me.

I swear if she could talk, that look definitely would’ve come with a, “What the HELL? You BITCH!”

Licorice spent several days mopey and depressed between when the deck disappeared and when the crew showed up again. But yesterday they got a ton done, so I took her out this morning to try to show her that things are progressing and eventually she’ll have her jungle back.

The door to my office still opens up onto nothing (well, okay, it opens to a frame that is still board-less), but the door in the dining room can actually be exited normally, now. So I opened it up and snapped a picture just before the dog ran out. 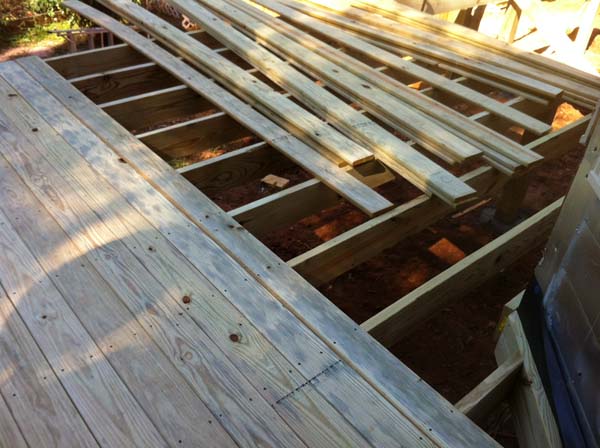 Looks pretty nice, right? Wait; let me set that up better. Imagine, if you will, a twisted, cracking, painted-baby-poop-brown-with-latex-paint (honestly, I have no idea what the former homeowners here were thinking) deck that’s uneven and falling apart, first. Once you’ve got that image in your mind, look at the above picture. LOOKS PRETTY NICE, RIGHT??

The dog—upon seeing that there was actual! deck! out there, ran right out. 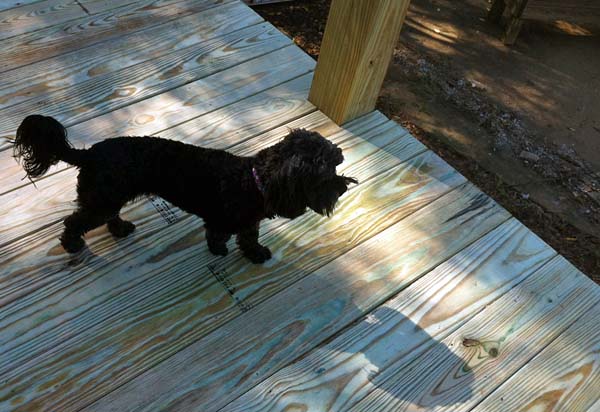 She was extremely perplexed, though. While you could tell she was glad to be out there, the lack of railings and STAIRS (stairs = access to the jungle below, where she stalks her snacks) was confusing.

She peeked back at me, then went and stood at one corner. 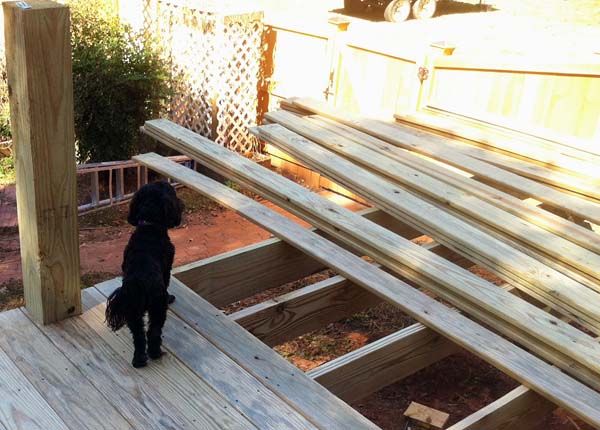 (She’s totally staring at the box where I grew green beans this summer, which she often used to steal when the vines hung low enough. Poor puppy, trapped and green-bean-less.)

Realizing that she couldn’t possibly get down from there, she looked back at me again, and then she heard a noise off the far end of the deck. SQUIRREL!! 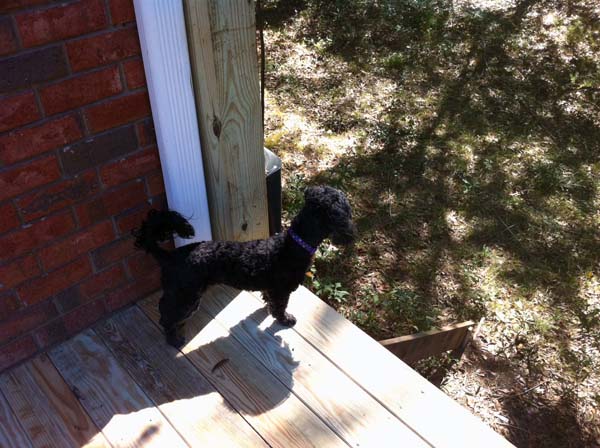 She watched it so intently, and for so long, I began to fear she might actually try to jump off the deck. So I headed back to the door and called her.

She turned and glared at me. (Some days, owning this dog is kind of like having an extra teenager in the house.)

Eventually I was able to coax her back inside—leaving her out there with no railings seemed like a bad idea—and she stalked into my office and dove under the futon for a nap. My reassurances that they’ll be done… soon… (GOD I HOPE) were met with stony silence.

Am I going to bribe my way back into her good graces by having the contractor install a doggie door in the new screened porch area one they get to that? Why yes. Yes, I am.

Also, I would just like it noted for the record that THIS project has actually been remarkably drama-free, if you don’t count the dog being in a snit. I wish they’d stop leaving us to go work on other jobs (obviously), but things are moving right along. Of course the dog just HAD to make it all about her. (I think she’s been spending too much time with Chickadee.)