So this was Christmas

Christmas was bittersweet, but surprisingly lovely.

I’ve never not been with my kids on Christmas, before. I’ve been divorced for… HOLY CRAP, I’ve been divorced for coming up on eight years. Thus far we’ve managed to divide up the holidays in such a way that we alternate some of the other ones, but Christmas has always been shared. Christmas Eve and morning at one house, Christmas Day at the other. I’m really glad we’ve been able to make that work for as long as we have. But this year—with the canceled plans, rescheduling of getting the kids up north, and general mayhem—it just couldn’t be done. My ex asked if he could get the kids on Christmas Eve day and I said sure, because so much had already been disrupted and ruined and it somehow seemed like the least I could do.

So we did our family Christmas early and I put on a brave face and sent them off on the 24th, and the entire day I just felt awful, inside and out. By evening I had a slight fever and I thought HERE WE GO, NOW I GET THE FLU. But when we woke up Christmas Day I was fine.

The kids Skyped me about thirty seconds after I sat down at the computer, and they bounced around and showed me the cool stuff they got at their dad’s house and asked if Santa had come here. I tried to look mysterious and assured them that it was clear we’d had a visitor—the stockings were bulging and goodness, I don’t want to ruin the surprise, but JUST WAIT UNTIL YOU SEE WHAT HE LEFT—and I oohed and aahed over everything they waved at the camera and they were clearly happy.

So when I said goodbye, I was only a little bit surprised to discover that I was, too. Would I rather BE with them? Absolutely. But if they’re happy, that’s all that matters. Besides, this would leave me free to finish my Big Annoying Project.

I was totally looking forward to a day of lolling around, on Christmas. Relaxation and decompression has been hard to come by ’round here, of late, so I was thinking: the couch, the Roku… it could be a banner slug day, y’know? But my MEAN HUSBAND told me he was not watching any Dexter episodes with me on Christmas. Like serial killers and a holy day don’t go together, or something. Pffft. So instead we watched Scrooged and A Christmas Story, and that was fine. But my time on the couch actually had a PURPOSE, this year, because I am a poor planner and December kind of blew up on me.

Okay, so: Every year Santa fills the stockings, right? Right. And every year everyone gets a new Christmas ornament. Santa is a sentimental fool, you know, so every year’s ornaments are not only suited to each recipient, but generally reflect something of the past year that was memorable. Like, the first Christmas in Georgia, the kids got UGA bulldog ornaments. Two years ago, we got a Wii, and everyone got little wiimote ornaments. And last year—our first big year of camping—we all got s’mores ornaments.

A few months ago, I Santa started trying to think about what would make the perfect theme for this year’s ornaments, and the answer was obvious: something to commemorate the family cruise we went on this summer. That’s a once-in-a-lifetime experience if ever there was one, right? (I mean, unless you want to take us all on another cruise for your 71st birthday, Dad? Dad?) So all I had to do was find Carnival Cruise ornaments. Maybe ones featuring the ship we were on.

Hooray for planning ahead! Except… I didn’t plan quite far enough ahead. Guess where you can buy Carnival ornaments? ON THE SHIP. Guess where else? NOWHERE ELSE! I couldn’t even find them on eBay. So… hmph. Totally foiled.

Except. When I thought about it, I realized the thing that kids loved the most about the cruise wasn’t the ship, but the towel animals that appeared in our room every night. And so somehow I got it into my head that I could make towel animal ornaments.

Even though I don’t have a crafty bone in my body. Even though I can barely sew a button back on without hurting myself. I can’t explain; sometimes I just get an idea and it seems PERFECTLY LOGICAL when it really, really is not.

I bought some baby washcloths. I looked up some “how to” videos. And I vowed to make the damn ornaments.

But then life kind of blew up, and I alternated between being very busy and very comatose, trying to recover from everything that was going on, and then everyone was sick, and then it became clear that the kids weren’t going to be here for Christmas morning, anyway, and it just never got done. And while it’s true that I have an entire week, yesterday as I sat watching Christmas movies and having a glass of wine and some cheese and (gluten-free) crackers with my husband, it suddenly seemed imperative that I MAKE THE ORNAMENTS so that it would be done and I could stop worrying about it.

First up: An elephant for Chickadee. She has a thing for elephants. 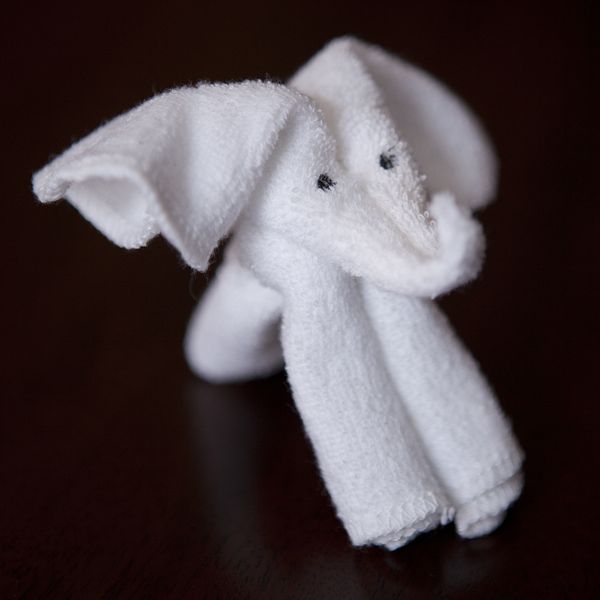 That one wasn’t too difficult, and ended up looking pretty much like what we’d been given on the ship. So far, so good!

Next up: A dog. Maybe for Monkey, because he does love dogs. 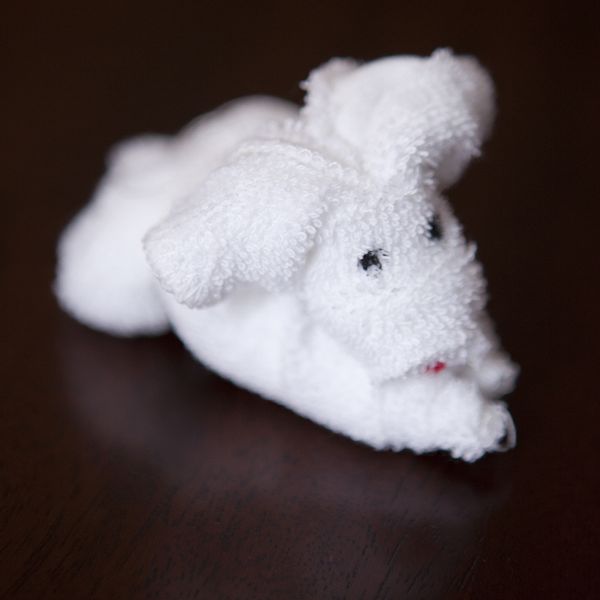 I was not as pleased with this one. It was… okay. Not great. I redid the head several times before giving up. It looked a little bit like a pig. Even after I added a little red for a tongue.

No matter! I would just make Monkey a MONKEY (obviously). 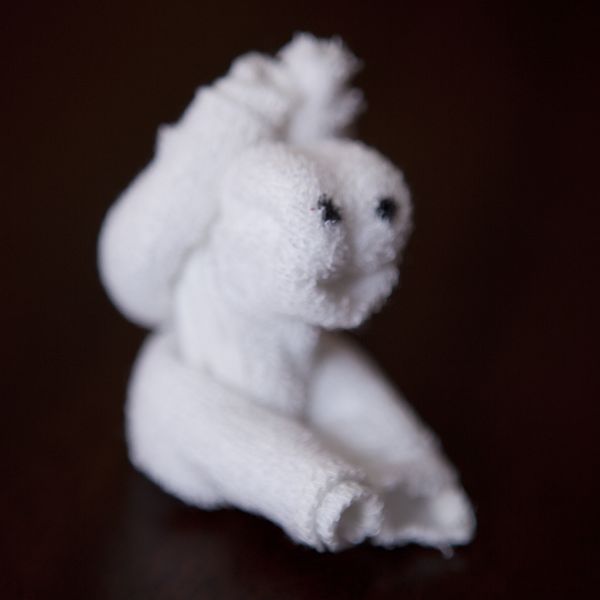 Hrm. Well, the body on this one came out great. (It’s hard to tell from the picture, but whenever you get a monkey on the ship, it’s left hanging from something, and when this is held up the way it’ll hang from the tree, it looks just right. On the other hand, its head looks a little bit like a frog. Or like the monkey is about to suck your face off. Oh well. Probably it needed a smaller head, but despite having smaller “towels” for this project, my fingers remain the same size, which makes manipulating these tiny things kind of hard.

And finally, I had to pick something for Otto. What to make for my Boston boy? A LOBSTAH, of course! 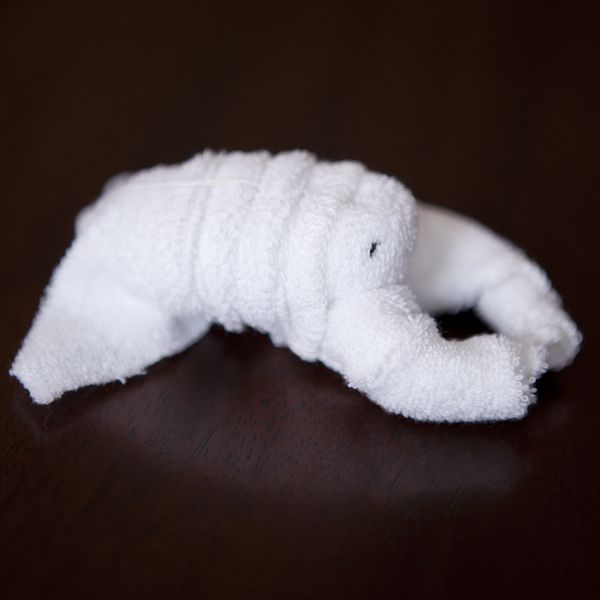 I may have… sworn a lot during this one. At first I thought a lobster would be too hard, so I figured he could settle for a crab, which looked easier to make. My crab looked like… a tiny pile of towels. So I made the lobster. It only took about fifty billion tries. And then Otto said, “What’s that one? A crab?” and I hit him over the head with the cheese plate.

All in all, I think it’ll do. Hopefully the kids won’t notice that Santa’s elves aren’t the greatest crafters in the world. 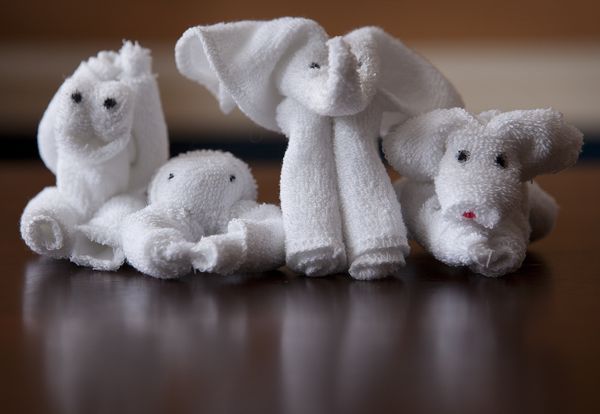 [Edited to add: I just realized it’s hard to figure scale from these pics that Otto took. Here’s the elephant in progress, to give you an idea.]

[Bonus Licorice funny: Licorice spent most of the day lying next to me while I worked. Once all the ornaments were done, I was feeling very celebratory indeed, so I moved down to the other end of the couch where Otto was to, um, share my joy. Ahem. (Okay, fine; there may have been some smooching involved.) And after a minute or so I happened to turn my head and there was Licorice, sitting three inches away, head cocked in curiosity, STARING AT US.

Kind of a mood-breaker. And also a sign that there has not been nearly enough of the, er, joy-sharing ’round here lately. (My husband just passed out from embarrassment. It’s okay, honey! Wake up! I MADE YOU A LOBSTER!)]