I know I said yesterday that this cruise would be a lot more fun without the kids—and that’s true in many ways—but the other truth is that it’s not that it would be more FUN so much as it would be less COMPLEX.

Having kids makes it more complicated. (Having a kid with some special needs makes it a lot more complicated, quite frankly, but whatever.) Kids are complicated, period. My own special snowflakes are both easier and harder than other kids, in various ways, and I’m not up for a rousing game of “whose kids are the very most baffling” right at the moment.

The other truth is that if the kids weren’t here, this trip would not contain some of my very favorite moments so far. It would be a different trip, and while I may wish we were experiencing some of the perks of traveling kidless, now and then, this trip has quite a lot to recommend it exactly as it is.

Example the first: Watching the kids be completely smitten with their little cousins is delightful. Sure, I might get a bit more attention from them, myself, if the kids weren’t here (Banana barely deigns to speak to me, and Chickadee is always snatching Gerber away), but that’s okay.

Example the second: Did you know that Carnival leaves you a towel animal and a chocolate mint for each guest every night when they come to do turn-down service? (Do not get me started on confusion caused by the towel animal. What exactly are we supposed to DO with it? Dismantle and destroy it so that we have extra washcloths? Build a shrine to it? Give it a bowl of kibble?) The kids RACE back to the room after dinner to find out what kind of towel animal we have that evening. (So far we’ve had a dog/rabbit, an elephant, and last night’s animal is either a dinosaur or a waterfowl that was caught in a nuclear accident. I think.) And we have a “special drawer” where we put the chocolates—because we never eat them right away—and then when the kids are good I open the drawer and pelt them with their treats when they’re not looking. I never would’ve predicted this ritual, but it seems to be working for us.

Example the third: Our window is about eighteen inches further out than the wall it’s set into, and the frame around it forms something of a window seat if you happen to be small and bendy. The children have dubbed this the “hidey hole” and take turns climbing into it with a book, pulling the sheer curtains across the entrance, and announcing that they’ve fallen down the hidey hole and are now gone. It has yet to stop being funny. After the first couple of days, Chickadee started discussing improvements—like, “Maybe we could install a drink dispenser in the hidey hole! Maybe filled with apple juice! Then it would be PERFECT!”

Example the fourth: One night Chickadee was telling us about either a movie or a book where some kids were playing “ding-dong-ditch.” (When you ring doorbells and then run away before people answer.) A little while later, Monkey asked her to please tell him again about “those doorbell ditchers.” This somehow led to an elaborate follow-on about kids who steal doorbells and then have to get rid of them, fast! Where can we get rid of these stupid doorbells, does anyone have any ideas?? Now all any of us has to say to anyone else in the family is “doorbell ditchers!” and it’s instant hilarity.

Example the fifth: Yesterday we sent Chickadee off on a shore excursion with the rest of the family, to help with the little kids, and Otto and I stayed behind with Monkey to just kind of chill out and help him just relax and recharge, and we ended up just wandering around on shore some and then heading back to the ship and going to the pool. Almost everyone was off ship, so we had the pool practically to ourselves, and Monkey couldn’t’ve been more delighted. We played Marco Polo. We tested out the hot tub. (“I think I’m getting blown away by this jet here that’s sending bubbles up my suit!”) We drank lemonade and lounged around and Monkey thanked us for giving him a nice calm afternoon, and then later everyone else came back and my dad couldn’t stop talking about how awesome Chickadee had been while they were gone.

Yeah, later we let the kids stay up late for the big magic show, and our seats were terrible and Monkey was in tears before it started and Chickadee was in tears by the time it ended (hooray for overtired children!), but I’m telling you, that’s not what we’ll remember.

I’ll remember random tacklings in the hallway on the way to breakfast, and being kind of glad that Otto always, always has a camera. 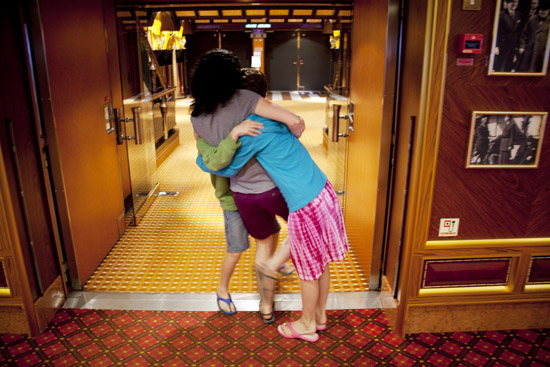 Happy Love Thursday, everyone. Today I’m off to make some more memories, with the people I love best.