Will swap sourdough for bubble wrap

So much has happened since I was last here!

Hahahahaaaaaaaa. Just a little bit of shelter-in-place humor for you. I’M HILARIOUS.

Actually, a few things have happened. First of all, our moron governor decided that certain businesses could open back up again. This is measured and sensible, yes? Of course! But then you find out that these essential businesses of which he speaks are… salons, nail places, and bowling alleys. And even if you don’t live in Georgia, you’ve heard about this, because we’re now The State That Spawned a Hundred Memes, starting with a few dozen riffs on how it’s time to go get your nails did and hit the bowling alley. Needless to say, we are still sheltering in place, because 1) I couldn’t tell you the last time we went bowling, 2) everyone here who wants a haircut can get one from me, 3) no one here goes to nail salons, and 4) evidently the governor is trying to strategically kill off low-wage workers (or at least get them off the unemployment roll) but we’d prefer not to get sick, thanks.

Nope, we’re still at home, still doing a once-every-two-weeks coordinated grocery shop which involves wiping everything down with bleach before it gets put away, still bored out of our minds, still glad to be safe and healthy and fed but wondering if it will ever be safe to venture out again.

In the meantime, I have continued sewing masks, I have branched out into new fabrics and supplies (I just got some metal nosepieces! EXCITING!), and even borrowed a better sewing machine from a friend. One day with that machine and I realized Chickadee’s sewing machine (which I bought her many, many moons ago as a “decent beginner” machine) is garbage, and I promptly purchased the loaner because I luuuuuuurve it and didn’t want to give it back. Also I don’t know who I am anymore, because I am a person who loves a sewing machine. I also discovered sewing CLIPS which are like tiny little plastic-and-metal clothespins you can use instead of straight pins, and they have CHANGED MY LIFE (by which I mean I am now able to produce pleated masks both much faster and without making myself bleed). Again, “sewing clips changed my life” and I am a stranger to myself. That’s… weird.

I have made three bulk donations to our local women’s domestic violence prevention/shelter program, three bulk donations to local home health agencies, one bulk order for some local teachers who will be headed back to their classrooms for a bit (sans students, but still), and however many masks that got sent out to friends and family and readers all over the place. A friend tried to compliment me on this earlier today and I corrected her, as this is less “amazing” and more “how I am staying sane” and therefore not worthy of accolades. The fact that it’s helping others is simply a bonus. Also before this I had no idea how to sew and now I love a sewing machine so who says you can’t find new romance in the time of Corona?

Another COVID-19 development: I know half the world has started making sourdough bread because yeast is hard to find, but I smugly skipped this trend because half our household is gluten-free and I’m not going to make a ton of sourdough bread half of us can’t eat. BUT THEN. A local friend make a gluten-free starter. So yeah, I’ve been sucked in. (I didn’t know you could do it gluten-free, but apparently you can.) Down the wormhole I went, and now I buy things like millet and sorghum flours—wait, that’s wrong, actually I couldn’t find sorghum FLOUR so I just bought sorghum and GROUND IT MYSELF LIKE LAURA GODDAMN INGALLS (if Laura Ingalls had a Blendtec, anyway)—and comb the Internet for interesting recipes that use sourdough discard. While a perfect loaf of gluten-free sourdough still eludes me (it’s a lot harder than if you use wheat flour), I’ve made cookies and coffee cake and other stuff with it, and even my Failure Breadsâ„¢ have been pretty good. So that’s a nice distraction, too.

The world continues to plug along as best it can, and as it happens every May, we had Mother’s Day and our familyversary in rapid succession. For Mother’s Day my children decided to get me… I can’t explain it, really, so here’s a picture: 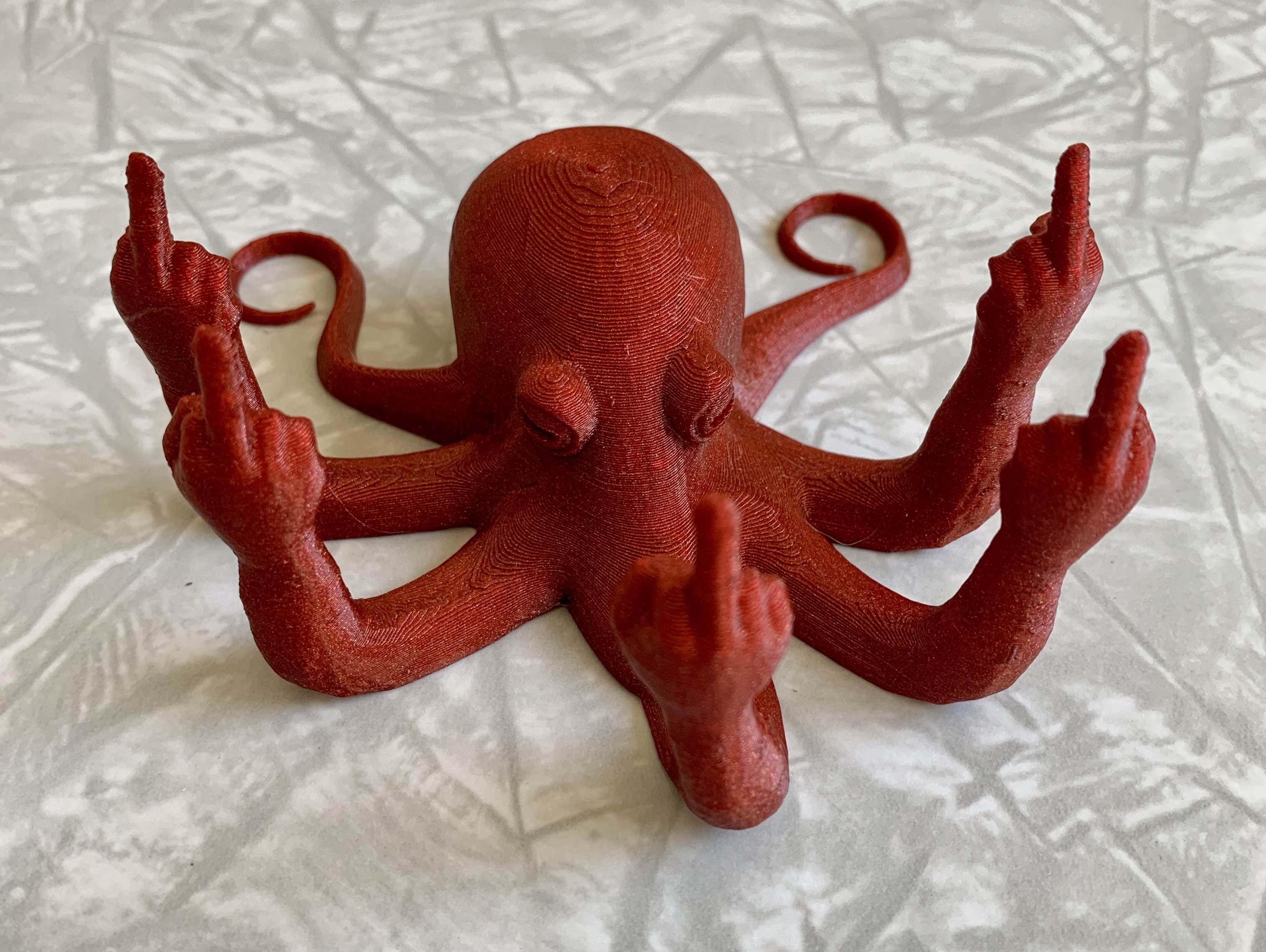 (What, like you would’ve been able to picture it if I told you they got me a 3D-printed octopus flipping off the world with 5 of its eight tentacles?) It fits in the palm of my hand, and I love it, and apparently they knew I would, even before 2020 descended firmly into dumpster-fire territory. I don’t know what this says about me, but I’m okay with it. This fine, feisty fellow now sits on my dresser, saying what all of us are thinking about the current state of the world.

The day after Mother’s Day was our familyversary, because Otto and I have now been married for 13 entire years, and our marriage is now an eye-rolling teenager who probably thinks that octopus is super embarrassing. Nevertheless, Otto pulled his usual super-thoughtful year-appropriate gift-for-the-whole-family thing, and while the traditional 13th anniversary gift is lace, somewhere he found a modern gift related to chrysanthemums, I guess, and the kids and I received seeds and pots and we are going to try VERY HARD not to kill anything, this time. (See also: the year he gave us bonsai trees [they died] and the year we got rose bushes [also dead].) Because I am super romantic, I bought us tickets to Hamilton in Atlanta a while back (after asking Otto if that would be okay with him and something he wanted to see, so no surprise), but of course it was canceled, and I replaced that gift with… ummm, a lot of apologies. Otto is a lucky man!

Later on on our anniversary day I gave Otto ANOTHER gift, but not one either of us had planned for.

So, I think I have mentioned before that we added a dog run to our fenced area out back, and Licorice loves it out there, but Duncan—poor Duncan—not only is not so much a romping dog (haaaaa), anyway, but the sheer distance and number of stairs required to get there (down off the deck) is just not doable for him. As a result we simply take him out through the garage (mostly flat) when he needs to do his business, and that has worked well for years. In recent months, though, Duncan has stopped being able to navigate the single non-flat component to this trek on his way back in; namely, he cannot get up the single step from the garage floor back into the house at the doorway. We lift him up, and it’s no bother, but Otto feels bad for Duncan, because of course he does.

At some point Otto mentioned that he could probably find or build a box at half-step height, and maybe that would allow Duncan a path back inside which wouldn’t require assistance. I said… well, I don’t remember what I said, but probably “okay” or “sure” or “you have way too much time on your hands, dude.” Well, on our anniversary Otto produced said wooden box, and placed it outside the door back into the house from the garage, and Duncan promptly commenced walking around it.

I took Duncan out at some point and moved the box a bit from where Otto had originally placed it, thinking I could force Duncan to use it because there was literally no way around it. He (Duncan, not Otto) gingerly stepped up on it and then inside. Success!

Later that afternoon, nearly in the evening, I was grinding some oats into flour (LAURA GODDAMN INGALLS) and managed to overheat my blender (!!) by overfilling it, and I was aggravated because I thought this was going to be a quick task that had turned into A Whole Thing, but finally I got everything ground and poured back into a labeled Ziploc and ready to put away. I keep large bags of flour in our garage freezer because I am paranoid about bugs, so once it was done I figured I’d just get it put in the freezer and get back to whatever it was I’d been doing beforehand. I grabbed the bag, flew out the garage door…

… and landed wrong on the half-step I’d forgotten was there. The fall took both about a year of slow-motion time and a split second, but I heard something pop and I seemed to have extra arms and legs flying around until I collapsed in a heap of tears on the garage floor.

Like the capable grown-up I am, I did the first thing that occurred to me. “OTTO!” I called. Not “Help” or “I’m hurt” because my brain wasn’t working super well, but I did call for him.

I surveyed the damage. Second thought after calling for Otto: Shit, I think maybe I broke my ankle. AND I AM NOT GOING TO THE ER UNLESS I AM NEAR DEATH, WHICH I AM NOT. I called for Otto again, and instead, Chickadee appeared, because she was downstairs and Otto was not. “Mom? Are you okay?”

“OTTOOOOOOOOOOOOOO!” she bellowed. “MOM NEEDS YOU RIGHT NOW!” She put her hands on my shoulders and patted me. “Can I do anything for you?” she asked. “Otto’s coming. It’s okay.”

I pointed to the bag of oat flour I’d dropped. “Can you put that in the freezer for me?” I asked. She nodded, patted me again, murmured more assurances, and put the flour away. Then Otto appeared and he helped me up and half-carried me to the couch, and we had a rather spirited conversation about whether or not I needed to go to the hospital. We know how to party!!

In the end, I opted for a bag of frozen edamame over the ER. I promised that if it was still bad in the morning, I would call my doctor for an ortho referral, but I felt like I would be okay for the night. Otto was skeptical but I was adamant that I was not going to go catch the plague on our anniversary.

So the gift I ended up giving my long-suffering husband was both a stiff upper lip and not breaking a bone—four days later, I still have a gnarly-looking Frankenankle, but I can bear weight on it and I’m 99% certain it’s just a really bad sprain. Plus now Otto gets to make a lot of jokes about how next year he’s just going to give me one of those inflatable hamster ball things to live in.