All things baffled and borkening

Yesterday the temperature hit the high 50s here, and there was much rejoicing. This has been the longest, hottest summer I can remember, and allllll through September we joked about how fall would be arriving ANY DAY NOW, and yet the next day the heat index would crack three digits, and that sucked, sure, but when it was still happening the first week of October, well, then it’s just ridiculous. But yesterday—glorious, cool, wonderful yesterday—when we got up, it was actually cool outside. I don’t think it went over about 72 all day.

Today it will be over 80, but RIGHTTHISSECOND it’s only 62 degrees—sweater weather!!—and I’m wearing jeans, because fall is here now. Damnit. IT IS. I am clinging to that as comfort.

So much has happened since I was last here! (Not really.) And so many people have given me so much grief for being absent during that time (DAD)! It’s just that it’s so hard to type anything coherent while shouting insults at my dog. Uhhh… I guess I should probably explain that.

Licorice is our guard dog. Don’t you dare so much as jog down the street on her watch, or you will hear about it. Twelve pounds of terror, she is, and should you dare to actually ENTER THE HOUSE she will continue her ferocious yapping while her tail wags and she discovers that Danger Strangers are terrifying, yes, but also have pets, and so she gives you many kisses. Duncan, on the other hand, is deaf, mostly blind, and 95% of the time gives not a single shit about anything other than food or sleep. If he notices that a Danger Stranger has entered the house and his sister is losing her furry little walnut-sized mind, he will, most likely, lift up his head from his current nap spot, look around for a few seconds, and then resume snoring.

In other words: Duncan barks at nothing, because Duncan doesn’t care if Danger Strangers devour his entire family. But… I guess I should say Duncan USED to bark at nothing. And now Duncan… well, he still barks at nothing, but he does it all the time and with many more borkings. He barks in the kitchen and he barks in my office and he wanders out of the family room in the evenings and into the darkened dining room and stares at nothing and barks as if his very life depends on it. BORK! BORK! BORKBORK! BOOOORK! He borks so hard it sends him skittering backward on the wood floor, sometimes, and he borks so long that I verbally abuse him (remember, he’s deaf) in my frustration until Otto gets upset with me. Apparently calling him a stupid asshole only “adds to the extra noise,” or something.

This has been happening for a while—always at night, only, as he continues to sleep most of the day—and it means our evening routine now includes one of us saying, “Oh, I guess it’s time for The Borkening” the first time he wanders off and starts up after dinner. It also means we now have a large number of “go retrieve the dummy dog” stints to a different room, where we scoop up an indignant dog and bring him back to the couch and he looks at us like WE’RE the jerks. And it’s annoying, sure, but it was okay until he started doing it at bedtime.

Duncan used to put himself to bed. I mean, if we didn’t head to the bedroom immediately after his last feeding-and-emptying-and-treat-ing of the evening, he would go ahead in there and curl up in his bed and be snoring before we arrived. As of a few weeks ago, not only does he have to be lured (or outright carried) to the bedroom, he then stands by the closed door and barks at it. BORK! BORK! BORK! BORKBORKBORK! (In case you’re wondering, asking him if Timmy fell down the well has no effect on his mission at these times.) The first few instances, we figured he needed to go outside again, so one of us would open the door, he would run back to the kitchen, we would catch up and stand by the garage door to indicate “outside” and he would pace around and eventually agree sure, outside seems like a good idea, we’d open the garage, head out with him, and about two steps away from the actual outside he would turn back around and dart into the house…

… where he would usually resume barking.

When this began, we said Okay, he’s old, he’s getting confused, he’s… sundowning? Maybe? Evenings are hard, and we can add “go into the kitchen to retrieve the dog fifteen times during a single television show” to our routine, no problem. I even bought a baby gate, thinking that if we could just stop him from wandering off, he wouldn’t get agitated. WELL. The gate makes him about ten times angrier, as it prevents him from getting closer to the Invisible Threat Which Must Be Thoroughly Borkened. But then he started being unable to settle down at night, PLUS waking up even earlier in the morning, and suddenly it was like having a baby again. Except, you know, a really angry baby. With teeth. So.

I finally took him to the vet after Otto did too much Googling and decided Duncan isn’t just old or an asshole, but might also have collapsing trachea syndrome. He does gag/cough a lot (I always assumed that was just because of all the barking, or maybe just a side effect of his adorable flat face and sinuses), and the nighttime barking was continuing well past midnight, some nights, even if we put him in the ZOMGTHEBIGBED with us (which is a treat), so off we went.

As he always does, Duncan passed the neuro exam with flying colors, and despite gagging every single damn time one of us picks him up here at home, when the vet tried to induced gagging at the office, nothing. He also didn’t exhibit any signs of pain.

“So he’s just a jerk?” I asked the vet, who has known us long enough to know I adore Duncan even though he really is the prince of jerks.

“Well, no. I mean, sure, he’s kind of a jerk, but generally when we see a change in behavior like this it’s either some doggy dementia, like you were suspecting, or they’ve got some arthritis or something that’s worse at the end of the day, and he could have the trachea thing even though I couldn’t get him to cough here in the office. It’s hard to know.” Good to know that the vet didn’t have much more insight than Monkey, whose diagnosis has long been, “He just needs to bork sometimes.”

In the end he suggested a course of prednisone, with the vet reasoning that if there’s any sort of inflammation causing him discomfort—and thus, trouble settling down at night—this would at least clue us in. I was skeptical, but agreed, because shooting him with a tranquilizer gun every night wasn’t offered up as a viable solution (much to my disappointment).

[Sidebar: The vet also suggested that given how much Duncan sleeps during the day, we should try to “exercise him more” so he’s more tired at night. After I finished laughing so hard I nearly wet myself, I gestured to my dog—now curled up on the floor of the exam room, ready for another nap—and asked how, exactly, the vet proposed I do that. He took out a treat, Duncan popped right up to get it, and the vet laughed and told me—I AM NOT MAKING THIS UP—maybe I should try just running around the house with the treat jar to get him to move around more. “YOU run around my house with a treat jar,” I told him. “You have to stop eventually, and I enjoy having all my fingers.” For his part, Duncan pawed at the vet and got another treat. But no exercise.]

I brought Duncan home and gave him his first dose of the steroid. That night he went straight to bed. Other couples would’ve taken this rare quiet opportunity for… other things… but Otto and I lay there in the dark discussing whether this meant The Nightly Borkening was truly over.

For close to a week, the typical evening wandering and borkening still happened between dinner and bedtime, but once we locked the doors and turned out the lights, Duncan settled down and went to sleep for the night. But now we’re at the end of the prednisone taper and some nights he sleeps and some nights he BORKBORKBORKs with ever-increasing urgency, alerting us to the danger we cannot see, and I’m back to thinking a tranquilizer gun is a great idea. We’ll have to go back to the vet and see what he says, but I suspect he will not be as enthused with that proposal as I am. Damnit.

In the meantime, Duncan’s days continue to be super stressful, as you can see. 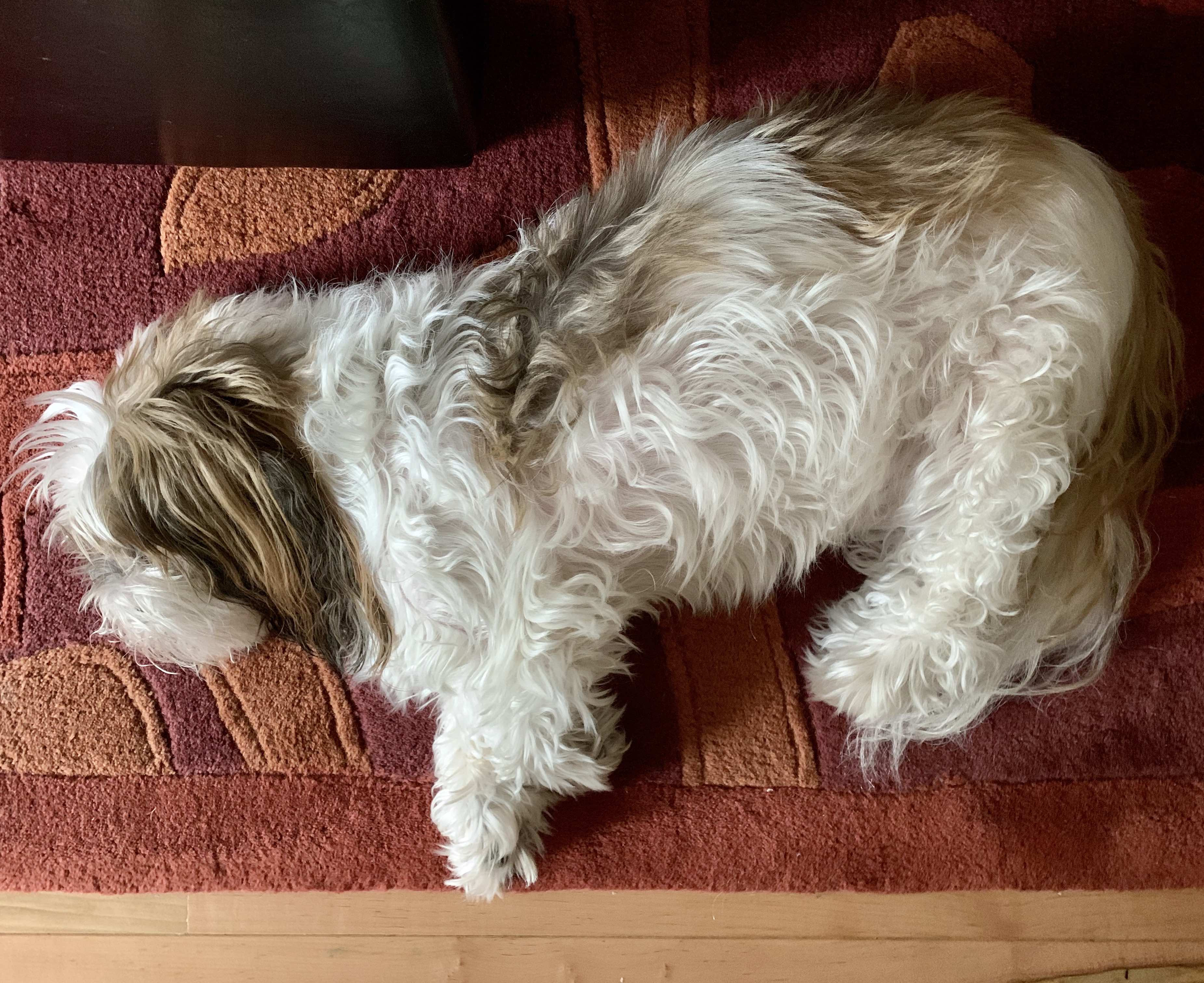 I mean, UPS was just here and Licorice just about had an aneurysm (the nerve of them, bringing me the sixty-seven pounds of rice I ordered from Amazon), and Duncan’s super upset about it. Or not. Jerk.