So it’s been about a month since I wrote here. Honestly, it only felt like a couple of weeks, which is weird, because in our new dystopian reality, every single day feels like a month, lately. Still, I knew I’d been remiss when my father called me to make sure I was still alive. When I go Dad-wondering-if-I-still-exist many days between writing, that’s when I’ve been a jerk. Er, a bigger jerk than normal.

This is the part where I tell you how thrilling my life has been that I just haven’t had a SINGLE MOMENT to come here and detail it for you, what with the EXCITEMENT and DIRE IMPORTANCE of it all. And I would totally do that if I’d been doing anything that fit that criteria, but still I am mostly reading news, listening to news, and waiting for the sky to fall. Turns out that that takes up a crazy amount of time.

And so I present to you a brief summary of the Very Exciting Things Which Happened of the last month or so:

1) Vroom vroom vroom.
Monkey drives! Sort of. Mostly. Under duress, and often while complaining loudly, but! Still! I make him drive me around and the goal of him getting his license just in time to move to the city and never drive seems well underway. If he does well, it’s because he’s figuring it out. If he has an issue, well, it’s probably my fault. (I told him the wrong thing or I was unclear or I am otherwise a big meaniepants.) My car remains in one piece and his driving is just fine, plus I sold a kidney and a nice professional instructor comes to the house and takes him out for a few hours every week.

2) Underwater basket weaving chronicles.
Remember when we used to joke about how you could go to college and take underwater basket weaving? No? Just me? Well, Chickadee’s college does not offer underwater basket weaving, ALAS. However, they do have an intramural innertube water polo league. Which my kid joined, because I don’t even know who she is anymore. (Me: “You know that’s a SPORT, right?” Her: “Yeah, I was surprised, too.”) She is also doing all sort of other collegiate things I never imagined her doing, and from my vantage point over here (being filled in over FaceTime, watching her Snapchat stories and following her Instagram) it is fascinating to behold. This weekend we are headed down to a basketball game because I hear there’s an awesome purple-haired kid in the pep band. Also it’s possible that said kid sent me a list of things she “needs” (wants) which I will supply because Mom Is A Sucker And Misses Her Baybee.

3) It’s a dog’s life.
Licorice and Duncan continue to be ridiculous. I don’t know how I lived my life before dogs, for they are truly the key to keeping perspective on all things. I’m an incredibly anxious person. Years of therapy and medication have gotten me to where it’s manageable, mostly. Know what the best antidote to anxiety is? Watching two small dogs LOSE THEIR MINDS when you sit down with a bowl of popcorn. I’m just saying. Furthermore, time passes and the dogs get overgrown and even MORE ridiculous, and then I get them groomed. When I say to the groomer, “Maybe a little shorter over their eyes, this time?” they come back looking even sillier than usual. I can’t quite put my finger on it, but… 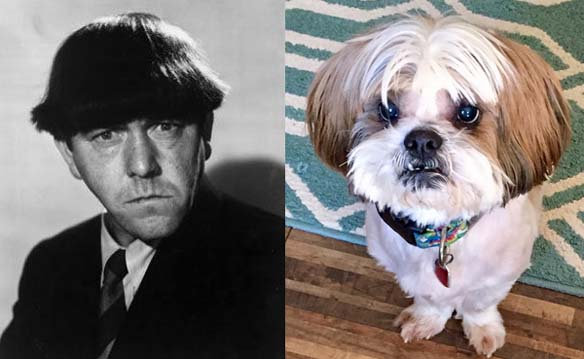 4) There are no small roles, only small actors.
I decided to audition for a play, because I can barely remember my own name and am not working nearly enough and there’s laundry that’s been sitting in a basket for the last three weeks right next to the bed. (Logic is my strong suit.) Anyhoo! I auditioned, and now I have a teeny tiny part in a fun show which possibly mumble mumble actually okay yes definitely requires me to take my clothing off on stage. ART! Also, I have been eating my feelings since the election (mmmmm, delicious feelings) so HOOBOY WOW what a good time to work on that whole loving your body no matter what thing. HA. HAHA. OH GOD. (Brb, doing 100 push-ups and then crying.)

5) Romaaaaaaaance!
The other night, Otto and I were trying to plan a little getaway for just the two of us. We’re coming up on our 10th anniversary, y’know, and save for the whirlwind trip to the mountains right after we got married (during which—I love to remind him—I had a terrible cold and basically slept or coughed the entire time), we have not really managed much in the way of a couple’s getaway. We had juuuust about agreed on a time/plan for spring break when we realized that… I will have play rehearsal all that week. Good job, me! And then as we tried to buoy our mood upon realizing this, Monkey called from upstairs that he needed some help. We went from planning a vacation to all three of us on hands and knees on the carpet trying to locate an eyeglass screw that had gone rogue in a matter of minutes. Our marriage in a nutshell, really. (The screw was never recovered. I found a spare, and the glasses were repaired, and we still aren’t going on vacation, but Otto is still my favorite.)

6) End of an era.
This week we had our last IEP meeting EVER. Ever ever ever. I did not dance on the table, but the temptation was strong. Instead I baked cookies and giggled involuntarily every time someone said, “Next year when he’s in college.” Monkey—superior self-advocate—ate a lot of cookies and corrected his case manager every time he misspelled something on the document (which was projected onto a screen for our scrutiny). I will not miss those meetings. I suspect Monkey will miss the cookies.

7) Food, glorious fooooooood.
I can spend an inordinate amount of time cooking, it turns out. And baking. And EATING. I do enjoy eating. Ahem. Did I mention that my husband got me a sous vide for Christmas? He did. Now my new favorite hobby is putting food in bags and them sous vide-ing them. Because MAGIC! We had a flank steak that was like eating butter. But meat. Meat butter? It was delicious, is my point. Also I am gearing up to do a comparison of some meal delivery services for Alpha Mom, which means we are getting various boxes of stuff and I’m making concoctions I wouldn’t, otherwise, and I enjoy it entirely too much. (See also: “I do enjoy eating.”) Last night we had seared salmon with charred lemons and beet risotto. Fancy! Food is another good way to think a little less about politics.

Speaking of: I answered a question at Alpha Mom about helping kids speak out at school when… current events are not bringing out the best in people (ahem). That might be of interest to some of you.

There you go; you’re all caught up. You wouldn’t think that took an entire month, but somehow, it did. Must’ve been all the eating.