Not dead! But still disappointing!

If you’ve been feeling let down because I haven’t been writing here much this summer, know that you’re in good company—most of my family is annoyed with me as well. First I received a phone call from my father asking me if I was still alive, and if so, if everything was alright, because “when you don’t blog for more than a week I get worried.”

Next, I received a text from my eldest (who was in the next room at the time), because although she will happily walk miles to catch Pokemon, apparently ungluing her ass from the couch to speak to me in person is too much effort.

I guess what I’m saying is: If you’re bothered, get in line. But I’m well aware that I suck. So! A brief(ish) (lies) summary of what’s been happening in my life since we last spoke, and it’s going to be SCINTILLATING, I’m sure.

Monkey Does Dorm Life
Remember I told you about my 1,000 neuroses related to the Monkey finishing up his summer internship by living in a dorm? I’m pleased to report that I am just a neurotic fool, as he ended up rooming with a fellow band nerd from his school and had a fine time. Of course, he arrived home minus one pair of dress pants as well as missing one lucky sock (shhhh, don’t talk about it; I’m sure he doesn’t care about the pants, but the sock thing was distressing), but whatever. I’m calling it a success. And I’m guessing his roommate’s family enjoyed the frantic “Do you by any chance have my pants??” message after, too. We went to the closing ceremony (which was, I think, longer than his sister’s high school graduation ceremony…) and oohed and aahed over his research and pictures of everyone working in their labs and having fun on field trips and then collected what remained of his things and came home. That left him just one week before Band Camp to do things other than work, so I promptly scheduled him for a check-up and he had to get three shots because I am the worst. Also…

… Monkey Does Campus Tours
In a few short week MAH BAYBEE will be starting classes here at our local Giant University where he was just working/living as he embarks on his senior (!!!) year as a dual-enrolled nerdling (who signs up for 8:00 am Calculus? MY KID), and should he wish to continue on at Giant University as a freshman after graduation, well, he’s already been admitted. Which is very nice. He would happily just do that and not bother applying anywhere else, and would probably get a bunch of scholarship money, AND ALSO happily live at home if we allowed him to. (Should he choose to remain local, he will still be living in the dorms. Even if I have to change the locks.) ANYHOO. A while back we had The Talk. You know the one. No, not THAT one—the one where I explain that if he does his due diligence in exploring his educational options and THEN decides that the local university really is the best fit for him, great! But first he has to explore some other schools. So he did some research and decided to also explore his sister’s college (awwww) as well as Giant Nerd University (not the actual school name) in the city. But he reassured me (multiple times) that nothing would top staying here. WELL. We spent a day in Atlanta and the first student we saw when pulling into the visitor lot at GNU was wearing a “You read my shirt. That’s enough social interaction for today” shirt, and well, it turns out we found His People. He’s still not sure that’s definitely where he wants to go, but at least it’s a strong possibility and he’s realizing there are all different kinds of schools. (I’m not saying I have a preference, I’m just saying that GNU has both a Gaming Club and an Autism Club. Also I had the best fish tacos of my life at their student union and lunch is an important meal, y’know. So.)

The Home Hits Keep On Coming
So remember how a tree squashed our trampoline and my KitchenAid tried to commit suicide? The good news is that the mixer has been fixed and the tree guys came to cut up and haul away the fallen branch. The bad news is that the cost for these things is… bracing. The WORSE news is that right after I dared to say out loud “OH HA HA HA AT LEAST THAT’S OVER AND NOTHING ELSE IS WRONG,” our air conditioning stopped working. Because of course it did. I’m actually waiting on those repair guys right now. (Air conditioning is a luxury, no doubt. Here in lovely GA where our heat index in the summer regularly tops out at triple digits and the humidity is around 90%, it is… a luxury I am unwilling to relinquish.)

Adventures In Cleaning
The Big Chickadee Room Cleanout has begun in earnest, and I wrote you a post at Alpha Mom after the first wave, when we’d only just begun plumbing the depths of a decade of Packratitis. This past weekend we cleared out her closet, and I think I may need a Silkwood shower to recover. I mean, it’s getting done. It’s fine. We’ve moved a big chunk of dorm stuff into her closet (dual purpose: it gets it out of MY closet, plus it takes up the room she could potentially fill up with crap again before she leaves). New hangers have been purchased and under threat of bodily harm, only clothing items destined for the dorm are allowed to go on them (and then those hangers go in a separate section of the closet). Does this seem extreme? Trust me, there are tornadoes more organized than my child. Plus, priorities are odd things, man. Like… 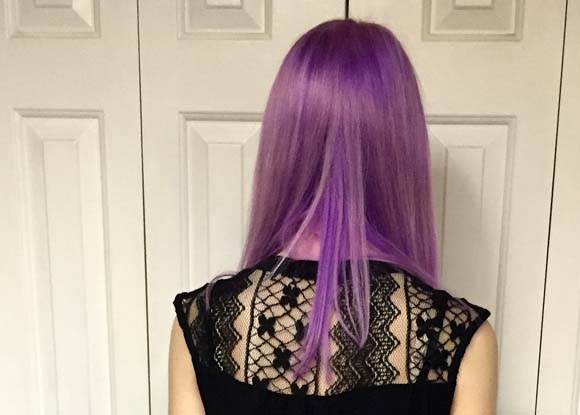 Now, in fairness, her hair looks AMAZING, and I’m all for self-expression and whatnot, plus for the first time in 7ish years of messing around with color in her hair, she went and had the bleaching done at a salon because 1) she has a job and money now and 2) I was not comfortable bleaching her entire head as an amateur stylist. All is great (sooooo many compliments on her hair, wherever she goes, but kids who come to the restaurant where she waits tables seem particularly delighted) BUT remember how she used to have all these skin issues? Years ago? But it’s all under control now? HAHAHAHAAAAAAAAAA*sob*. The stylist did a great job bleaching her hair so that we could color it at home, but within about two hours of leaving the salon she was covered head to toe in welts and rash. (Bleach is irritating and as soon as part of her skin got irritated, her entire body decided to join in.) So now her hair is purple and awesome AND she’s on a course of steroids, and not to sound superior or anything, but I think I know what the song “Flying Purple People Eater” was based on. But she HAD to have her hair done before…

… Orientation!
We came, we saw, we Did All The Things. Chickadee spent the day with her suitemates and got her student ID card (with awesome hair!) and parking pass and mailbox key. We witnessed a ridiculous number of cheesy skits about college life. We ate in the dining hall and measured things in her Actual Dorm Room (!!) and went to the bookstore and bought All The Shirts. There was also a Marketplace thing where you could go around and learn about various clubs, and I’m pretty sure my kid signed up for a dozen things already. [Sidebar: we were trying very hard to avoid the Greek Life section and also the Religion section, but it was VERY hot outside and one of the church groups had free iced coffee. I have some guilt about getting coffee when really they wanted us to get more Jesus, but I feel like Jesus would understand that after a long hot day, anything you do for iced coffee is okay.]

In just over three weeks, she’ll be off. Let’s just… think about that iced coffee, instead. Jesus makes delicious iced coffee.

And finally:
BAND CAMP
It’s the most wonderful time of the year for band nerds, and it’s extra bittersweet for us this season because 1) it’s Monkey’s last year and 2) Chickadee is working at it instead of attending. WHICH IS WEIRD.

So that’s pretty much it. The AC repair guy is here and he just came in and told me we have a coolant leak and then he told me how much it’s going to cost to fix, so I have to go sell a kidney now. Anyone need a kidney? Pretty sure it’s mocha-scented, in case that matters.