“Hey Mir,” you say, because you think it’s funny by now, “is your bathroom renovation done?”

“Ha!” I reply. “HahahaHAHAHAHAAAAAAAAAAAAAAA!” I howl, and eventually you run in the other direction because I am a little deranged at this point, and frankly, scary.

I know I’ve mentioned before that I find Snapchat useful for staying connected to Chickadee, but there was something immensely satisfying about sending her this snap yesterday, childish though it may have been. (Listen, I was told the drywall guy was coming first thing, then when I inquired around 11 as to what was going on, I was told he’d be coming at 2. I worked out and got into the shower at 1 sharp, and of course my doorbell rang at 1:05. The dogs went ballistic and I answered my door in my robe in the middle of the day like some sort of dilettante.)

So, no, BUT THANKS FOR ASKING, the bathroom isn’t done. We’re closer, though. The tiling is complete (the third time was the charm, it turns out, though the fact that they had to undo/redo some of the tile twice is something I want you to bear in mind if I am murdered any time soon), so we have a floor and a shower and a toilet, and today the painters are coming, which THEORETICALLY means that tomorrow we can actually start using the bathroom again, provided that no one is too bothered by the fact that we don’t yet have a sink. (The vanity was backordered, apparently. Hilarious, because we literally ordered the cheapest possible option and standard everything. Either the whole world is as cheap as we are, or something else is going on. Best not to ponder.)

Bearing in mind that my role in this renovation is limited to shopping—perhaps my favorite sport—and very little actual physical labor, it may be surprising to learn that I am sustaining reno-related injuries, but I’ve always been an over-achiever.

It began earlier this week when the head contractor came to look at some accent tile at my request—demanding homeowner than I am, I felt that it should be, I don’t know, STRAIGHT AND NOT ALL CATTYWAMPUS—and asked if there were still extra pieces of those tiles anywhere. I was pretty sure I’d seen a box in the adjacent room, so I went to look. There was a box! And just a couple of floor tile pieces sitting on top of it. So I picked up those tiles to access the box, as one does.

FUN FACT: When you cut ceramic tile, say, to make it fit into a particular space, it renders the edges VERY VERY SHARP. This makes sense. But if you are focused on your fucked-up tile work and how long your stupid bathroom renovation is taking, it might not occur to you in the moment.

So! I picked up the tile pieces, and one of them sliced about halfway through my pinky. “Ouch,” I said—because I’m a writer and eloquent like that—as I put the tiles back down and grabbed some paper towels to wrap around my finger.

“Oh, that’ll bleed a lot,” said the contractor, a little more cheerfully than it seemed to me was necessary. “They’re like paper cuts! Hurt and bleed and bleed.” (His sympathy was touching.)

Said cut proceeded to bleed through the paper towels, then a washcloth, then the hemostatic gauze and two layers of bandages I applied. Right around the time I was wondering if I might need a stitch (several hours later), it finally stopped oozing. I am hoping for a small scar, just so that I can tell people that yes, that’s from the Great Bathroom Debacle of 2016.

While perhaps not as DIRECTLY related to the renovation, I choose to blame this on the bathroom as well: I am so distracted and frustrated all the time, I was cutting up vegetables yesterday evening while preparing dinner, and while attempting to cube up a giant sweet potato, I somehow ended up with my ring finger underneath my knife. I KNOW, I KNOW, obviously I was not using proper technique for that to happen (honestly, I have no idea HOW it happened, but I wasn’t paying attention, that much is clear). I sort of, um, screamed a little, which was alarming both to my nearby child and the dogs, and then I got to go through the whole stop-the-bleeding bonanza again, and now on my left hand I have bad cuts on two fingers next to each other, and my family wants to know if I am just working my way towards my thumb, HAR HAR, SO FUNNY.

In short: renovation is dangerous stuff. Take it from me, the walking wounded.

Now that I have grossed you out with my stupid injuries, allow me to offer a palate cleanser: I don’t know if you remember that I eagerly purchased a special double-lead leash shortly before Duncan became part of our family, but I did, and it was rather disappointing to discover that Duncan doesn’t go for walks. Duncan goes for carries. My handful of attempts with that leash always ended with Duncan planting himself firmly in the middle of the road about half a block from home, then me carrying him while Licorice danced around wondering why our walk was being cut short. In Duncan’s defense, he is 1) mostly blind, 2) arthritic, and also 3) kind of a dick, but whatever. For a couple of years now, I’ve just taken Licorice for walks and left Duncan at home, because the alternative is carrying him, which is ridiculous. AND WE DON’T WANT TO BE RIDICULOUS.

See, the other day we were at Costco, and they had a really good deal on this collapsible wagon, and I said to Otto, “WE SHOULD TOTALLY GET THAT TO TAKE DUNCAN FOR WALKS,” and Otto rolled his eyes at me and said that was silly, and I don’t know what happened. My inner petulant child kicked in. I launched my campaign: NOT RIDICULOUS, because he would love it. He likes being out, he just can’t walk very far. Also it’s lightweight and collapsible and multi-purpose! We can use it for all SORTS of things! And look, I just looked it up on Amazon and it’s SO MUCH CHEAPER here. WE NEED ONE.

Otto relented, probably against his better judgment. Then he immediately went out of town, probably because he was so embarrassed. (Or, you know, for work. Details.)

Chickadee and I promptly took the dogs out for a walk—Licorice on her leash, per usual, and Duncan in the wagon (properly secured with a seatbelt tether, in case you worry about these things). HE LOVED IT. He sat there like the King of England, sniffing the air, happy as could be. At one point he got antsy, so we took him out and he did his business in an exciting new location, then reboarded and rode back home. It was a complete success.

Except… at one point we came upon a cluster of cyclers who’d stopped to chat, and they started making fun of him. I found myself defensively pointing out that he is OLD and BLIND and ARTHRITIC, and then they backpedaled (haha BACKPEDALED, I’m hilarious!) and we continued on home. Chickie was quite miffed on Duncan’s behalf, and about an hour later, she presented me with a custom license plate she’d created for the wagon. She’s brilliant and it looks exactly like a real Georgia plate, which brings me joy. We laminated and mounted it, and Duncan is now the talk of the neighborhood (okay, maybe some of that talk is “THOSE PEOPLE ARE NUTS,” but in general folks are very sweet about it) as we take him out for regular “pulls.” (Pardon the blurry action shot.) 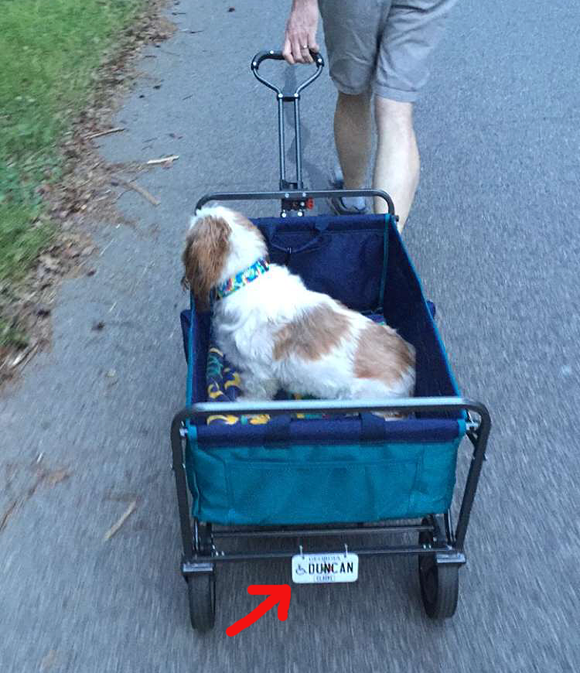 Yes, my dog has his own handicapped vanity plate.

Licorice gets her walk, Duncan gets an adventure, and as long as I’m walking around the neighborhood, I’m not slicing my fingers open. Everyone wins!