Listen, I am a person who aspires to balance. I’m not saying I’m a person who ever ACHIEVES balance, mind you, but I do aspire to it. So when I make a completely over-the-top dessert like I did last week, I try to go for something a little simpler and less-sugar-shock-inducing for the following week.

I had an ulterior motive, too. Lemon bars are Otto’s favorite, and I realized while looking for a recipe that I’ve never actually made them before. (I am a terrible wife.) Whenever we eat out somewhere that has lemon bars on the menu, he gets one. Anyway. Often we send dessert off and an empty pan returns, so I planned from the start to make two pansful, on account of Otto ran a Big Event for work last week and I basically didn’t see him after Wednesday morning until Sunday night. He’d worked hard. He deserved a traditional, perfect lemon bar.

Unfortunately, he’s married to me, so what he got are THESE lemon bars. And they were good, the family tells me, but they were not entirely traditional. Still, no one complained. 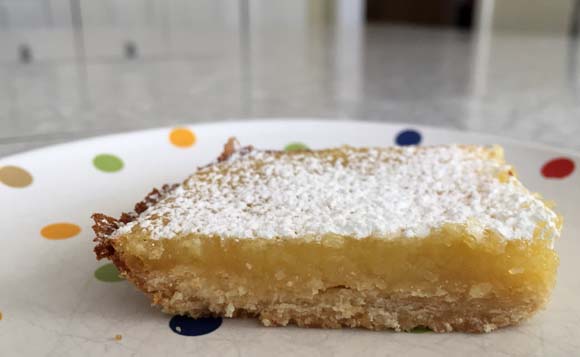 There’s all sorts of things people will argue about when it comes to the perfect lemon bar, I have discovered. Some harp on the ratio of gooey lemon-ness to crust, some want to talk about whether the crust should be crispy or chewy… people have a lot of opinions about lemon bars, is my point. In preparation for baking, I’d purchased an ENORMOUS bag of lemons, and I knew from years of watching Otto sample a wide variety of lemon bars that his criteria were simple: It cannot be soggy, and it must taste VERY lemony.

With this in mind, I combed through recipes and eventually settled on this one from Inspired Taste, for a few reasons. First of all, it uses melted butter in the crust (which automatically makes it easier than a recipe either calling for softened butter or—my nemesis—cutting cold butter into a flour mixture). Second, it claimed the crust is crisp and buttery, which sounded perfect. (I would say the crust I ended up with is quite cookie-like, which is perfect.) And third, it uses a higher volume of lemon juice than the other recipes I looked at, AND it calls for lemon zest in both the crust and the topping. PERFECT.

So I’m here to tell you that that recipe is likely perfection. You want lemon bars? Use Inspired Taste’s recipe.

I’m also here to tell you that my pitiful bag of lemons LET ME DOWN, man. Several of them were rotten. Many others produced a ridiculously small amount of juice, even after being microwaved and rolled and otherwise coaxed to give up the goods. The recipe calls for 3/4 cup of fresh lemon juice for one pan; I was making two, so I needed a cup and a half total. But when I finished squeezing every last acceptable lemon, I had… one cup.

Here’s where the lemon bars got confused. I made up the last half cup with a navel orange and half of a Ruby Red grapefruit. And then I tasted the juice several times to make sure it still mostly tasted lemony. It did, albeit with a bit less bite. To compensate, I added extra zest to the topping (the recipe calls for 2 teaspoons, and I added a full tablespoon).

In fact, I zested that entire bag of lemons because… I am bad at math and wanted to make sure I had enough. 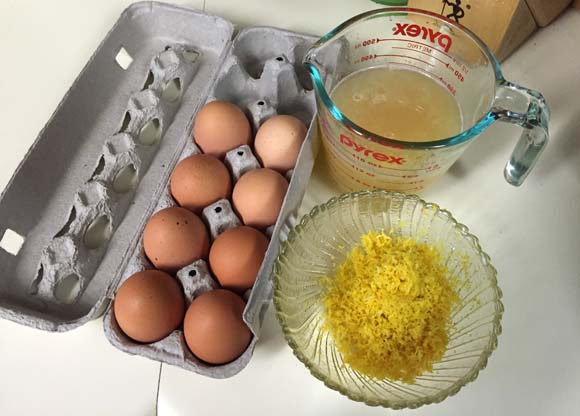 (I ended up freezing a little container of zest, so it’s all good. I think I see a lemon-something scone in the children’s future.)

[In fairness, Otto takes one of those ZOMG DO NOT EAT GRAPEFRUIT WHILE TAKING THIS MEDICATION medications, and his concern pleases me in that it means no matter how weird or difficult things get here, he’s obviously not planning on the easy way out. On the other hand, I squeezed the juice of half a grapefruit into TWO entire pans of lemon bars, so by any measure that is a terrible plan for murder even if that was my goal.]

So! There were lemon bars. The kids’ pan came back empty. I will definitely make this one again, but I will hopefully get more cooperative lemons, next time.