Bananas are a very tricky thing ’round here. They have to be ripe—but not TOO RIPE—and they cannot have any signs of bruising (because that’s not a thing that ever happens to bananas… oh, wait…) because that is Completely Unacceptable. This is where people who are new here assume that I have toddlers because HAHA no one over the age of 4 would be this picky about fruit, right? Yeah. No. (For the record, it is really only one child who is super-picky about the state of bananas, but then the OTHER child insists things like, “I don’t like watermelon” and WHO DOESN’T LIKE WATERMELON, THAT’S CRAZY so let’s call it a draw when assessing Which Teen Is More Insane When It Comes To Fruit, I guess.)

I don’t pack bananas in lunches all that often, on account of the whole It Must Be Banana Perfection thing, but every now and then the planets align and a perfect banana emerges. I will lovingly scoop it up, adorn it with a quick note a la The Bloggess (I did it once and then there was complaining if it didn’t happen every time), and place it INSIDE a large plastic container also housing a sandwich, so that the aforementioned pristine banana-ness may be maintained despite whatever trials and travails a lunch bag might encounter throughout the morning. Both children are aware that this constitutes an implicit Banana Contract wherein YOU HAVE BEEN GIVEN THE BLESSED BANANA AND NOW YOU WILL EAT IT.

You can skip eating the crackers. You can leave the juice pouch. Heck, don’t even finish your sandwich. I don’t care! But eat the damn banana. Because perfection is fleeting.

Well. As I’m sure you can guess, life is also rife with disappointments… like your children ignoring that perfect banana. Or like said banana having been in a container with a sunbutter-and-honey sandwich, so the banana is not just ignored, but sticky with honey. STICKY. And with the sandwich removed from the container for consumption, that banana got banged around the rest of the day and came home both sticky and battered. 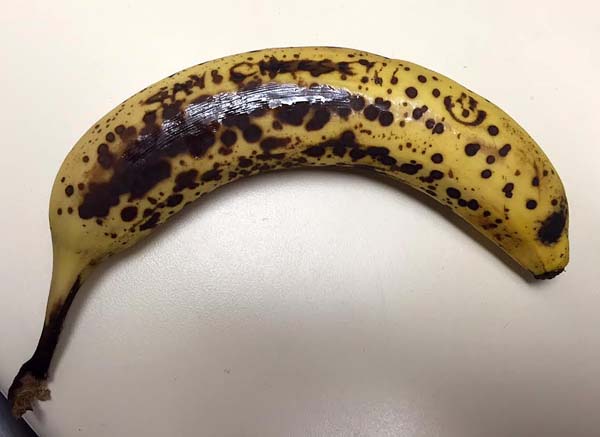 And if you are me, and love nothing more than a power struggle (HAAAAAAAAA), you then place the sticky banana on the counter and tell its owner that the banana needs to be consumed at her earliest convenience. Except she refuses, and bananas are, like, 39 cents/pound, and despite the fact that wasting food makes me crazy, I will probably turn that banana (and its rejected cohorts) into a baked good this week. Which means: the moral of this story is that life is demanding and sometimes sticky and doesn’t go as planned but then, hey, banana bread!

I had this whole master plan of taking some time off this summer and then Getting Serious About Work Stuff again once the kids went back to school. It was a sensible idea, I think. But then school started and I kept saying “sure” to stuff because I like to help out and lots of other parents work full-time away from home and I am basically working part time from my home office and only answering to my dogs (make no mistake; they’re pretty demanding when it comes to the kibble, but on the other hand, they do tend to sleep about 20 hours/day) and I have guilt because it’s part of my DNA. Sure, I’ll help. Sure, I’ll take care of that. Sure, I’d love to be a part of that committee!

One month into school and I am… uhhh… in charge of a lot of things which suck up a tremendous amount of time but are “volunteer” positions. So I think about ramping up work stuff and then I wonder when, exactly, I am planning to sleep if I do that. The next thought, of course, is maybe I am just super-lazy and making excuses and really, is this other stuff taking THAT much time, REALLY? But then I go spend seven consecutive hours sweating my ass off in Concessions on a Friday night and it does seem plausible that I’m not just a whiner.

Issue 1: After years of involvement with our school’s marching band, I am now so completely enmeshed in… everything (I have always worked in concessions but this year my duties have expanded considerably)… that I think I’ve officially become one of the Band Mamas. The other day I was walking in to the uniform room after school as a pack of kids walked down the hall towards band rehearsal, and there was Chickadee in front. I hadn’t told her I was coming (it was a last-minute thing) and her eyes widened, then she said, “Hey, look. It’s my mom. HI, MOM!”

I started to say hi back, but then the entire group shouted, “HI, MOM!” as I saw a body break from the pack and come streaking towards me. The next thing I knew, Tyra—thus nicknamed here because she is a statuesque beauty, now, but still just as goofy as when I first met her eight years ago in Monkey’s second grade classroom—yelling, “MOOOOOOOOOOOOOM!!” had run to me with open arms, leaned down, SCOOPED ME UP as if I was a small child, and commenced triumphantly twirling around the hallway with me while I flailed my airborne legs and yelped a little bit between giggles.

“Uh oh,” Tyra said. She set me gently on the floor amidst cackling from the other kids. “I’m in trouble. Hi! Bye! Gotta go!”

After years of other people being part of looking out for my kids (and keeping them in line when necessary), I’m now doing that for a bunch of other people’s kids. I like it. I’m glad I have the free time to do it. (And the spying on my own children while they’re in their natural, nerdtastic habitat isn’t so bad, either.)

Issue 2: I am now having multiple iterations of the “but if I’m not going to try to be freelancing full-time and I don’t want to take a conventional office job, what’s next?” conversation with various people. I’m not quite ready for my mid-life crisis, I don’t think, but I’m also a loooooong way from retirement. If I’m unwilling to give up this time with my kids (and, increasingly, even never-sentimental me is realizing that TICK TOCK, they’re going to be gone soon) but I don’t want to stagnate, what do I start doing that’s different?

And the answer… is… maybe… that I write… something else. Something different than this. Longer. More involved. Perhaps something with a beginning, middle, and an end. Something that might, possibly, someday, if I can release my love of lazy adverbs, equivocation, and lack of punctuation, be a… uhhhh… you know… one of those rectangular things that goes on the shelf somewhere.

I promise nothing. But someone whose opinion I trust has stopped nudging and has started outright ask “Why not? What’s stopping you?” and I realized… why not? Even if it never sees the light of day, maybe this is the next thing I need to try. More writing, but less sharing, for a while. I can do that. I think. Maybe.

Let’s start with a metaphor. That seems LITERARY and all:

There’s a sticky banana on my counter. It didn’t get consumed the way I thought it would, and it’s kind of pissing me off that it’s there. But I think I’m going to figure out how to make it into banana bread.