Not sick, and slightly useful

By Mir
August 24, 2015
Category Offspring: ecstasy and agony | Retail Therapy | What do I do all day?

I spent last week in a grudging state of malingering. Malingerment? Whatever. I was not SICK sick, you understand. I was not so ill that I could take to my bed without guilt, but I had a cold (THANKS, KIDS!) and just didn’t feel 100%. I got up in the morning and packed lunches and did the other morning routine things, then tried to work for a while and often ended up taking a nap at some point and trying to work some more and then making dinner. And I felt really stupid about it all, because: not sick. Not really. Just a little puny, that’s all.

[Aside: Now that I am officially Working Less my inherent tendency towards crippling guilt has kicked into overdrive. Not bringing in the big bucks? WE’LL HAVE LOVINGLY PREPARED HOMEMADE MEALS AND CLEAN BATHROOMS! Because if I’m not singlehandedly taking care of the mortgage, by God, there WILL be from-scratch focaccia with dinner! So what if I have to wash my hands twelve times while I’m making it because of all the nose-blowing and whatnot? I WILL COOK FOR YOU AND YOU WILL APPRECIATE IT. Also I appear to have made myself entirely too useful at the high school; I blinked and found myself holding no fewer than three positions requiring actual thought and action. I’m dumb.]

It was sort of a long week, is my point. Life didn’t stop and I wasn’t sick enough to opt out, so I just dragged along until I started feeling better on Friday. This meant, of course, that I tried to Do All The Things over the weekend and now today I’m tired and cranky. This whole being an adult thing seems overrated.

I kicked off the Weekend Of Things with a marching band committee meeting early Saturday morning, and I tell you what, if ever there was proof of my deep and abiding love for my children, going to a first-thing-in-the-morning meeting on Saturday is it. My brain doesn’t even turn on before lunch on Saturday, usually.

The children, though. Let’s back up a sec. School is going along well, truly. I mean, for the most part. And I’m doing this COMPLETELY TERRIFYING thing this year where I’m going hands-off with Chickie. I mean, not that I just hollered “Good luck with that!” over my shoulder and disappeared, or anything, but I have a whole arsenal of supportive actions I usually do for each kid (contact their entire support team before school starts; send an “intro” email to all their teachers the first week; handle any issues that arise, etc.) which we agreed I would step back from, this year. Next year she’s going to have to make her own way with Disability Services and her professors at college, so THIS year is her training wheels year of self-advocacy. I’m here, but I’m letting her do everything herself.

She’s handling it like a champ. This is great news for all of the obvious reasons, but also because somehow everything got all screwed up for Monkey this year and I feel like I could spend a full 40 hours each week trying to get it all untangled. First there were two classes he HAD to take which were only offered in one section, the same period. The school kept insisting there was nothing to be done; he’d just have to let go of taking one of them (even though they were both required). It’s weird, though, because I feel like he is not the first kid in the history of public school to have a schedule conflict like this, y’know? Eventually we worked out a “period of record” shift for one class, where he works independently on Class A during that other period, and he officially attends Class B during the conflict period, but every Monday he goes to Class A that period, instead, to get his work for his independent study the rest of the week. (Did you need to take some Excedrin and lie down after all that? I did.)

No sooner had we worked all of that out, then our online parent access started telling me that Monkey was a senior. I… have no idea how this happened, and neither does anyone else, and no one seems to know how to fix it. (I suggested that perhaps the district is instituting a new “skip one grade, get another one free!” program, but no one seems to find that as amusing as I do.) It’s fine in the sense that we all know he’s in 11th grade, not 12th, but not fine in the sense that 1) it’s screwing up his class rank on his transcript (and there may be summer programs for which that will matter) and 2) there’s all kinds of automated folderol that’s going to start going out for the seniors, and he’s on track to receive about a million nastygrams about not having enough credits in this or that for graduation, because he, y’know, doesn’t have enough credits because HE IS NOT A SENIOR. That’s still in progress.

Anyway. Back to Chickadee: she is doing an amazing job of taking care of her own stuff, advocating for herself, etc. And so it was that about a week into school she realized something about her schedule wasn’t quite working for her, and she went and talked to some people and looked at some options and finally came home and said, “Here’s what I’m thinking because of these things” and we talked about it some and—after a while—we jointly arrived at the conclusion that “these things” was actually a bit of a smokescreen for “those things” where “those things” = real issue, and once we got to THAT, we were able to talk through to a possible solution. On Friday she went to school and made the necessary change and all was well.

EXCEPT. In order to accomplish the thing she really needed—which had nothing, actually, to do with the class that ended up getting the axe—she had to drop a class with one of her favorite teachers. She’s had this same teacher every year she’s been at the high school, and had signed up for this class even though she didn’t need it because she just thought it’d be fun, but it ended up being a casualty of this other change. Said teacher (jokingly, I think) texted me to protest, and Chickie, being Chickie, became really concerned that the teacher was genuinely upset with her. They messaged and she was STILL worried, so the solution was clear: An offering had to be made. The teacher in question is always the first to show up for IEP meetings and partake of whatever goodies I’ve baked.

So part of what I did this weekend was bake, and if it was me, I simply would’ve brought in a plate of cookies and called it a day, but Chickadee is not me and Chickadee is awesome, so instead, this is what her teacher got this morning (click to see it bigger if you can’t read it): 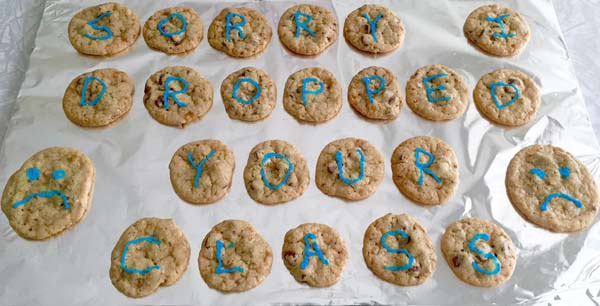 Other things I did this weekend:

* Bathed both dogs, because they were starting to smell an awful lot like… dogs. Chickadee and I spent a delightful hour closed in my bathroom with two wet and angry pups, and in the end we humans were soaking wet (we put them in the tub together and Chickie usually gets in the tub as well, and I stay outside the tub but act as guard/rebounder against all wet dogs) and the dogs were dry and fluffy and delicious-smelling, but still kind of mad.

* Went to Costco. BUT MIR, you might say, DIDN’T YOU JUST GO TO COSTCO A COUPLE WEEKS AGO? DON’T YOU USUALLY ONLY GO EVERY FEW MONTHS BECAUSE IT’S FAR AWAY AND YOU’RE LAZY?? And I would have to answer YES on both counts, but YOU SEE, we had our bonus/rebate check thingies the last time we went and we forgot to use them and they expire this week. So we went back! That meant the trip a couple of weeks ago was hundreds of dollars worth of the usual staples (coconut oil! maple syrup! fruit snacks! rice! butter!!) and this too-soon trip was like an exercise in buying my children’s love. Somehow I ended up with all manner of junk food. I don’t know how it happened. But I also got a new desk chair. ALSO: Costco carries a veggie burger in the refrigerated section that is freakin’ delicious—we bought a package last time and instead of only feeding them to the resident vegetarian, we all ate (and loved) them, so we bought some more to freeze.

* Had a lunch-and-shopping outing with a girlfriend, which was totally good for my soul, but also caused me to wax paranoid about the whole paradigm where I buy cheap stuff at Kohls because CHEAP STUFF AT KOHLS but then I earn Kohls Cash and I have to go BACK and buy MORE cheap stuff at Kohls and I say I can quit any time I want to but I’m starting to feel kind of dirty. Related: I got some really cute shorts for $4. Shut up.

* Did not go grocery shopping. Look, I was GOING to. I was. But it was raining on Sunday and I was baking cookies and we’d just been to Costco, y’know? So what if we’re out of orange juice and nearly out of milk? I’ll go today. Maybe. Who wants veggie burgers and 10 pounds of butter for dinner?

* Sent a million emails as part of that whole “oh sure, I’d love to help the school take care of that stuff” mess I’ve gotten myself into. One of the things I do is send out some announcements emails for a couple of different groups, and for one group I have one person tell me what to send and for the other I have about ten different people telling me what to send (and so that one is a little more complicated). I sent out the multiple-contributor one and got an email no more than five minutes later from one of the contributors that said PLEASE DON’T FORGET THIS THING I ASKED YOU TO INCLUDE, so I went back and checked to make sure I had included it. I had. I wrote a response email that included the phrase “get your panties out a wad and learn to read” and then replaced it with “of course, it’s in the update I just sent” instead because I’m a lady. Moral of the story: No good deed goes unpunished!

This morning I got up and cleaned the kitchen before breakfast like some sort of person who gives a damn. I don’t know what’s happening here, quite frankly. Then we were discussing the logistics of who would take Monkey to an appointment after school and Chickadee was all, “I can take him, you know. I don’t mind.” And that light at the end of the tunnel glowed just a little brighter.

Can I offer you a cookie? We seem to have a lot of them.