Every Christmas, Otto makes his family’s traditional Christmas cake, which is actually a recipe that yields TWO bundt cakes. If we have company or are up north visiting, both cakes are consumed. If we’re down here with just us four, one cake gets eaten and the other one gets wrapped and put into the freezer in the garage.

I liked the Christmas cake well enough when I was still eating wheat, but I did not… how shall we say… hold it in the same reverent esteem as Otto and his siblings do. And this is sacrilege, you understand, not to feel a deep devotion to the sacred Christmas cake. (It’s hard to explain to someone how nostalgia might augment a taste in a way that cannot be recreated for those who lack similar experience.) No matter—Monkey was only too willing to jump on the Christmas Cake Is the BEST! EVER! bandwagon with Otto, plus Chickadee isn’t exactly going to turn down an offer of cake, especially for breakfast.

This is all preface to saying that last week, I went to get something out of the garage freezer, and I saw the second Christmas cake in there, and decided it was time for second Christmas. I pulled the cake and set it on the kitchen counter.

“Is that… CHRISTMAS CAKE??” asked Monkey, licking his lips.

“Yep,” I said. “Merry Christmas!” My family proceeded to eat cake every morning until it was gone, and I felt like a hero without expending any effort, so I’m calling it a win all around. Plus I was patting myself on the back about how great it is to have that extra freezer.

That hubris, you understand, is where it all went wrong.

For those of you following along at home (that’s, uh, everyone? unless you’re reading this from inside my house OHMYGOD WHAT ARE YOU DOING IN MY HOUSE??), it was about eighteen months ago when we decided it was probably time to replace the freezer. I know this is going to come as a huge shock, but: we haven’t replaced it yet. Said freezer is coming up on 16 years old and there have been multiple indications that its lifespan is coming to an end, AND YET, yeah, I have done nothing. Because… reasons. Or indecision. Something. Back when I wrote about it before, I was set on getting a chest freezer. But several of you said OH NOES NOT A CHEST FREEZER and I began to rethink it. And then I thought about something else. And then I stopped thinking about it altogether. Lalalalalaaaaaaa.

The freezer continues to limp along, and I continue doing what I do best, which is shoving things in there with no rhyme or reason and then being flummoxed when 1) I can’t find anything and/or 2) I discover ancient food frozen into the shelves. And then, of course, there’s also the occasional disaster.

Two days after I pulled out the Christmas cake, I went out to the garage to grab something from the freezer. I turned back to reenter the house, hit the door with my heel, and went on my way. Later I left to go somewhere for a while, and yes, I went out through the garage (seeing nothing amiss), and it wasn’t until I returned hours later and there was water all over the floor that I realized I somehow hadn’t closed the door all the way. 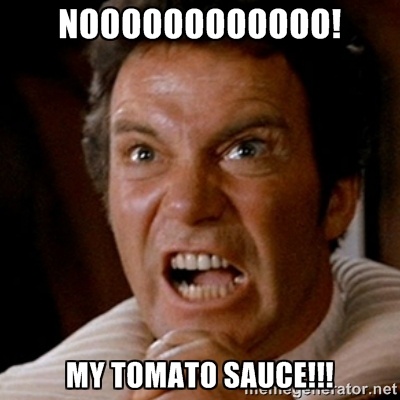 Everything in the front of the freezer was soft and frosty and everything further back was now buried in ice drifts and I was SO MAD at myself for not checking the door. AGAIN. I kicked the door shut and tried to forget about it.

The good news is that we’d been discussing a trip to Costco because supplies had been a bit low, anyway, so it’s not like I had a full freezer when this happened. The bad news is that, obviously, we needed to do the whole routine of cleaning out the freezer in the kitchen and then filling coolers with ice and going through the ENTIRE outside freezer to do the whole “chuck or salvage?” routine, and I hate doing that. We put it off until late last night when Otto pointed out that today is garbage day and we really should get it taken care of. Throwing away food makes me ragey. Going through the freezer is Not Fun. Plus EVERY TIME we do this we have the “We should really buy a new freezer” conversation which is just a great way for me to feel like my ability to be an adult in the world is decreasing with every passing year.

Probably we should buy a new freezer. I mean, we definitely should. We totally will. Soon. Maybe at Costco! I mean, there’s nothing like chiseling freezer-burned Brussels sprouts and last year’s turkey carcass out of your dying freezer to make you feel like shopping, amirite??

My decimated garden means that the first order of business was to rescue the tomato sauce as if each Ziploc was one of my children, and fortunately those were far enough back that I think it’s all okay (phew). But the other day I noted that the only thing I still have a ton of outside is basil, and maybe I should make some more pesto. And then as we emptied the freezer we found container after container of pesto. From 2012. So. Apparently I like MAKING pesto, but possibly we don’t like EATING pesto as much as I thought…? Hard to know.

There were a couple of vodka bottles that were nearly empty. Part of cleaning out the freezer is using stuff up and making more room, right? Right! Besides, that made the whole ordeal a little more palatable. You should’ve seen me when I discovered we still had a (not ruined!) package of ribs way down in the bottom bin. It really was just like Christmas.

Today the garage freezer is empty, clean, dried, and currently pushed back into place and coming down to temperature. The kitchen freezer is full, and two coolers next to it are loaded with (mostly) ice and (some) additional food. I am definitely going to start shopping for a new freezer today.