The joy of siblings

There’s nothing more magical, as a parent, than seeing your perfect offspring lavish one another with the kind of tender care they’ve learned from your perfect example. I mean… I assume. For other people, who actually set a good example and have kids who follow it. I hear this is a thing, anyway.

But no, in our house, it’s more like… well, I’ll let you see for yourself.

Monkey usually does the kids’ laundry as one of his chores. And Chickadee almost always throws at least one pair of jeans into the hamper still threaded with a (not-to-go-in-the-wash) belt. Monkey has pleaded, cajoled, threatened… all with no results. So this weekend he did the laundry, found a belt, and created his own cautionary tale. 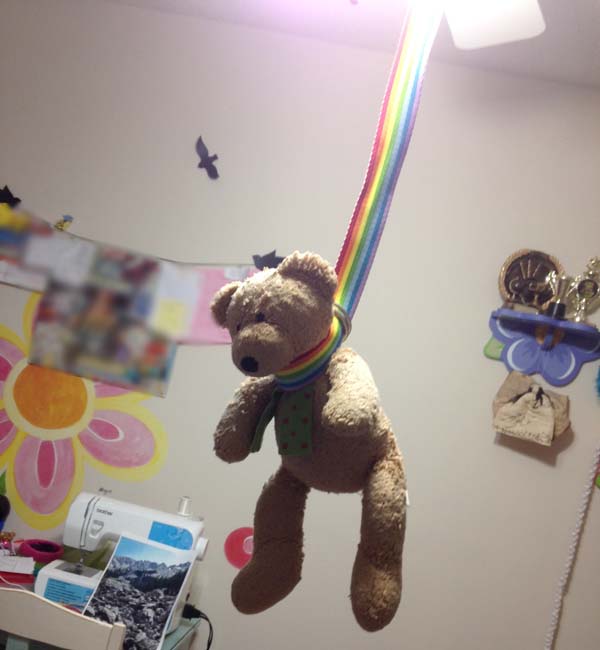 (That’s Honey Bear, the only stuffed animal still hanging around in Chickie’s bed. She was a gift from Kira after our scary car accident years ago.)

There’s an argument to be made that this tableau isn’t all that terrifying because it’s a rainbow belt, y’know, and maybe Honey Bear was just going for a ride on the ceiling fan…? But Monkey’s intent was sinister, and rainbow or no, it’s a lynching of an innocent. I mean, Honey Bear doesn’t even wear pants. It’s not HER fault the belt keeps showing up in the laundry.

Without skipping a beat, my darling daughter left her own message for her brother in response: 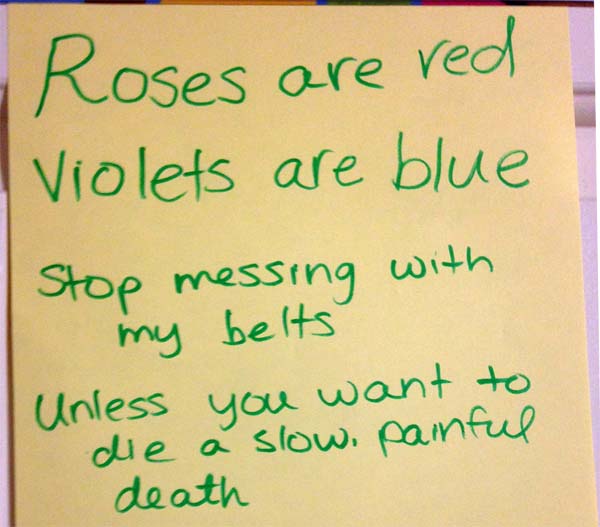 I admire their creativity, I do. I am just… uhhh… a little scared, sometimes.

I have another—less violent!—sibling story for you today, too. It’s over at Alpha Mom, and it’s about comparisons and consequences.