The State of the Duncan Address

We’ve crested the three-week mark with Duncan, so I thought you might like to know how he’s doing.

I’m kidding, of course. I don’t care if you care how he’s doing. He’s my SMUSHY LITTLE BABYKINS SWEETIEBOY and one of the only one of my children whose problems I can actually solve (the other one with solvable problems is, of course, Licorice), so I’m going to tell you about him whether you care or not. I’m selfish like that. 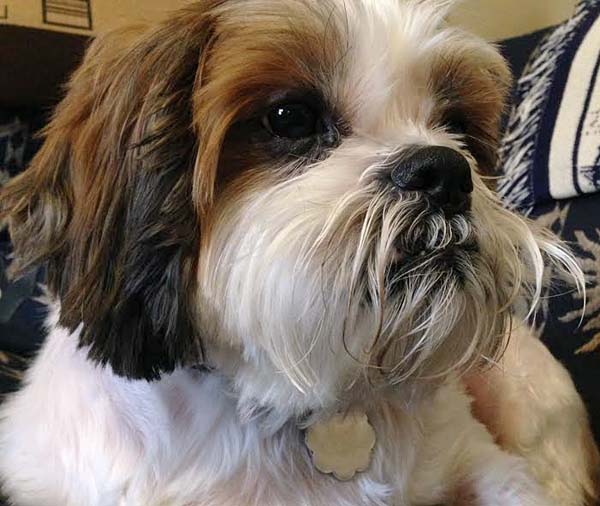 … if this face doesn’t make you start talking in a high-pitched baby voice, I just don’t know what to tell you.

The really super-great most fantastic news is, of course, that Duncan is responding well to the meds he’s on and the medicated shampoo and the fancy grain-free food and daily coconut oil and he seems to be getting healthier by the day. That doesn’t change the fact that his hind legs don’t seem to work quiiiite the way they should, and that his vision seems to be somewhat compromised, but overall he is healthy and happy. So that is a major YAY all around.

[Sidebar: For a while we thought he was incapable of climbing stairs. He can do it, but the coordination of his hind legs for the task does seem kind of taxing for him. On the other hand, maybe he’s just a spoiled prince. We’ve had a ton of rain lately and when we take the dogs out in the rain, he will just walk out and pee right on the porch if we’re not staying on top of him and making him go down to the stairs to the lawn. Brat.]

We are still working on teaching Duncan that not everyone likes to play with their teeth; he’s a little nippy (not aggressive, just not understanding that we are not chew toys) still and as we never had to deal with that with Licorice, I’m still figuring out how to break him of that habit. Also HOLY HELL is this dog a talker. Licorice barks only when she sees something outside or someone is at the door. Duncan barks only when he sees something outside, or someone is at the door, or he wants to play, or he’s bored, or you have something he wants, or… yeah. He also has a pretty impressive howl for such a little guy. (I think it’s kind of hilarious, but Otto keeps saying, “Oh yeah, this is going to be FANTASTIC the first time we take him camping….”)

Other positive pieces of Duncan news:
1) It would appear that he loves Monkey best of all the house humans. Which is exactly what I hoped would happen. GOOD DOG!
2) All Duncan wants in the world is for Licorice to play chase with him. All Licorice wanted for the first two weeks was for Duncan to go away and/or die. They are playing now—somewhat grudgingly, on Licorice’s part, as Duncan announces his intentions by barking in her face until she responds—confirming my belief that OH YES LICORICE TOTALLY WANTED A BROTHER.
3) Mystery Butt is healing up. 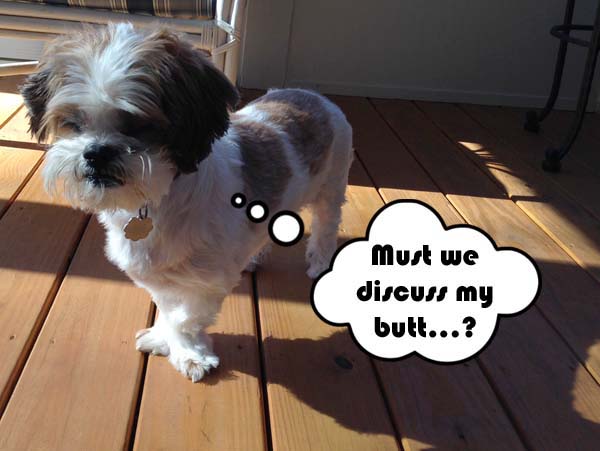 I don’t know if you noticed in this earlier picture of Duncan figuring out our little doggie door, but he came to us with an… interesting… hindquarters situation: 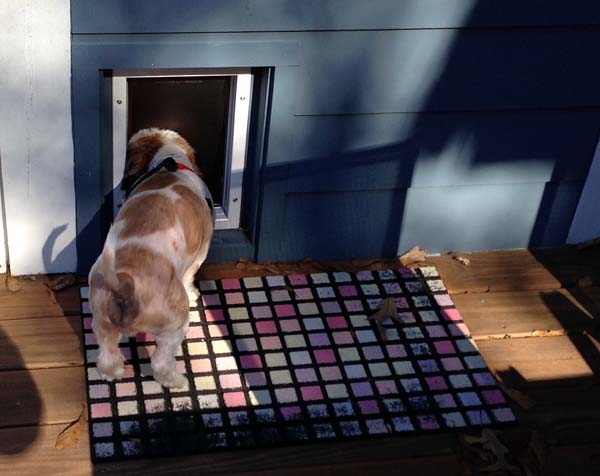 I asked the vet about it and he said it was just another manifestation of his skin issues, though I didn’t ask a lot of questions because I wasn’t entirely sure I wanted to know what, exactly, might turn your butt-area black. Just sayin’. He said something about food allergies and inflammation and I just nodded and moved the conversation along.

ANYHOO. I now spend an inordinate amount of time admiring Duncan’s hindquarters, because the skin has resumed a healthy pinkness and the fur he’s missing there is starting to grow back in. This means I’m often all “OH DUNCAN WHAT A BEAUTIFUL HEALTHY BUTT YOU HAVE” while my family is all “WHY DO WE HAVE TO LIVE WITH THIS FREAK OF A WOMAN?” It’s magical. 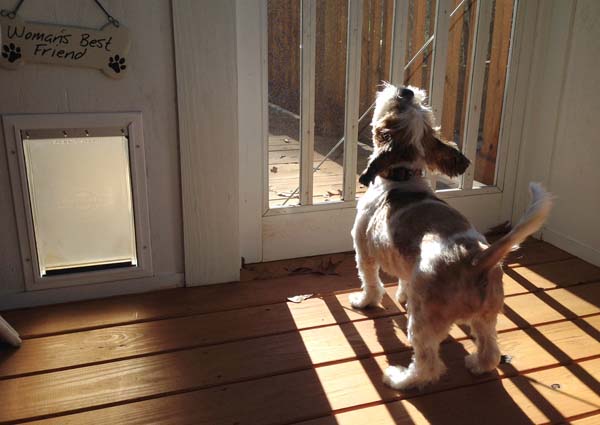 See? Here Duncan is wagging and howling at the screen door for Licorice to hurry up and come back inside so that he can bite her ears, and underneath his blur of a tail you can see TOTALLY NORMAL BUTTICULAR PRESENTATION. (That’s a thing. That I just made up.)

Some people are proud of their children’s athletic or academic achievements, I am proud of my dog’s butthole.

Okay, FINE. I’m also just generally pleased that he’s turning into a really sweet, good dog and a nice fit for our family. AND that he has a healthy butt. Whatever.