We’ve completely gone to the dogs

I know, I know. I was all LOOKA MY NEW SMUSHY PUPPY and then I disappeared. Almost like I had a life, or something. Except no, I totally don’t, I just have this here newish dog who is a complete mess. Needless to say, this both confirmed my belief that he’s totally part of our family AND has kind of been keeping me busy.

Anyway, we had to go see the vet. 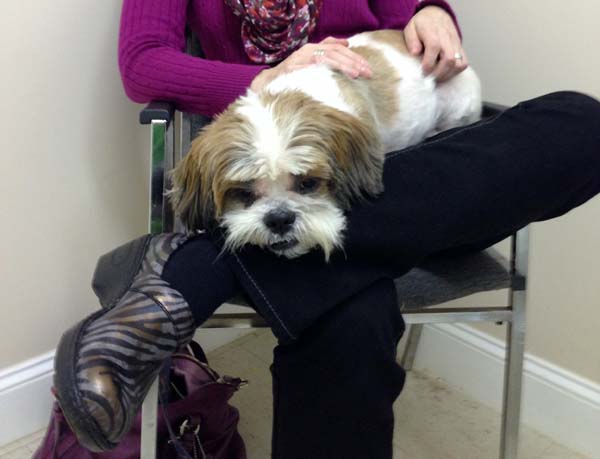 “I am the saddest sad who ever sadded. WHYYYY MEEEEE??”

The good news is that the vet was all “I have an open appointment right after you pick up your kid! Come on in!” The bad news is that THEN two dogs who ate rat poison came in, so we had to wait for an hour. Neither Duncan nor Monkey were pleased. (Monkey busied himself with taking pictures, then playing every game on my phone, and later he was allowed to visit an owl they had in the back who escaped his enclosure and drank the vet’s coffee. So I think maybe I’ve been forgiven because OWL DRINKING COFFEE.)

[I assure you the owl thing really happened. Because if I was going to make up a story with an extraneous owl, I would never in a million years have it drink coffee. In related news, I think I figured out why owls stay up all night. *rimshot*]

Anyway, Duncan is itchy and his skin is a mess and we have uncovered multiple… ahhh… inconsistencies in what we were told and the vet records we were finally able to obtain. Surprise, Duncan is a lot older than we thought! Surprise, every time a vet suggested appropriate treatment, it looks like they may have just… changed vets!

Duncan got a steroid shot with a Benadryl chaser and now we’re trying a few different things to get him healed up. It’s hard to know what, exactly, he’s allergic to, so there will be some trial and error involved while we try to keep him from chewing off all his skin. That’s delightful.

Along with the various medical interventions I am now slathering Duncan with coconut oil along the worst spots, and it does seem to be helping, but of course other than around his eyes and on his snout, he can (and does) happily lick it all off because coconut oil is delicious. We’re going to give it some more time before resorting to the Cone Of Shame, I think, though I’m somewhat looking forward to Licorice discovering that her pesky new brother tastes delicious. I figure it’s only a matter of time before I find her licking it all off his face.

The first couple of days, Duncan didn’t poop. (Yes, this has become the sort of place where you can come read about dog poop. You’re welcome!) This was very odd because Licorice spent her first few days with us expelling out of every possible orifice (you’re welcome, again) and I’ve never heard of nervous doggie constipation. Then Duncan was gracious enough to find a nice pile of leaves… on the deck. I’ve been taking him out and watching him like a hawk, so if you MUST know, no, he didn’t actually end up pooping on the deck. I shouted “NO!” and picked him up and carried him down the (long) flight of stairs and he just… let it go all the way down. So. Yeah. Were you thinking of getting a dog? Not anymore? I cannot imagine why. Isn’t carrying a pooping-down-the-stairs dog on everyone’s bucket list…?

Naturally this turn of events concerned me, but after that, things seemed to be… y’know… cleared… and the next few times I took the pups out, all excretory functions were performed in appropriate places and in sufficient ways.

Last night, Otto and I had to go to Fancy Faculty Event (motto: Dress up real nice for mediocre food!), so I went over all directions very carefully with Chickadee before we left. Feed the dogs at this time. Take them out at least once, and stay with Duncan because he might not go if you don’t accompany him. (Heck, the first couple days we couldn’t even get him out the door unless he was on the leash. Now he just walks out on his own, hooray.) Etc.

The event was fine (actually, more than fine; in a giant ballroom full of people, I ended up sitting down next to Jana, and now we are best friends. Jana? Why are you changing your number, Jana…?) and there were no frantic text messages, so we figured all was well. And it was, I guess, until we were in the car on the way home and Chickadee called.

“Hi, honey,” I said, figuring she was calling to ask when we’d be home.

“Do you know what’s really NOT FUN?” she replied. Uh oh.

“Cleaning a bunch of dog crap off the stair landing, THAT’S WHAT!” she huffed. Oh, dear. “And THEN trying to get the dog to go outside and him peeing all over the floor of your office! Like WHILE I WAS STANDING RIGHT THERE OPENING THE DOOR!”

She was indignant. I managed to keep from laughing until our call was over.

When we got home, Chickadee felt I was not being appropriately sympathetic, I think. She ended up yelling, “YOUR OFFICE SMELLS LIKE DOG PEE!” on her way up to bed, which certainly showed me.

For his part, Duncan was unclear about the fuss. If he could talk, I’m sure he would’ve said, “But she went upstairs without me. I needed to send a message.” Or maybe even, “Why does the large female puppy spend all her time on the tiny box with buttons?” Dogs don’t understand teenage texting addiction, y’know.

There’s nothing quite like shimmying out of your party dress and Spanx so that you can get down on the floor in your pajamas with a bottle of Resolve to keep you humble. I mean, not that a piece of overcooked steak had me wracked with delusions of grandeur, or anything, but I think the moral of the story here is that real life always awaits, and it’s often messy.

Later, Otto and I sat down on the couch to end the evening with some terrible television. Licorice jumped up and settled in my lap. Duncan jumped up and sat precisely in the middle of the couch, between me and Otto, and a few minutes later got up and walked over to stretch out half-flopped on my nearest thigh.

Television really is a lot more relaxing when you’re covered in dogs, even naughty ones.