If my GPS could talk

By Mir
August 19, 2013
Category It's not a regret, it's an "experience" | My name is Grumplestiltskin

This morning Chickadee had an appointment at Emory for chapter 593 in Mystery Rash: Where Is It Now, And Which Med Student Hasn’t Seen It Yet?, and because getting into Atlanta on a weekday is always an enormous clusterfuck, we left nearly three hours before her scheduled arrival to be ABSOLUTELY CERTAIN of getting there on time.

There’s this whole time window calculation with heading into the city, too, where if your appointment is too early you get stuck in rush hour GOING, but if it’s too late you get stuck in rush hour coming BACK, and then there’s this whoooole fuzzy gray area where you’re likely to catch the tail end of rush hour no matter what you do, and so leaving at this time is functionally the same as leaving half an hour earlier, blah blah blah blah. I thought I had it figured out, is my point.

But I was wrong, because: Rain. RAIN! OH NOES! Quick, everyone veer off the road! Still: THREE HOURS. For a drive that should take 90 minutes, tops. What could possibly go wrong?

Just let me say right here that when it gets to the point where Chickadee is making comments like, “Mom. Language!” you know it’s a… colorful… adventure. Apparently when it’s drizzling in Georgia your driving choices are as follows:
A) Drive really fast without your lights on.
B) Turn your lights on, but drive really slow in the left lane.
C) Have one or both tail lights out, but weave in and out of traffic, slamming on the brakes at regular intervals.
D) Continue texting and driving so that you drift out onto the shoulder periodically, then nearly cause an accident while drifting back to the actual lane.
E) Flip your car over somehow.
F) Drive normally and swear a lot at all the morons.

But see, the good news is that my current GPS has not just maps but also traffic updates and something called IQ Routes where it’s always working to drive me insane figure out the fastest way to get where you’re going. Even though I know how to get to Atlanta from here (drive west until surrounded by a lot of very expensive cars), I always use the GPS because it will know when there’s accidents and construction and will occasionally reroute me. There’s a little progress bar thingy down the righthand side of the display that will show things like a teeny tiny cartoon construction dude with a teeny tiny shovel, or a teeny tiny car on its side, usually with a notation of the delay with something like “20 minutes” or whatever. Very helpful.

When the GPS realizes that I’m about to spend half an hour sitting on the highway waiting for stupid people to get out of the way, it will often offer me an alternative. It looks like this: 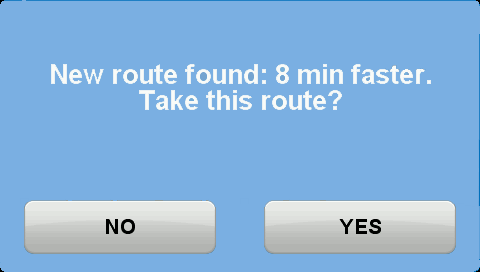 If I say yes, theoretically the new, faster route is calculated and I am taken on my way without delay. This is particularly useful for someone like me with zero inborn sense of navigation, because I have sometimes gone as much as 2/3 of the route on surface streets with the GPS guidance, and left to my own devices I would never exit the highway because I know the highway gets there eventually, but those other streets could go anywhere.

Anyway. I am accustomed to starting out on the highway and being prompted for a route change, because there is always at least one traffic issue along the way. No biggie.

Due to the early hour and various other circumstances, I had had an inordinate amount of coffee before leaving the house, and then I brought a cup of coffee with me, as well. As we crested two hours in the car (with our destination still maddeningly far away), I became aware that a good portion of my current crankiness was because I really, really needed to pee. And the GPS kept registering delays, kept offering different routes, and finally I stopped at a gas station and ran into the bathroom even though we were going to be late. Better to be late and dry than late and… well, you know.

Chickadee found the situation with the GPS hilarious. “They should totally change what it says to you,” she said. “It’ll be all, ‘Hey, I found something faster? Want it? LOL, j/k, NOPE! Sucker!!'”

She is willing to lend this idea to TomTom free of charge. 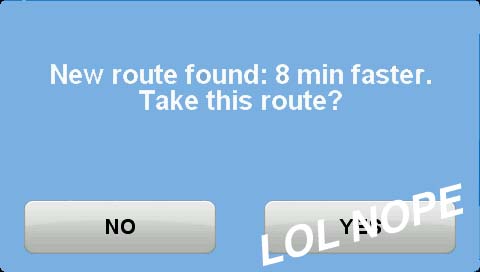 Personally, I don’t believe the GPS talks in LOL-speak. I think it talks in that humorless, fem-bot not-quite-British accent and is more like:

Your current route is now delayed by fifteen minutes. I have found an alternate route which is faster by seven minutes. Do you wish to change routes now? Really? Are you sure? You do know that as soon as you say yes, five cars are going to pile up just a mile or so down the road, right? Okay, listen, I’m in no hurry, that’s fine. Your new route is… well… yeeeeeaaaaaaahhhhh, sorry, you are now delayed by twenty-five minutes. My bad! I have found an alternate route which also sucks and takes forever. Do you feel like mixing it up or should I just quietly punch myself in the face and save you the trouble?

It’s okay, though, because we walked in just sixty seconds late and it was fine. Except that then Chickadee announced that she is “all done” taking any medication for her skin condition and that she’s not interested in treating it any further because apparently she went to med school while I wasn’t paying attention.

That totally made the three-hour trek there and the nearly-burst-bladder worth it. Yep. In other news, my GPS will now be making all of my parenting decisions for me.

You have suspended all electronic devices and are now delayed by excessive screaming. Run away from home now?

(I think it’s good that I don’t get bitter about this sort of stuff.)