I was having trouble coming up with a good way of expressing it that didn’t sound trite, I guess. Ebb and flow! Sunrise, sunset! One step forward, two steps back! The course of true love and/or parenting never did run smooth!

But, you know. There’s only so many ways to say “hey, no biggie, but this week is kind of feeling like a slog and I am tired.” Otto did a lot of traveling this month and I miss him when he’s gone; whether she’ll ever admit it or not, I think Chickadee does, too. So by this past weekend, we two ladies (using that term ever-so-loosely) (though not implying we are loose, mind you) were well and truly sick of each other and working one another’s very last nerve.

Thankfully, Otto came back last night, and I told him to STOP LEAVING US, FOR THE LOVE OF GOD. He agreed, mostly because he was done traveling, anyway. Yay!

Truly, his return wasn’t a moment too soon, because things here had become dire.

Example the first: I spent a large chunk of yesterday out of the house, running various errands and going to appointments. When I left the house, I packed up my purse, my phone, my laptop, and every available television remote. As one does. Or, you know, as one does when one looking for a way to supplant “FOR THE LOVE OF GOD, DO YOUR MATH ALREADY” with something less harpy-like.

[Sidebar: The SO SUPER FUN thing about this summer class is that five weeks is barely enough time for your kid to whip through the various stages of Schoolwork Grief, which means that by last week we’d arrived at firm lodging in “I’ll do it later, no biggie” and subsequent forehead-vein-pulsing from me. It’s true, she’s getting everything done, but after a week of nights where she was still up working when I surrendered and went to bed, I could no longer live with this particular schedule. This led to a showdown at ye olde Stubborn Gals Corral, and that led to my absconding with the remotes.]

By the time I got back yesterday, it was clear to both of us that something had to change. I had to stop making disapproving noises with my mouth, for example. And she had to actually get some stuff done. An uneasy truce was reached, and then Otto came home.

Example the second: In the course of cleaning up her room, apparently Chickadee discovered a few items meant for the outgrown-clothing bin that had somehow never quite made it in there and subsequently been toted off to Goodwill for donation. So late last night, as Otto and I sat chatting in the family room, Chickie came downstairs to show us the teeny, tiny training bralette she’d found in the back of her closet. This was hilarious, of course.

First she wore it as a headband. It fit her just fine that way, if that gives you some idea of how small it is. And lo, how stylish!

Next she managed to put it over her chest (over her clothes) and I figured things couldn’t get any more hilarious, because—between the pained look of asphyxiation and the awkward placement of the garment—that was pretty darn funny.

But then… well, the rough week had clearly taken its toll on her.

This is just not right: 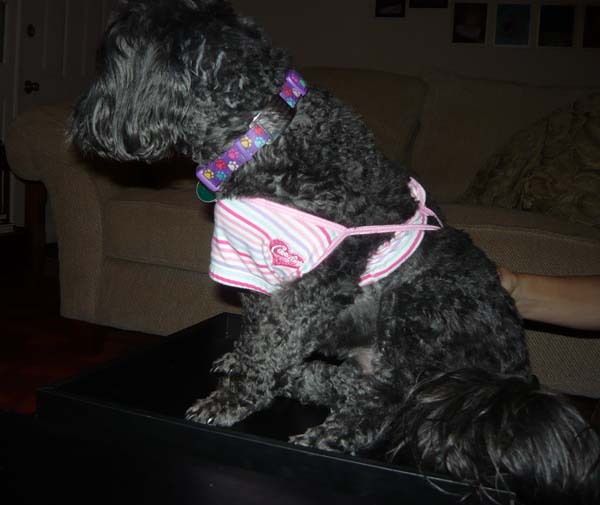 Licorice is so embarrassed, poor thing. But it got worse: 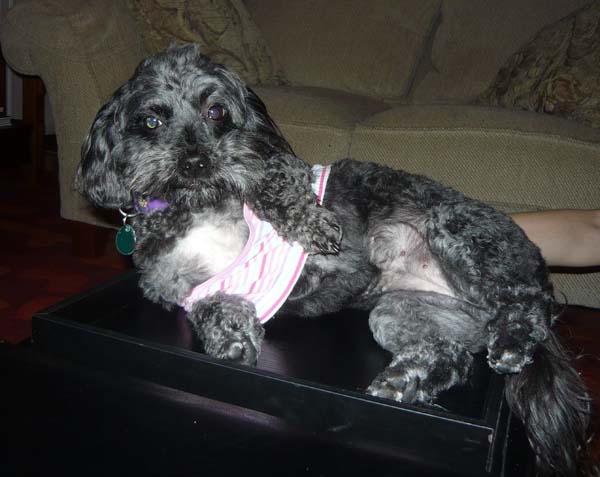 “I hate you all SO MUCH right now.”

Moral of the story: Sometimes life is hard, and sometimes you put a tiny bra on your dog. Or something.