How I make it all even out

Ah, glorious springtime! The birds are chirping! The lizards are leaping! The pollen is… pollening. Yes.

Like any other red-blooded American family, this time of year means that we are committed to cleaning and repairing various facets of our dwelling, because everyone knows that warmer weather + tax return = copious swearing from someone on a ladder. That’s just how it works.

I feel like every time we set out to do “a little project” it turns into our own special brand of “there’s a hole in the bucket.” (Why yes, I’ve noted this before, because it’s been happening for years.) This has a three-pronged effect of making me insane, because 1) the MONEY part of it makes me panicked and neurotic no matter how much mental preparation I’ve done and even if all the necessary money was set aside beforehand, 2) the TIME aspect just adds to the fun as I become convinced that life will never be normal again, and 3) the MESS is just the final, OCD cherry on the losing-my-marbles sundae.

Perhaps Otto and I need to have our own home improvement show. He can be all calm and capable and get stuff done while I run around pointing at holes in the wall and crying.

So I mentioned that we had some plumbing work done, about a month ago. That has only been on the to-do list for about… a year… so I’m 100% glad we finally got it all taken care of. No more leaky showers! No more listening to the children accuse each other of being the one who didn’t turn the water off all the way and/or insisting that it’s just too haaaaaaard to do it right. Now each shower turns on when you turn it on and turns off when you turn it off. LIKE MAGIC. I hear this is how most people’s showers are, but I’m still finding it quite wondrous. Sure, when the bill came Otto actually blanched a bit (turns out that having a couple of plumbers here for an afternoon is kinda pricey), but it’s all good! Working, non-drippy showers! Planned-for expense! No worries!

Yeah. Except… as I noted last month, I hadn’t QUITE wrapped my brain around that whole “giant hole in the upstairs wall” thing that resulted from the plumbing work. That room is kind of a bonus space outside of Monkey’s bedroom with bookcases and a daybed and a loveseat and a TV. When the plumbers were here, we had to move a bunch of stuff in such a way that the cozy little lounging space immediately became two separate areas: the place where drywall dust was taking over the world, and the place where furniture was stacked and unusable.

[Sidebar: I thought this would be perplexing to Monkey, who spends quite a lot of time in that room. But he’s an innovator, you know? He took all the pillows from the daybed and tunneled UNDER the stack of furniture to make himself a little nest in the far corner, behind everything. The first couple of times he burrowed in there with a book I couldn’t find him.]

Anyway. It was like that for a month. Otto was spackling and sanding the wall in his spare time, but I kind of forgot about it entirely because walking into that room gave me palpitations. Clutter! Mess! AIIIIIEEEEEE!!

But then we both forgot all about it, because we’d already decided to do something totally wild and crazy with our tax return this year: We’re putting a new liner in our pool. Like a boss! Or, you know, like people who want the water to stay in the pool.

I am aware that complaining about the process of getting a new pool liner is kind of like bitching that your caviar was served in the wrong crystal, or whatever. Back when I was young(er) and naive and totally believed that having a pool would bring our children countless hours of delight and make us a destination for their friends, I was SURE that owning a pool would be cheaper than paying the exorbitant (to my mind) fees to belong to a club pool. HAHAHAHAHAHAAAAAA. Well, now I know that I was stupid, and NOT ONLY is owning a pool ridiculously expensive, but owning a pool means that your children will constantly want to go to the club pool with their friends, instead, because GOSH MOM.

At this point I am basically maintaining the pool out of martyrdom, you understand. (And maybe also because I really like going swimming and not worrying about blinding bystanders with my lily-white skin.)

So. The pool. Forget the hole in the wall upstairs: pool arrangements. Because THE HOLES IN THIS BUCKET, man. It kind of went like this:
1) Call pool place about liner.
2) Pool guys make an appointment to come out and look.
3) Otto and I spend two weeks debating various patterns in the Big Catalog Of Pool Liners. It is JUST as fascinating as it sounds.
4) Pool guys come out, measure, give us an estimate.
5) Pool guys ask which liner pattern we picked. I panic, tell Otto “whatever you want.” (Choices are hard!)
6) Pool guys tell us our dinky little diving board is rusting out, give us an estimate on that.
7) We say maybe we’ll just slap some new bolts and paint on the board, okay? Okay.
8) Pool guys point out that the stairs are cracked.
9) Otto asks for an estimate on new stairs.
10) Pool guys give estimate.
11) Otto administers CPR to me. Then he asks the pool guys if they can recommend someone to fix the existing stairs.
12) They recommend someone. Then they leave in a hurry, possibly because I’m still hyperventilating.
13) Otto calls the steps guy.
14) Steps guy gives Otto an estimate. Otto gives me CPR again.
15) Steps guy tells us to call once the pool guys know when they’re coming.
16) Pool guys call to say the liner is in, when can they come?
17) Otto calls the steps guy to set up the repairs, then calls the pool guys back to tell them when to come.
18) We drain the pool. Because it’s been uncovered since measuring, it is full of swamp matter and half a dozen very confused frogs. Also a bonus dead snake.
19) Steps guy cancels due to illness.
20) Otto calls the pool guys to reschedule, tells them he’ll call once the steps are done.
21) Steps guy finally comes and fixes the steps. Hooray!
22) Steps guy tells us we should also really refinish the metal border that goes along the concrete at the top of the pool. He gives us an estimate. Otto administers CPR for a third time.
23) We agree to the border refinishing. Oops! He doesn’t have the materials he needs, and they have to be special ordered. OF COURSE.
24) Otto grumbles about how all he’s going to see, now, is the needing-to-be-refinished metal trim.
25) Otto calls the pool guys to tell them to come ASAP; they point out that it’s supposed to rain all week. Because of course it is.

By now you are either asking yourself “Why am I reading this, again?” OR “What in the world does this have to do with the hole in the wall??”

If you are asking the first question, I cannot help you. BUT! I can tell you the answer to the second one.

This weekend we were doing House Stuff (I cracked a whip over the children until the laundry, dishes and dusting were all done) and we couldn’t do anything about the stupid pool, so naturally Otto set about cleaning all of the deck furniture that was crusted with pollen. This is a particularly rewarding task in April because in a week he’ll need to do it again. ANYWAY. While he was doing that, I decided that The Hole In The Wall had to be fixed and the room reassembled before my eyelid began twitching.

So I went up there and sanded the patch and cleaned the wall and vacuumed and then announced to Otto that I was off to Ye Olde Big Box Hardware Store to buy some paint. “What color did you decide on?” he asked.

Somehow, I ended up walking into the store and asking the kid behind the paint counter if they had any “oops” paint. Have you ever done this? Places that mix paint will take mis-tints and/or returns and put them on a special clearance rack. I figured I’d start with whatever was cheap and see what my choices were. He took me right over to the rack, where there was… a single gallon of paint.

The dot on the lid looked brown. But not really brown. Kind of a muddy… something? I wasn’t sure. I asked the kid if he could paint a piece of card with it, for me, so that I could see it better. He looked at me like I had three heads but did it, anyway, and when he handed the card over to me, it was clear that this paint was… some amalgam of gray, brown, and purple. It was interesting.

Okay, fine; it wasn’t interesting at all, but it WAS only $5. I bought it.

Back at home, I got the area prepped, and in no time at all I’d painted the crap out of that wall with this FASCINATING color I’d purchased. Turns out that once it really dries—or maybe just because of the surroundings up there? I don’t know—this particular paint is kind of a purple-gray (no brown). It’s not bad (cruddy picture notwithstanding). 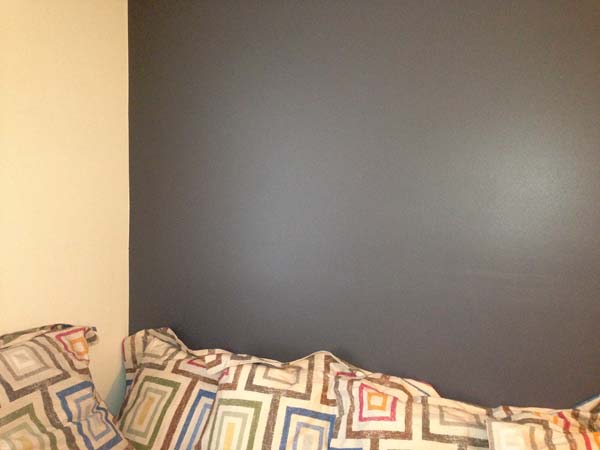 I mean, would I have ever picked it, normally? Of course not. But by the time I finished the second coat, it had grown on me. (Apparently Monkey likes it, too, if the crumpled-up pillows on the daybed are any indication of where he’s been nesting, lately.)

[Sidebar: Like I said, it’s not a very big wall. I maybe spent two hours, all told, prepping, taping, and painting. But then I had to spend ANOTHER two hours, once I had one pristine wall, scrubbing the REST of the walls up there with Magic Erasers. Are my children particularly disgusting, or do you, too, have grubby handprints and other marks of mysterious origin all over your walls? And the doorways, LORD. The level of grime was terrifying, both in its abundance and in that I had somehow ignored it until there was a clean piece of wall making all of the other walls look bad.]

You know, I only spent $5 on a $30 gallon of paint. (I only needed a pint, but a pint would’ve cost me more than the whole gallon. So now I have… most of a gallon left over.) I totally saved enough money to offset the pool costs! That’s, like, a couple of bolts for the diving board, or something. IT IS. And I am totally walking around the house now, pointing to things and asking Otto “Hey, should we paint THAT purple-gray? I HAVE PAINT!”

I just want to get my money’s worth out of it, you understand. It’s a shame it’s interior paint—I think it would look LOVELY on the trim around the pool.