The truth about true love

By Mir
December 20, 2012
Category Ottomatic For the People

Here is where I consciously choose to get away from The Heavy because I just need to, and we all pretend that’s perfectly logical and seamless and not weird. Yes? Yes.

Sidebar: Chickadee is supposed to get on a plane in a few hours. As of this moment, that’s still on schedule to happen. If you wouldn’t mind just, you know, crossing all of your fingers and toes that she shows up here tonight, that would be super swell. And it’s really not even for me; Monkey told me all he wanted for Christmas was for his “sissy” to be here with us, and then I melted into a puddle of goo, and that means it’s not even me being selfish and missing her, anymore, but about THE CHILDRENS and so I am just going to hopehopehope that tonight goes according to plan because DAMMIT something has to, this year.

In the meantime, I always have Otto here to entertain me. That’s what it means to love, honor, and cherish another human—you also provide them with blog fodder. I’m pretty sure it was in our vows.

And really, even if it wasn’t, it’s kind of too late for him now.

So earlier this week I was… uhhh… a little bit stressed out. Nothing earth-shattering was happening, not really, but I was sad and tired and a number of small things were just making me crazier than usual, and the result of this series of events was that I came home from running errands one afternoon and I was FUMING because I had—in the course of a day of numerous travels and appointments—gone to two different grocery stores, and NEITHER of them had cilantro. NO BUENO.

(Little-known fact: The straw that broke the camel’s back was put there as a placeholder for some desperately needed cilantro, and—being heavier than the herb in question—overloaded our poor dromedary friend. True story.)

I had made a MEAL PLAN. Even though I was sad and tired and stressed out. And that plan required cilantro. Nay, it HINGED UPON cilantro. And yet: NO CILANTRO. And because of yet ANOTHER appointment I hadn’t been able to run to a THIRD grocery store, which is probably just as well because I was pretty much foaming at the mouth and speaking in tongues by then.

I banged my way around the kitchen, ranting about my day and putting away all the groceries which were not cilantro, and Otto listened attentively and Monkey patted my arm whenever I would hold still enough, and finally Otto put a reassuring hand on my shoulder and looked deep into my eyes and said, “In a little while here, I am going to go out and pick up something for dinner. And I will go to the store and get the cilantro for tomorrow. How does that sound?”

So that is, indeed, what happened that night. In addition, Otto didn’t JUST come back with cilantro and dinner, but ALSO with a dozen yellow roses. When I asked why, he said, “You needed them.” That’s just kind of how he is. The roses are lovely and HE is the best, obviously.

And the next day I made the (cilantro-laden) soup I’d planned, and all was well. But the important thing to note here is that Otto knew exactly what I needed and HELPED in the perfect way(s). Because he’s like that.

Now, let us consider the matter of Christmas, this year. I made Otto promise me that we would not exchange gifts with each other, on account of we bought a new bed and that was expensive, plus the hospital and Medicaid are still doing the tango and we’re not entirely sure what our portion of the remaining bills is going to end up being. (Insert hysterical laughter or quiet weeping here. Or both! Sometimes I do both.) Plus: We don’t need STUFF. Not this year. I mean, probably not ever, but especially this year. No stuff required, thanks.

Otto—big strong manly Otto—made sad toddler pouty face when I first floated the “no gifts” thing a few months ago. I explained my reasoning, and he nodded, but that pouty lip, man, it was still there. I reminded him that we could certainly still stuff stockings for each other (not a euphemism, freaks), and he brightened considerably. I then felt moved to add, “AND THAT DOES NOT MEAN just buy me tiny expensive things!” He agreed. Finally.

Fast forward to now. I, of course, did my little bit of Christmas shopping for Otto months ago. Otto, however, is milking every last dollar out of our Amazon Prime, and boxes keep arriving. I am deeply suspicious, and have concerns, but he’s a grown man and after all, normally he is preternaturally perfect, so I am trying not to fret.

But today some boxes came and Otto whisked them upstairs and then later he walked into my office with a big paper-wrapped bundle and a sheepish expression. “This was supposed to be for your stocking,” he said. “But I am, uh, worried about the dog. So I’m giving it to you now.”

Wait. Worried about the dog?? Have we not had enough dog worry lately? I gingerly took the offered bundle of paper and began to unwind the paper. And as I did so, the scent of… dog toys… wafted up to greet me.

Once it was completely unwrapped, I found another dozen roses. Otto stood there, expectant, and as I peered at the bunch in confusion, he blurted out, “SMELL THEM!”

I leaned in a little closer and sniffed. Yep. They definitely smelled like dog toys.

“They’re bacon-scented roses!” he declared, all glee and pride. I sniffed them again. Oh, bacon. Right. Kind of. I was still mostly getting eau de puppy chew, but I tried to muster some enthusiasm.

“Ohhhhh…” I said. “Thank you?” Then when my folks wanted to see what was up, Otto gleefully asked them what my favorite food is, and my dad and I said, “chocolate” in unison, and then my poor thoughtful husband looked kind of sad so I insisted that ALSO I am very fond of bacon (true) and this was lovely. Though I am feeling like chocolate-scented roses (or chocolate roses, om nom) might’ve been a less… smelly… choice.

Nonetheless, when the man you love does something so thoughtful, you can’t help but love him a little more. 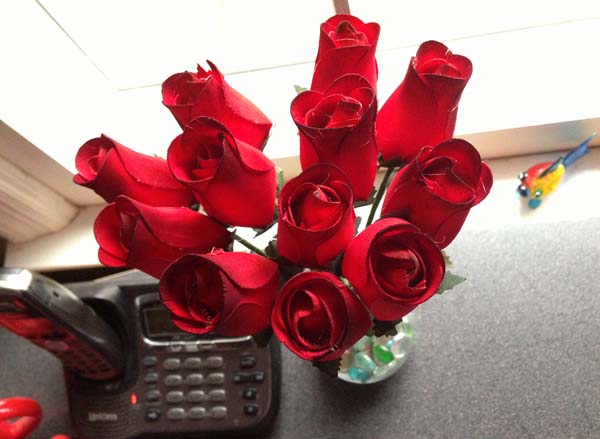 They do look awfully pretty here on my desk. And I’m sure they won’t smell quite this strongly forever, right? Right. And maybe sometime we’ll look back and not say, “Remember that awful year?” but instead will say, “Remember that year you gave me those bacon roses?”