NOT how we’re ending this stupid year

Praise the lord and pass the libation of your choosing; this awful, awful year is almost over. As Monkey might say: DANCING TIME!

Just a couple more weeks and change. And then we can kick 2012 in the rear and everything will be better. AHAHAHAHAHAHAHAHAAAAAAAAA. (Who, me? Hysterical laughter? I don’t know what you’re… oh, shut up. I’m entitled to a little hysteria these days. The logical part of my brain knows that flipping over the calendar isn’t necessary going to lift the Curse of 2012 from Casa Mir, but you just hush up and let me have my fantasy, mmmkay?)

I can see the finish line. I can practically taste it. (It tastes like peppermint, and relief.) We just have to get there.

In the meantime, we keep on keepin’ on. Otto has finished classes for the semester. Monkey finished Virtual School and has just a couple of days of Hippie School left. I’m working away (in my NICE CLEAN OFFICE, don’t you dare put that down in here, dude, it’s CLEAN and I don’t want your mess). The tree is going up this weekend, travelers are poised to travel, and all is as it should be.

Or, at least, I thought it was.

A couple of nights ago, Monkey and I were sitting on the couch, watching some television, waiting for Otto to get home. Licorice was leaping from one piece of furniture to another, and finally burrowed her way inbetween us and flopped onto Monkey’s lap for a thorough petting.

“That’s weird,” said Monkey, mid-chin-rub. “She’s shivering. Is it cold in here?” I turned to look at the dog, and it was true—she was visibly shaking.

Now, here’s the thing you need to know about smallish dogs if you’re not familiar with them: They tend to be nervous little beasties. Every single time I put Licorice in the car to go ANYWHERE I am tempted to strap a jug of ice cream mixture to her back so that she can churn it up for us with her nervous shuddering. If she gets the least bit anxious, yeah, she shakes. I am accustomed to this in the car, at the vet’s office, and even maybe if an unfamiliar (to her) man is in the house. But… we were just sitting on the couch, watching TV. Monkey was right; that was weird.

I pulled her into my lap and stroked her and asked her what was wrong (oh shut up, I AM VERY MATERNAL), and she shook for another few seconds and then snuggled into me and sighed. And stopped shaking. Okay, then.

I felt Monkey’s hands, and they were like little blocks of ice. Licorice was just groomed last week, which means she has a nearly-naked shaved belly, so I laughed and told him he was probably freezing her with his icicle hands. He apologized to the dog—who was now beginning to snore—and that was that.

Well, last night Otto came home and Licorice commenced her typical YAY DADDY’S HOME prancing—she ran in circles around my office, she went and fetched her favorite toy to show him, and she paced back and forth on the futon (and his lap) to show her joy. Then she parked herself on his lap.

“Hey, Mir?” Otto said, wrapping his hands around Licorice’s ribcage. “She’s shaking. Like, REALLY shaking.” I spun around in my desk chair to face them, and watched as Licorice tried to lean on Otto while her body continued a frantic shudder. My vision started to blur around the edges a little bit. I quickly wracked my memory; had anything been different, lately? Between the first shaking incident and now, had she been acting weird? Even now, shivering away, her tail was wagging and she continued contorting herself so as to lick Otto whenever his chin got close enough to reach. She’d been eating fine. Acting fine. SHE IS FINE. So what was this?

I told Otto that Monkey and I had seen this the other night and I’d thought it was because his hands were cold. I asked Otto if HIS hands were cold. They were not; I felt them to be sure. Licorice continued to shake. Otto—dear, sweet, unflappable, never-overreacting Otto—looked at her again, then looked at me. “Call the vet,” he said. “Call the vet right now.”

According to the clock it was 5:32. I didn’t even know if they were still open, but I dialed. And hallelujah, they were open until 6:00. The woman who answered the phone kind of talked me off the ledge, told me they’d be waiting for us, and cautioned me to drive safely.

So I took my shaking dog and put her in the car, where she commenced her regular nervous shaking, and then I drove as quickly as possible to the vet’s office, where they said their new vet would see us. Now, remember, LadyVet was my favorite and ManlyVet often pisses me off, but I had no idea whether this unknown vet would be someone who could assuage my fears or not.

Turns out, SantaVet is pretty much my favorite person ever. Yep, he looked like Santa. Santa in a Hawaiian shirt, actually. And generally Licorice 1) hates the vet and 2) hates unknown men, but within a minute or two it was clear to me that she was cautiously accepting of SantaVet. He was very gentle and spoke in soothing tones. He explained to me that it wasn’t time to panic, yet, that lots of things could cause this, and he was just going to check everything out.

Licorice passed the various neurological screenings with flying colors. SantaVet declared in a very reassuring way that this was GREAT NEWS, he didn’t think there was anything massively wrong. We just needed to keep exploring. Any kind of illness or pain could cause shaking, so clearly something was off, but probably not anything too alarming.

It was around this time (after he’d showed me that yes, when he flipped her paws back, she immediately corrected them to normal position, and see, she didn’t appear to be flinching as he palpated her spine) that I may have blurted out, “No pressure, or anything, but THERE CANNOT BE ANYTHING WRONG WITH THIS DOG.”

SantaVet and the tech who was assisting both stopped what they were doing and looked up at me. “It’s just…” I continued, lamely, “it’s just been kind of a hard year for us. And she’s my baby. So she has to be okay.” SantaVet nodded and said something about how they were going to do their best to fix her up.

And then he went to palpate her abdomen and as Licorice adjusted herself around his hands, she kind of quirked her head and one of her oh-so-floppy ears turned inside out, and that’s how I found myself face to face with one of the more disgusting things I’ve ever seen.

“OH HEY!” I said, giggling with relief. “LOOK AT HER EAR! She has an ear infection! That’s good news, right? RIGHT??” SantaVet looked up from her stomach to behold the red angry mess in front of us.

“Well how about that,” he said. “Yeah, that doesn’t look too fun. Have you been hiding an icky ear from us, Licorice?” He finished the exam while I babbled on about how she had JUST BEEN to the vet last week, you know, and she was FINE, and other than the shivering, she had been TOTALLY FINE and how could I have missed this, geez, except you know, she’d been FINE!

SantaVet put in an order for ear ointment and some antibiotics, and as I thanked him profusely, I found myself babbling and on the edge of tears. “You just… don’t understand…” I said. “This year has been so awful, my mother-in-law died, my daughter decided to move away and live at her dad’s… and Licorice just had to be okay, you know?”

“She’s 14, and she’s not doing so well, and—” I kept talking. And trying not to cry. And this poor guy! Resemblance to Santa or no, he’s a veterinarian, not a psychologist. But something about the combination of knowing Licorice wasn’t dying and his caring demeanor had apparently opened the flood gates. He walked me up to the front desk, murmuring reassurances, and reiterating that Licorice would be good as new in a few days, and if she wasn’t, he would be in the office on Saturday, just bring her right back in if I had any worries at all.

I gathered up my dog, her medicine, and what was left of my dignity, and headed back home. Otto and Monkey were relieved to hear that Licorice was okay, and after I put her ointment in her ears and forced some medicine down her throat, I gave her some pepperoni, and just like that, all was forgiven.

Later that night I told Otto about my case of verbal diarrhea at the vet’s. “I don’t know what happened,” I said. “I just… it kind of all came pouring out. They probably wrote on her chart, ‘Licorice has an ear infection. And her owner is crazy.'”

And because Otto loves me very much and is always here to support me, he considered this and said, “Probably.” 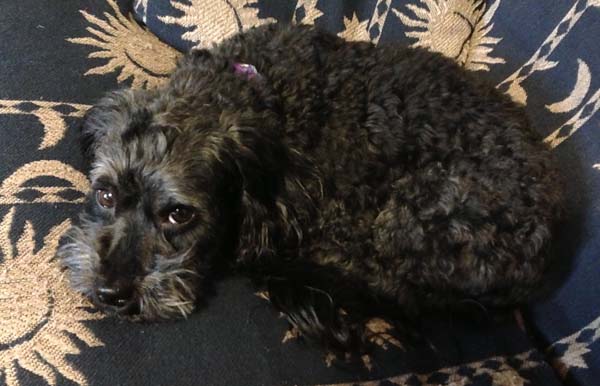 Licorice is back to lounging in my office, and her ear already seems improved, today. I, however, may require a slightly longer convalescence.