A funny thing happened on the way to the courthouse

I am not really sure how to tell this, so I guess I’ll start back at the beginning.

The first thing you need to know is that when my dad and stepmom decided to get married on our trip, they were thinking we would all just go to the Grand Canyon and then we’d find a pretty place and then my stepbrother (who is an experienced Dude Who Can Perform Marriages, Ordained By The Internet) would do a quick ceremony and we’d all continue on our hike or whatever. Apparently the last time they were there, they saw a couple being married there and thought it would be picturesque. Nice idea, yes?

Well, it turns out that if you want to get married at the Canyon, you need to get a PERMIT. And you have to pay for it, and they have all kinds of rules, and so it was decided in the name of Not Being Complicated that we would simply visit the Canyon, but have the wedding here at the rental house (which is plenty picturesque, too).

So. We all descended on the area on Saturday, went to the Grand Canyon on Sunday (so that we could see the solar eclipse from there), and planned to have the wedding early Monday afternoon. That would work out just fine, because Dad and Stepmom still needed to get a marriage license, and that meant we couldn’t have the wedding on Sunday, anyway.

“We’ll just run out and get the license in the morning,” my dad said, “and then we can have the ceremony after lunch.”

Breakfast on Monday was a veritable banquet; my brother’s girlfriend cooked a whole ton of food for everyone, and it was delicious. Most of the meal was spent with very little talking, as everyone was busy eating. But at one point, Otto asked my folks if they’d brought their divorce decrees with them. Of course they hadn’t, because really, it’s hard enough to pack for a trip when you can only have 3 ounces of shampoo, and by the way, who carries around a divorce decree?? But he was making a valid point—when we’d applied for our marriage license, I’d needed a copy of mine in order to get it. States set their own rules, though, and we were assured that Arizona doesn’t require that.

We finished eating, cleaned up, and then everyone dispersed to do various things (shower, etc.). Finally my father announced that they were leaving to get their license! And my brother and his girlfriend were taking them to the courthouse. I said “Have a good time!” and then went back to whatever it was I was doing (probably trying to stuff Gerber into my mouth and swallow him whole, because he is delicious).

About 45 minutes later, my cell phone rang. It was my brother, which was weird, because we almost never talk on the phone, and I’d just seen him, anyway.

“I finally got someone on the phone, hang on,” I heard him say, not directly into the phone. “Hey,” he said, presumably to me.

“Everything okay?” I asked, already knowing something was not, and wondering how awful it was going to be if it turned out that they couldn’t get their marriage license because they lacked some piece of paperwork (divorce decree!) or something else.

“Not really,” he said. My brother is a man of few words. I am fairly accustomed to pulling information out of him, but I felt a small twinge of annoyance at this.

“Well, we were driving down the highway, and some guy decided to turn left in front of us. I mean, he was in the other lane. And then he turned, and there wasn’t any time to stop.”

“Wait. What??” I must’ve raised my voice, because Otto and my stepbrother and his wife—we’d all been sitting around here—all turned to look at me. “Are you OKAY?”

“Well, the car is totalled,” he continued.

“ARE YOU OKAY? Is everyone else okay??” I was still waiting for the punchline. Surprise, no car accident! But you need a notarized divorce decree for your license! Or… no car accident, but the courthouse burned down!

“Uhhh, well, the EMTs are here. We’re okay, I think, but we’re going to need to go to the hospital.”

The rest of the conversation (not that there was a lot) is a little hazy, but Otto and my stepbrother were dispatched to the scene, and the next four hours were spent texting back and forth with Otto to get updates.

Let me pause here to say that my brother had a Subaru, and I had a Subaru back when I had my awful crash, and I would like to give a shout-out to Subaru for doing a phenomenal job creating a car that yes, crumples up like an accordion on impact, but mostly keeps the people inside in one piece when that happens.

My brother’s girlfriend got the worst of it, it seemed, with a broken finger at the end of a very banged-up arm, as well as bruised ribs and other assorted bumps and bruises. My brother insisted he was fine (though the next day it became apparent he was HELLO, not fine, and a trip back to the hospital revealed he’s rocking a concussion), my father said he was “a little sore,” and my stepmom got some nasty whiplash to go with her bumps and bruises.

I was at home with the kids and my stepbrother’s wife and kids and we tried to keep the little ones entertained while waiting for texts and discussing in hushed voices whether or not they’d still want to do the wedding that day. Surely not. But once everyone was discharged from the ER, I got one more text from Otto: “Heading to the courthouse. Everyone has been cleared.”

They arrived home shortly thereafter, moving rather slow, looking a little worse for wear, and it was very hard not to hug everyone extra-hard, seeing as how we didn’t want to make the hurty parts hurt even more.

So did they want to proceed that same day? They did. It could’ve been worse, you know… so much worse, and no one said how much worse, but we were all thinking it. Dad looked around, looked at his watch, and said, “Well, what if we do it at about 5?”

It was a lovely wedding. If you need an Internet Ordained Guy to marry you, I highly recommend my stepbrother—he does a hell of a ceremony. My stepmom looked radiant and my dad… well, after the ceremony we came inside to open a bottle of champagne. I think my dad is pretty much the working definition of joy in the moment, no? 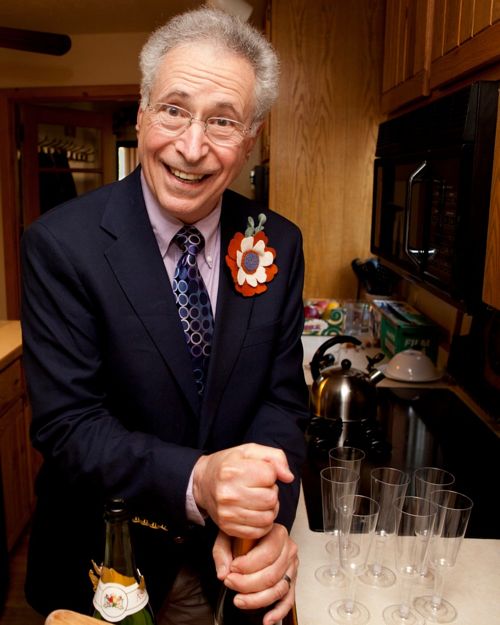 Dad also announced that he was certain their marriage would be smooth sailing, as it had already been “pre-disastered.” Y’all, I don’t think that man’s glass is half full… I think it’s always full. Impossibly so.

So my folks are finally legal, and a lot of painkillers are being consumed here. And for the record, I thought their relationship was a great object lesson to all of us even BEFORE they nearly got killed and then dusted themselves off and had their wedding anyway. Now I know they’re both complete badasses.

And JUST TO BE PERFECTLY CLEAR, I made sure to 1) congratulate the happy couple, 2) tell them that I love them, and 3) point out that while I appreciate the blog fodder, if nothing this “exciting” ever happened again that would really be perfectly okay by me.