After eight years of babbling about my innermost feelings online, I’ve learned a lot of things. Mostly I’ve learned that you’d much rather we talk about my hair than my angst. (I’m trying not to take it personally.)

People who know me in real life (a.k.a. Friendship Outside The Shiny Box) generally fell into two camps after I wrote about my hair last month: The first group read that post, called me up to say, “Really? REALLY?” and then forgot about it, while the second group called me up to lobby their specific preference and then came back a time or two (or twelve) over the next few weeks to see what I’d decided. The latter group tickled me endlessly because 1) it’s just hair, 2) it’s not even YOUR hair, and 3) I just can’t get that invested in the process because IT’S JUST HAIR.

And yet, a decision was made, and an appointment was made, but then there was radio silence because I’m a selfish monster. Or because my stylist didn’t have an opening for several weeks. And also because I was sort of tired of talking about it. (See also: JUST. HAIR.) But because I know y’all care deeply, let’s talk about it some more!

Here I have to pause a moment, by the way, to say that the most amusing comment I received on my hair post at Off Our Chests was someone anonymous who said:

DO NOT GO GRAY. I canâ€™t think of anything that ages a woman faster. donâ€™t get lazy, please please please donâ€™t be one of those women who gives up. Gray does NOT look natural or beautiful, it looks OLD and you have a wonderful husband who does not want you to look OLD.

On the one hand, a person who comments anonymously like that makes me sad because it’s clear to me that Anonymous’ mother didn’t love him/her (kidding! mostly!); but on the other hand, Otto and I got a ton of humor mileage out of that particular gem. I believe at one point he said something about how the day I start making these decisions based upon some perceived preference of his for me to look eternally 25 is the day I should either get back in the kitchen and bake him a pie OR smack myself until I wake up from that nightmare, he can never remember which. (Because I was taking that discussion very seriously, I believe I nodded, thanked him, and said, “Mmmmmm… pie!”)

You know what? I dyed my hair for a really long time. And I loved how it looked. I don’t regret it at all. But I’ve reached a place where I’m comfortable being gray, because… I am. I don’t know why, exactly, or what changed, but I’m about 50% gray now and after 6 months of letting those roots grow longer and longer, I was totally, utterly, completely at peace with my hair color. Sorry, Anonymous! I don’t call that “giving up,” I call that “being comfortable with myself.” I guess that makes me some sort of slacker.

So the issue, for me, really wasn’t about the color (other than what other people like my pal Anonymous might think about it, though I did have a wee bit of worry about it potentially having some career impact, because there’s plenty of people with deeply held beliefs about What Things Mean out there), but the length. There’s no good way to “embrace the gray” when your hair is long other than to just cut out the color and move on from there. Someone here (I can’t remember who, but I’m sure you’re very pretty) sent me a link to a blog done by a woman who chronicled her gray grow-out without going short, and yeah, she just had two-tone hair for a long time, and I applaud her for being comfortable with that, but I just wasn’t. My hair was kind of a hot mess and I just wanted it DONE.

Basically, I wanted the color resolved MORE than I wanted to keep it long.

So I made the appointment and waited impatiently and finally the day arrived.

Chickadee went with me to virtually hold my hand. (Well, that’s what she said. Personally, I think—even though she’s gotten over the shock and says she likes it, now—she just wanted revenge for her own short haircut.) We had to wait at the salon while my stylist finished up with another client, and by the time she put me in the chair I was actually feeling a little nervous.

“What are we doing today?” she asked. “Same as always?”

I took a deep breath. “Nope! I’m done coloring. Cut it off.” Her eyes widened for a moment, then she nodded. We briefly discussed my concerns—mostly that I really didn’t want to end up looking like somebody’s grandmother with her perm and sensible short cut—and then she got to work.

As I detailed yesterday over at Cornered Office, the cut was rather surreal. I forget, sometimes, how much freakin’ hair I have. It felt like she cut and cut and cut and kept cutting and the hair-drifts on the floor got deeper and deeper and STILL I WAS NOT BALD. Also (as you can see from the pic over there), clearing out the massive amounts of still-dyed hair made my gray pattern much more evident, and I’ve discovered that I’m a lot more gray in the back (like, from the crown of my head backwards) than I am right in the front. That was a happy discovery; depending on the lightning and the angle, I still look not-terribly-gray from the front. 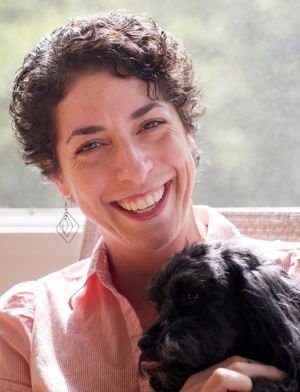 It’s fine. I mean, I think she did a great job. I also think that after 40 years of having curly hair I should not always be so damn surprised by how curly my hair is, but I think a lot of things that aren’t actually true. So of course I’m having a lot of the HOLY CRAP MY HAIR IS ALL POODLEY kind of thing, in spite of myself.

I mean, I appreciate Otto taking this picture out on the porch, but then I look at it and think, “Wow, I actually look more poodley than THE ACTUAL POODLE in this picture.” (Granted, she’s only half poodle, and I am… well, I’m probably all poodle.)

People have generally been very complimentary. On the other hand, I went to a meeting yesterday where I was greeted by someone I hadn’t seen for a while with, “What prompted this?” along with a hand gesture indicating my hair. That… did not exactly feel like positive affirmation. Heh.

I haven’t decided if I’m keeping it short, yet. It’s about to start mimicking the surface of the sun, ’round here, and I think I’ll appreciate spending the summer with a lighter head. Come fall, I dunno. Maybe I’ll get used to the ease of this (because DAMN, I had forgotten how easy short hair is, having had a takes-four-hours-to-air-dry mop of hair for so long) and decide to keep it this way. Or maybe I’ll say, “Huh, I miss having it long” and grow it out again.