It’s true, we totally rock (updated with a pic)

You may remember that one piece of my recent weekend of doing pretty much nothing included a landscaping estimate. This is because my darling husband seems to believe that the outside of our house is supposed to look a certain way.

I’m not saying he’s wrong, I’m just saying I’m a lot better at, shall we say, selective visual fields than he is. Why, the weekend before the do-nothing weekend, Otto had declared a family yard pick-up day, and I’m not saying it didn’t look great when we were done, I’m just saying that this is a Mars/Venus issue.

What I think when I look at the front yard: Grass! Birds! Pretty!

What Otto thinks when he looks at the front yard: Maybe today we can pick up all of the sticks and branches that fell up by the big tree and then along the sides, there, and drag it all back into the debris pile in the woods. Then we can trim the bushes, rake all of the leaves and other crap out of the front beds, trim all of the greenery, weed, and spread new pine straw when that’s all done. And finally I’ll ride around on the mower for a while, because the grass has grown a full half an inch since the last time I did that.

(In my defense, I did pick up a LOT of sticks that day.)

Anyway, we have now lived in this house for almost five years, and every summer we have some version of the following conversation:

Him: We should decide how we want to landscape around the pool, here.
Me: Landscape? Like, intentional planting? Where the kids are just going to run through it and the fire ants are going to take up residence?
Him: It’s all weedy back here!
Me: So?
Him: It doesn’t look nice.
Me: Who’s looking?
Him: Right now I just come back here with the weed whacker every few weeks, but it makes a big mess and it just doesn’t look like we have a plan.
Me: We don’t.
Him: Exactly!
Me: And?
Him: OH NEVERMIND.

(Being married to me is a never-ending carnival of delight and circular conversations.)

I’m not saying that the people who owned the house before us didn’t have some sort of landscaping plan for the back, I’m just saying that five years of benign neglect later, I’ve got my vegetable planters set up back there and occasionally have weeds outside the boxes which are taller than my tomato plants. And while I mostly find this amusing, it is aesthetic anathema to the man who dreams of owning his own rototiller.

On the Team Otto side, we now have this gorgeous new fence and deck and it very nearly looks like we give a damn about our property, except that the pool area really does look like a small, neglected jungle. He is totally right that Something Needs To Be Done.

On the Team Mir side, we now have this gorgeous new fence and deck which we blithely paid for before 2012 blew up our world with its dire illnesses and weeks of child hospitalizations and me having all but stopped working in the new reality of Everyone Has Fifty Million Doctors Appointments (Possibly A Slight Exaggeration) Every Damn Week. Landscaping costs money. We are good with our money, but the reality is that we currently have a lot less of it than we used to.

So we compromised: We got an estimate on our agreed-upon plan, and it was too much, WAY WAY TOO MUCH, and I thought maybe we could just go another year with just weed-whacking the area and pretending that was okay.

But Otto has been very patient, you know. And it really does look terrible out there. So he went over The Plan again and made some phone calls and came up with Ye Olde Affordable Solution.

The Plan: retain the largish, intentional bush-like things in the pool area, but kill everything else and cover the area between the concrete pool deck and fence with landscaping fabric and then gravel. We can revisit planting Other Intentional Things in future years, but for now it will at least put an end to the weeds and look nice.

Because the landscapers wanted many thousands of dollars to make this happen for us, and because Otto figured out that we could purchase stone locally for just a few hundred dollars and then bribe the children to help and get it done ourselves, last week a big dump truck came to our house and left 14 tons (truth!) of river rocks in the driveway.

“This pile is smaller than I thought it’d be,” I commented to Otto. This would turn out to be somewhat ironic, because the reason the pile wasn’t as gihugic as I’d assumed it would be is because—and I don’t know if you know this—rocks are really heavy.

On Saturday we got up bright and early and went to the Farmer’s Market. This was another compromise; if Otto wanted me to shovel gravel all weekend, I wanted some really yummy tomatoes and locally-roasted coffee, first. (In retrospect I feel I should’ve asked for more. MUCH MORE.)

We came back home and rallied the children, and then, as one big happy family, we began project Whine A Lot Outside.

The kids helped with the weeding and the putting down/stapling of the fabric. After a while, enough fabric was down that it seemed like we could start bringing the rocks in. Otto offered to do it, but I am terrible with spatial relations, and he was fitting together pieces of landscaping fabric in the crazily-shaped spaces around the pool like he’d been doing it all his life, so I left him and the kids to that and I started shoveling rocks into the wheelbarrow and bringing loads inside the fence and dumping them and spreading them around.

Clearly this was going to take forever a while.

Once Otto and the kids got the rest of the fabric down, he took over on the wheelbarrow. I stayed inside the fence with my trusty rock rake (is that a thing? it’s totally a thing) and worked on making the rocks look pretty. I pushed them this way and that, and made sure they went up to the fence line over there and up to the concrete over here and around that tree trunk there. It was very slow going.

Finally it was time for me to go shower and leave to get my hair cut, so I tried to keep the glee out of my voice as I told Otto to have fun without me. He said he was going to take a “short break” and I encouraged him to just wait for me to get back to keep working. Otto is a workhorse, though, and by the time I returned (about twelve pounds of hair lighter), he’d really gotten a lot done.

I changed back into my work clothes and we kept at it until it started getting dark. The pile in the driveway had finally dwindled down to just a small mound, and Otto really wanted to just FINISH, but I persuaded him that we could finish the next day in no time.

That night we got take-out for dinner (much to the kids’ delight), mostly because neither of us could effectively lift our arms anymore. We enjoyed a romantic Saturday night of staring deep into each other’s eyes over a shared bottle of Aleve, murmuring sweet nothings such as “my blisters have blisters” and “I never should’ve sat down, I don’t think I can get up again.”

On Sunday, we got up and gobbled down the rest of the Aleve. Then Otto finished off the stone pile and I got my veggie boxes turned over and replanted, and by lunchtime we were able to sit down on the porch and look out over the pool area and admire our handiwork.

“I know I fought you on doing this,” I said, “but I have to say, you were right. It looks AMAZING. And even though I think I may be permanently crippled now, it was better than paying someone else.”

“I really like how it looks,” he agreed. “And I’m just glad it’s DONE, finally.”

We sat in the sun, in companionable silence, for a while.

“We still need someone to come trim those trees, though,” he finally added, pointing at the culprits.

It is a testament to our love that I didn’t immediately strangle him and wrap his body in landscaping fabric. Also, I figured we didn’t have enough rocks left to cover him.

THRILLING UPDATE!
Y’all started clamoring for a picture, so I hope you’re ready for this excitement. I tried to get the best angle for maximal appreciation of the wonder that is… the rocks. Please enjoy. 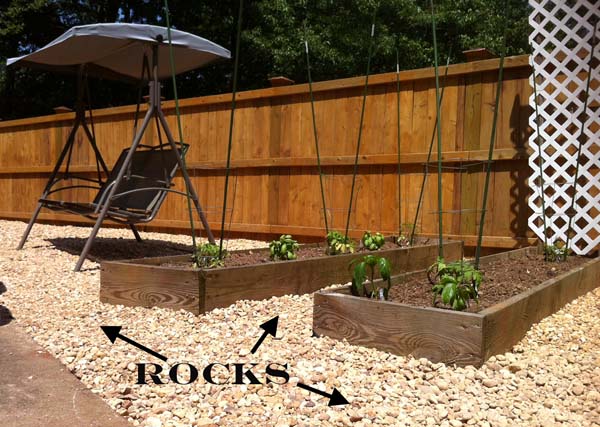