What I really, really want to do right now is go on a long and indignant rant about a particular teacher at the middle school. BUT I AM A GROWN UP. So I merely complained about it on Facebook, instead, and here I am going to talk about oatmeal. As adults do.

See how MATURE and RESTRAINED I am? Don’t be envious, it took me YEARS to become this refined.

Instead I am going to tell you about how this week Hippie School had a Medieval Festival, and we parents were treated to various delights including a swordplay tournament, dance demonstrations, and various other medieval things. And of course, we were tasked with providing various medieval foods. I agreed to bring “porridge,” which meant I brought a huge crock pot filled with steel-cut oats. Which no one ate. It turns out that—while porridge is medieval—so is roast chicken and apple pie, so, um, yeah.

So we had a lot of leftover oatmeal. Like, a gallon of it. Nom nom.

I cannot remember where I first learned to do this… I think it was via Cleaner Plate Club? But it turns out that you can fry oatmeal and it’s delicious. I’ve done it before, but not for a really long time. And now I have all this oatmeal, so this morning when Monkey and I got up (Chickadee had a football game last night and was still sleeping the sleep of the exhausted marching band geek) we decided that fried oatmeal was the way to go.

Ordinarily you could just store leftovers in something that makes a handy sliceable shape—a loaf pan works really well—but did I mention I have an industrial bucket full of the stuff? I do, so I hit upon the BRILLIANT and not at all OCD idea of using my ring molds to make perfect oatmeal circles on a piece of waxed paper. Shut up. 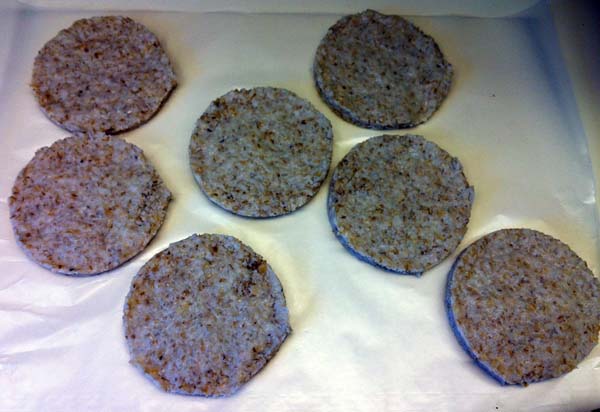 (Chickadee saw this picture on my monitor and said, “Ewwww, they look like moldy veggie burgers. Or rice cakes.” Thanks, kid!)

Then you heat up a frying pan and throw in a bunch of butter, because steel cut oats are incredibly healthy and we’re doing our best to drown out any possible fiber-riffic health benefits with a bunch of fat. Add your oatmeal pucks to the pan like so: 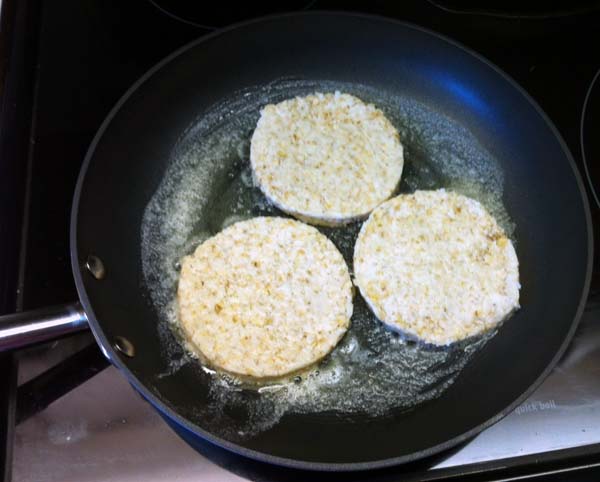 Stand around watching them and discussing with your son whether or not they’re ready to flip now. How about now? Now? I’m hungry, Mom, I think they’re ready. I’M STARVING! DYING! NEED! OATMEAL! PUCKS!!

When the whining becomes deafening, it’s time to flip them. 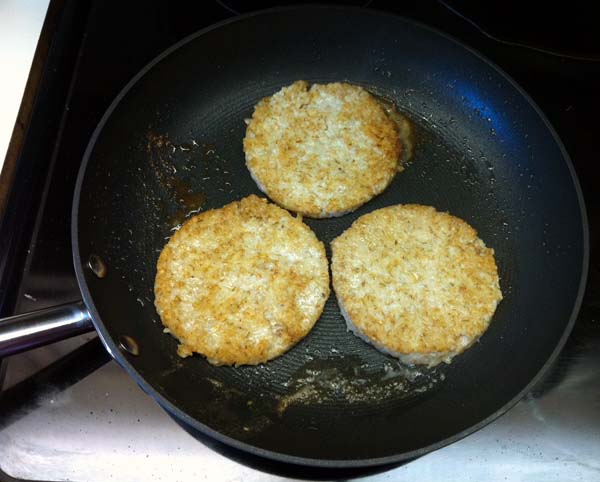 Admire the brown, buttery crispness that has now formed on your pucks. Mmmmmm.

Repeat previous step while cooking the second side, and when the whining reaches deafening this time, remove to a plate. Drizzle with maple syrup. REAL MAPLE SYRUP. Fake syrup is for people who hate America. 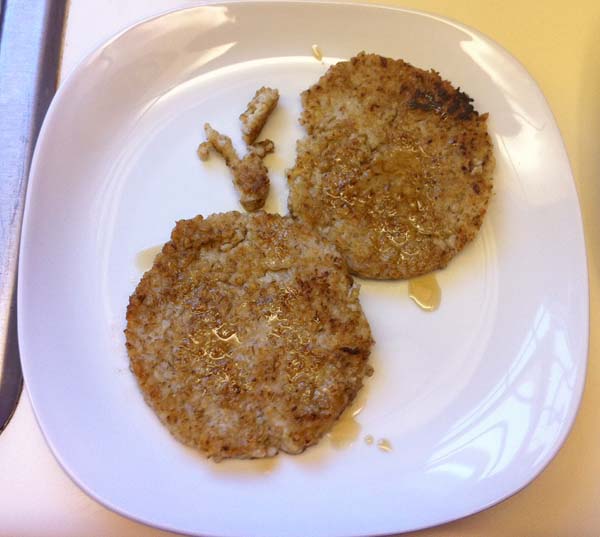 (Don’t worry about the little crunchy bits that fall off the pucks. Those are the most crispy and delicious.)

Then cook some more while your kid who “hates oatmeal” inhales the first couple, because he’s going to want seconds. Lovingly place a prepared plate at your daughter’s seat at the table and gently wake her up so that she can snarl at you and insist she’s not hungry, too. Try to resist the urge to butter her chair in retaliation, because you’re the grown-up.

I am the very model of decorum. And buttery goodness.