I think one of the things I love so much about having a dog is that I always know where I stand with her. Human relationships are complicated, messy things. Good intentions can get lost, overshadowed, and misinterpreted. Apologies can be hard to come by and sometimes even harder to really hear. And a bad day can sabotage years of carefully laid groundwork if you’re not lucky. Humans are HARD.

Dogs, on the other hand, are easy. Dogs have long but extremely forgiving memories. Dogs are all about your intentions RIGHT THIS SECOND and not so much about that unpleasant thing that happened before.

Plus, they’re easily bribed with food. (I guess this is also true of some humans. But not so much in my experience.) Y’all know I love Licorice to furry little bits, but she’s really not all that smart in the grand scheme of things. Smart for a dog? Absolutely. Smart compared to a human? Well, no. I mean, possibly smart compared to a human that likes to roll around in entrails in the woods, sure. But on average… no.

No amount of cheerfully proclaiming “Wanna go for a RIDE?” and taking her in the car to any variety of happy locations has broken Licorice of her abject terror when placed in the car. The only time she doesn’t completely flip out is when placed in the truck, in her crate, which she seems to realize means we’re going camping. (Though even then, she’s not exactly excited. She just seems reassured by the fact that we’re ALL there, like maybe if we’re on a death march, at least she gets to do it with her whole pack.) But put her in the car and she shakes, whines, and drools with fright.

It is rather pitiful.

And woe unto me if said drive ends at either the vet’s office or the groomer, because then she casts her baleful glare my way as if to say, “You spent the whole ride telling me everything was okay! IT IS NOT OKAY!”

Guess where we went this morning? Awww, but who doesn’t want to go for a terrifying car ride and then get put inside a giant sink? COME ON!

As the groomer peeled Licorice out of my arms, MAH PRESHUS BAYBEE had her tail tucked under, was still shaking, and her eyes said YOU ARE THE MEANEST PERSON EVER.

But the thing is, when I came back to pick her up? It was all forgotten. I stuck my head into the cage area and called her name, and she was immediately on her feet, tail wagging, nothing but delighted to see me. Once out, she leapt and ran in circles around my feet and leapt again and again. “YOU CAME BACK! YOU LOVE ME! YOU REALLY, REALLY LOVE ME!”

I paid and took her out to the car. She never shakes on the way home; she knows the Bad Part is over and everything’s okay, now. She just sits there, looking around, occasionally leaning over to lick my arm, reassuring me that she knows everything’s good and I would never hurt her. 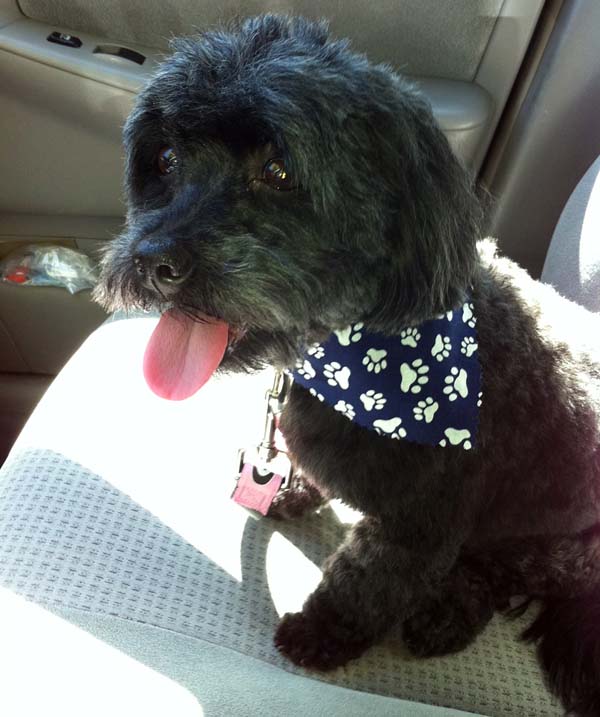 Or maybe she just knows there’s a new squeaky toy in it for her when we get home. Whatever. I appreciate that despite the fact that she would be perfectly happy to smell like squirrel guts and have puppy-dreadlocks, she endures and doesn’t hold it against me.