We have already discussed the fact that Licorice appears to suffer from PTSD (Post Traumatic Suitcase Disorder), wherein the very sight of packing sends her into a neurotic tizzy. So it was no surprise when the whirlwind of pack-up-the-camper activity on Saturday found her alternately pacing the house and hiding under furniture. That was to be expected.

What was slightly less expected was when we finally strapped her crate into the truck and took off on Sunday… and she proceeded to cry and whine for the entire first hour. In desperation, we stopped and walked her a bit—maybe she just had to poop, rather than that she was just being a pain in the ass—but back in the truck she continued to whimper and shiver and generally be pitiful. That was no problem at all, because it was only about a 6-hour drive to our destination. ACK.

After another fifteen minutes or so, she resigned herself to her fate and lay down, quietly. She continued to shoot martyred glares at us, periodically, but the rest of the drive was uneventful.

The good news is that Myrtle Beach is simply lovely this time of year, and has the additional advantage over some other beaches of not, you know, being covered in oil. The bad news is that space here is at a premium, so while we are at a perfectly nice campground, we are slotted into a little space along with a hundred other camper-sardines, and most of them brought their dogs, too. (We have noticed quite a lot of other Shih Tzus, in fact, which leads us to believe that Shih Tzus are known for their adaptable camping abilities. Alternatively—and this is the theory I’m currently favoring—they are just generally so damn cute you have difficulty getting angry at them even when you take your Shih Tzu on a quick walk and she decides that it makes sense to full-on ferocious bark/lunge at a couple of dogs five times her size. Just being theoretical here, of course. Ahem.)

So we have this lovely little campsite, and we have a little porch-thingie under some trees, on the water, and despite the fact that it’s about 90 degrees in the shade, there’s a never-ending supply of wind to keep things tolerable. It makes dinner a little interesting (“Sit on your napkin! SIT ON YOUR NAPKIN!”), but that’s the price you pay when you’re communing with nature, man.

We got here, and we got set up—that’s a bit of an intricate dance, in itself, when you’re planning to spend a week living in about 160 square feet with four people and a dog—and we commenced sitting on our little porch and telling Licorice to hush up every time she felt the need to announce that HEYTHERE’SANOTHERDOG!! And then it was time to have dinner, and after that we decided to take a walk down to the beach.

The walk to the beach itself is kind of interesting, because I’d have to say that the route there is somewhat less than pedestrian-friendly. I was already thinking that BEFORE we came upon the squashed cat that someone had thoughtfully tossed back onto the sidewalk after running it over. (Licorice: OHMYGODGIANTSNACKS! RIGHTHERE!) In a couple of places you have to cross kind of a busy street where there’s no traffic light, so that was fun. But eventually we made it. Beach! As far as the eye could see.

Now, it’s true that Licorice views our pool as an instrument of torture. We knew this was likely due to 1) the chlorine and 2) the lack of a way for her to ease herself in (even the first step puts her in up to her chin), but still, we weren’t entirely sure that Licorice would enjoy the water.

And do you know what is a SUPER EXCELLENT idea when heading to the beach to live in a small box with your family for a week? Taking your dog down to the water on the very first night, and finding out that actually, she totally loves the beach.

I had to coax her down to the water line, the first time. She seemed perplexed by the dry sand, but enjoyed the wet sand… and then a little wave lapped up and doused her legs. She looked around, ready to glare at whoever’d done that… but then realized that hey, that was kind of fun. The kids and I took turns running in and out of the surf with her as she became progressively wetter and more hyped up and into the game. And of course, as we’d only been planning to “take a quick walk,” we were soon all completely soaked to the knees, and then to the waist, but nobody cared because we were all laughing too hard.

I wanted to crop myself out of the following pictures, because I’m sure a less flattering shot of me exists, somewhere, but I don’t know where, and also I made Otto endure a prolonged “I look so fat! My hair looks like Buckwheat’s!” whine about it, but he insisted that it’s fine, I’m soaked and running and the point is not how I look but that it conveys motion. Or something. The POINT, really, is that Licorice is dangerously close to becoming airborne with the power of ZOMGWATER!!11!!! here: 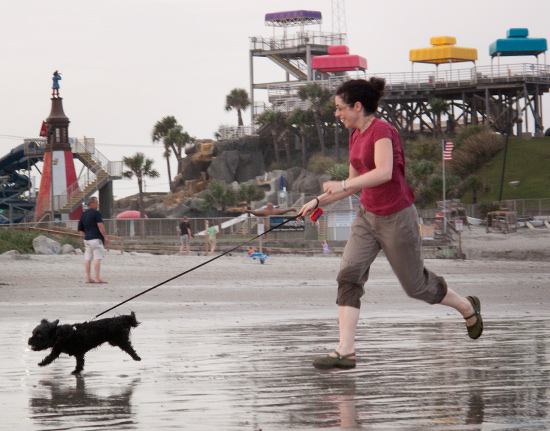 (Please note: I only wear Crocs in my garden and while camping. And as long as my pockets full of Monkey’s found shells and my beach-running hair render me this lovely, I have no idea why the thing I feel compelled to explain is my FOOTWEAR, but I do. So.)

We raced up and down the beach until I could barely breathe, and then Licorice pranced along greeting everyone who showed any interest in her at all, which was everyone except one sourpuss of a woman who kept glaring at us as if we had a crocodile on a leash, and said animal had just taken a dump on her foot. Seriously, who could not love this dog? 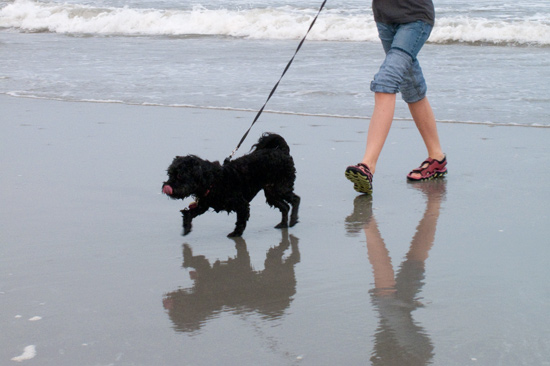 Finally we were all exhausted, and we walked back to the campground and hosed everyone down, and after sitting out on the porch long enough to air-dry, we came inside and went to bed. And by “went to bed” I mean the dog cried in her crate until we let her get into bed with us, because we are suckers.

In short, it’s pretty much the greatest trip ever so far.