We are more than halfway through the Summer of Pitching In, and have met with varying levels of success on that particular front. Someone—and I am not naming any names, but it is someone who lives here—has not been so much a fan of the whole “helping out” concept. That particular someone has participated very grudgingly, and appears to expect a ticker-tape parade in celebration of every semi-useful activity said person deigns to commit. (Said person has been extremely disappointed by our reaction to said “helpfulness.”)

And then there is Monkey. Monkey is the kind of kid who would happily give you the shirt off his back. (Heck, he’d give you his pants, too, if you weren’t there covering your eyes and yelling “DUDE! PUT YOUR PANTS BACK ON!”) The Summer of Pitching In is just his speed, because he has little difficulty discerning how to help, and helping is His Thing. He loves nothing more than to make life easier for those around him when he can, possibly because he is all too aware of ways in which he (unintentionally) sometimes makes things harder.

If I asked Monkey to scrub the floor with a toothbrush, I’m pretty sure he’d only pause long enough to ask 1) what kind of soap to use and 2) if it was okay to use his sister’s toothbrush before getting to work.

Thanks to a recent growth spurt, Monkey is now tall enough to reach just about every cabinet shelf necessary to reach in order to put away all the dishes. Armed with this new height and his perpetual desire to help, Monkey has become the self-appointed King of the Dishwasher.

On any given morning all I have to do is say, “Hey, buddy? Could you unload the dishwasher for me?” and he’s on it. Then when he’s done he reloads it, clearly convinced I’m going to be TOTALLY SURPRISED, as if he doesn’t always do that, but you know, I only asked him to UNload. So.

But the best part is that I can sit here in my office, off the kitchen, and it’s like being sucked into a Vaudeville routine, every time. Monkey doesn’t just do the dishes. He extends a running commentary peppered with observations and questions while he does it.

Him: This is a barbecue tool. It goes in the far drawer.
Me: Okay.
Him: Or maybe I should just take it outside and stick it in the grill!
Me: Good idea! But no.
Him: Is this a spatula that goes in the thing or in the drawer?
Me: The drawer.
Him: Why does this Pyrex thing not go in the same cabinet with the other Pyrex stuff?
Me: I don’t know. Because we’re weird?
Him: Probably.
Me: Sorry.
Him: Sokay. I’ve almost got everything out! Just a few more cups!
Me: You’re awesome. You rock the dishwasher!
Him: I’m the greatest!
Him: And modest, too. Don’t forget that.
Him: Hey, this knife smells like peanut butter.
Me: Hey! I bet that’s because someone used it in peanut butter!
Him: Hey! I bet you’re right!
Me: Go figure!
Him: Hey! This mug smells like coffee!
Me: Hey! I bet I had some coffee in it!
Him: Hey! THIS mug smells like peanut butter AND coffee!
Me: Hey! I bet I had… wait a minute.
Him: Haha! I got you!
Me: Indeed.
Him: Hey Apple!
Me: Hahahaha. NO.
Him: Hey Mom! Hey Mom! Hey Mama!
Me: Yeeeeeeeeesssss?
Him: I’m all done. I am awesome, and now I need to give you a hug. 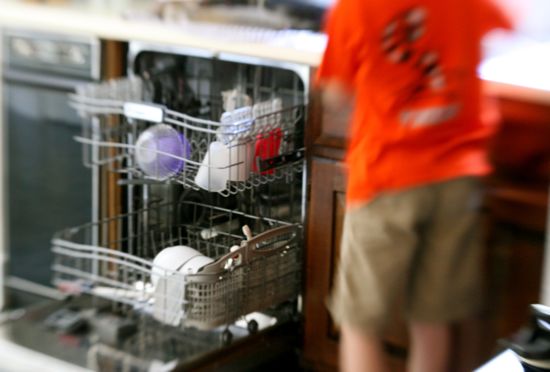 [It also bears reporting that when I snuck around the corner for this picture, Monkey turned around when he heard the camera and said, “Why are you taking a picture of the DISHWASHER??” Poor dumb Mom, always doing unfathomable things. Thank goodness I have him here to keep me from hurting myself with my wacky ways.]

Happy Love Thursday, everyone. Here’s to the simple routines that never fail to remind you how sweet life can be.