Look; it’s not her fault that three of us are on Prednisone. Otto and I are barely sleeping, though at the same time we’re too tired to be coherent, and as a result we’re perhaps not giving her the quality time she deserves. Chickadee isn’t quite as irritable as I remember her being from the steroids in the past, and of course her sudden appetite increase is working out well for the dog, so I guess that’s good. (“Can I have an apple? Can I have another apple? Can I give the dog a piece of this apple?”) And the fact that Monkey woke up this morning with conjunctivitis was just the icing on the crap cake for the REST of us, but when he went to pet the dog and I yelled at him to GO WASH HIS HANDS, FOR THE LOVAGOD, Licorice seemed kind of bewildered.

But none of that is actually why I feel bad for the dog.

I feel bad for the dog because she’s COMPLETELY LOST HER MIND.

My office is pretty spacious; I spend most of the day in here working, and I’m lucky enough to have enough space for my desk and bookcases and filing cabinet and even a futon couch which Licorice has more or less claimed as her toy storage area. On any given day, I sit at my desk and work, and Licorice runs from one end of the futon to the other, tossing a tennis ball for herself, until she gets tired and flops down for a long nap.

If it’s a hot day or she’s feeling a little clingy, she’ll come nap on the floor under my desk, instead. (It’s a dog’s life, man!)

At least, this is what she’s always done in the past.

Two days ago, Licorice… changed. Licorice became obsessed with the bathroom in my office.

Now, the bathroom in my office is pretty unremarkable. For one thing, it’s tiny. For another, I don’t know that she’d ever even noticed it was there before. Her crate is tucked into a corner over by the bathroom door, and we keep the bathroom door mostly closed so that it doesn’t block her crate.

But two days ago Licorice went into the bathroom and refused to come out when I called her. She sniffed all around in there and tried to stuff her snout down the air vent and poked her paws into the corners and WHINED.

We found one of her tennis balls in there, wedged behind the toilet, so we figured extracting that would be the end of it. Except that it wasn’t. Yesterday was more of the same, with her scratching and sniffing and crying and generally acting like YOU GUYS, COME ON, THE BATHROOM IS HAUNTED!!!

“We must have a mouse or something,” I said to Otto. “She smells SOMETHING in there.” Otto promised to take a closer look, but really, there’s no evidence that there’s been anything in there. We started pulling the door all the way shut to keep her out of there, but she’s utterly obsessed.

This morning I went in there and shut the door and she sat outside the door crying, and then I heard it. A scratching. Under the floor. Turns out, there’s nothing IN the bathroom; there must be a squirrel or something in the crawlspace UNDER the bathroom. She’s been able to hear it all this time and has been wondering what’s wrong with us that we can’t.

So. The question now becomes, do we try to oust whatever’s taken up residence under the floor, or do we just come to terms with this being all we ever see of the dog anymore? 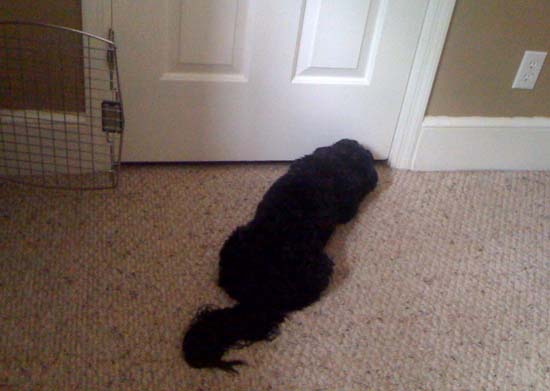 She’s been like that for TWO DAYS. She won’t even snuggle on the couch with us at night when we watch TV. It’s kind of pitiful.

Once, a million years ago, when I was still married to my ex and we had the world’s spazziest dog, he (the dog, not my ex) became obsessed with the wood stove in our basement. After a couple of days we figured out there was a squirrel stuck in there, and my ex and a neighbor managed to lure it out into the dog’s crate and take it out to the woods to free it. I am forever scarred by the sight of that incredibly pissed-off squirrel hissing at us from inside the crate while the dog lost his ever lovin’ mind howling at it.

I’m not sure I can handle another squirrel extraction, people.

But I do miss seeing Licorice’s FACE.