Chickadee is taking Licorice through the same training class I did with her when we first brought her home. This is good for Licorice (more training) and good for Chickadee (more responsibility) but slightly inconvenient for me and Otto (have to take her to a two-hour class every week) and downright annoying for Monkey (with Chickadee now asserting dominance over the dog, Monkey is the last low puppy on the pack totem pole). Nevertheless, on the whole we think it’s a good thing.

Licorice is a completely different dog than the one we met all those months ago; she seems to enjoy class, now, whereas when I was doing training with her she often seemed to feel she was being punished or tortured by having to spend time with those other dogs. Also, we had days back then when she didn’t seem to understand what I wanted her to do. Now, she completely understands what Chickadee wants her to do… and often does the canine equivalent of thumbing her nose at her and singing, “Make me!”

Not that I enjoy watching my daughter deal with The Stubborn, or anything. Oh no. AHAHAHAHAHAHAAAAAAAhem.

F’rinstance: I used to take her to class and train her with a bag of mostly kibble, with a couple of bits of cheese thrown in for extra incentive. Now Licorice has decided that she only works for pepperoni. I SWEAR. Chickadee rewards her with a piece of kibble and Licorice looks at it hit the floor and then looks up at her like, “Yeah, no.” Then she lays down on Chickadee’s feet and refuses to comply again until she gets a treat she deems worthy.

The best part, of course, is that she knows she’s completely adorable while she’s being a pain in the ass. 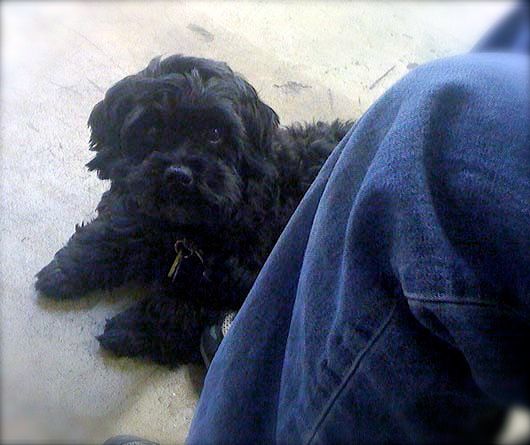 Cough up the pepperoni, bitch. You can’t say no to this face.

Chickadee is the youngest handler in the class and desperately wants to do well, lest she appear to, I don’t know, be a child or something. (THE HORROR!) So last week when it was announced that it was time to start thinking about what trick to teach your dog, she became utterly paralyzed with indecision.

Getting your dog to do a new trick is part of the “final exam.” I taught Licorice to roll over, when I took the class, and it took forever and for a while I thought she’d never get it. Now rolling over is a standard part of her “obedience seizure” (otherwise known as YOU HAVE SOMETHING I WANT I WANT I WANT IT I WILL DO ALL MY TRICKS AT ONCE, SEE, HERE I AM FLOPPING AROUND ON THE FLOOR LIKE A BEACHED FISH, I ROLLED OVER TWELVE TIMES GIMME GIMME GIVEITTOMENOW).

Chickadee wants the “perfect” trick to teach Licorice over the next few weeks. Just as soon as she figures out what that might be.

We’re open to suggestions on the best trick to teach her. Licorice is small and agile and likes long walks on the beach and romantic candlelit dinners pretty smart, so it can be something a little harder than the norm, but we’re not going to try to get her to bake a meatloaf, or anything.

What’s the funniest or cutest doggie trick you know?