Love soaks up the sun

I spent most of yesterday feeling very sorry for myself, and have a good head start on doing more of the same, today.

My neck is out. This used to happen with a fair amount of regularity, but it hasn’t happened in a long time. I think I thought I was “over” it; that whatever was injured in that long-ago car accident had finally been healed or at least cracked into submission by the chiropractor. And here as I stand on the brink of what is perhaps the healthiest period of my life—I am eating a high protein, low fat, mostly fresh, antioxidant-rich diet, and exercising daily for the first time since my childhood—I managed to wake up yesterday morning almost unable to move.

When I commented that “this sucks” to Otto, Chickadee wagged her finger at me and told me to “find a nicer word,” and I told her that I most certainly would not, because it DOES suck. Winning parental moment, right there. I am a role model for the ages, no?

Luckily I was able to get in with my chiropractor towards the end of the day, and I had visions of immediate relief. Well, okay, there was a TINY bit of immediate relief, but then I reasoned that SURELY today I would wake up much better. And that didn’t happen, either. Sometimes it takes more time, I guess.

“This is so unfair,” I groused, as I was poked and prodded and gently untwisted. “I didn’t even DO anything. What happened?”

“Well,” replied the wise doctor. “I often find something like this can be brought on by fighting off sickness, or by stress or another big emotional change.

And it’s true. I’m eating right and exercising and even getting enough sleep. Monkey has been a different kid at school, lately, and happy and cooperative here at home. Chickadee just found out she’s moving up to the next level of the Science Fair and continues to love and rock her new short-haired self. Otto is unflappable, as always.

My office is another story. Right now the new desk is set up, but we haven’t yet removed the old one, which means we haven’t rearranged everything else, which means that there are things like bookcases sitting in the middle of the room. Fancy. Once I’m fully mobile again, I’ll get things moved around and finished. In the meantime, though, I’m enjoying my new post right here by the window.

In fact, I moved this poor plant in here with me. Otto bought this plant shortly after we moved into the house, and I’ve put it in a few different places and utterly neglected it for most of its life, and basically it tries to die and then I notice and go OH NO, DON’T DO THAT and move it somewhere else, where it generally rallies slightly before trying to die again. Before I put it on my desk it was next to the kitchen sink, where it finally seemed to be getting the sunlight it wanted, but also was constantly being smacked with pots and pans and debris. Whoops.

So I brought it in here and the first couple of days it seemed like it was getting ready to croak again. I could practically hear its wee, feeble little plant voice protesting, “The sun! It BURNS!” But now it’s standing straight up, sprouting new growth, and generally looking like a plant that may indeed thrive under the right circumstances. 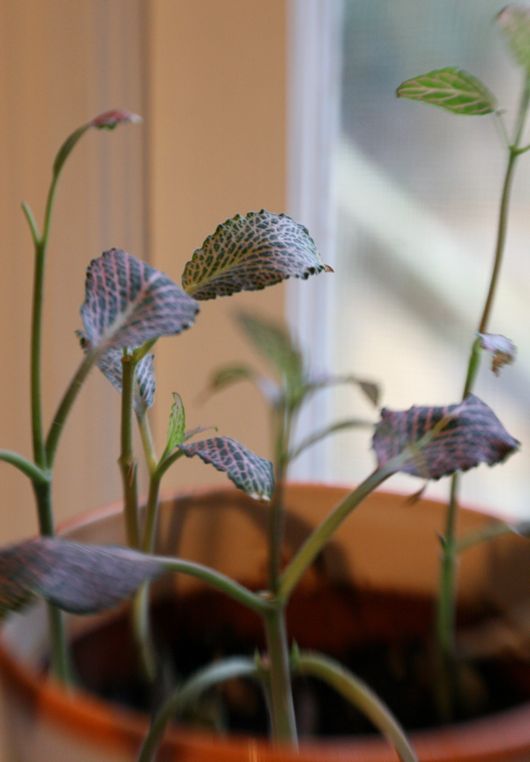 I bet my neck will feel better tomorrow. And that at some point, I’ll be able to take a lesson from my plant, here, and just enjoy the good stuff.