I used to say that everything I ever needed to know about having good self esteem, I learned from my son when he was not yet 5. His continual belief that he was, in fact, all that and a bag of chips AS WELL AS a chocolate milkshake and TWO cookies, has long since been the stuff of family legends. And while Monkey’s particular road has been a little bumpy of late, his essential belief that he rocks seems to be inborn.

Chickadee, on the other hand, is more delicate. Part of it, I’m sure, is that she’s a girl and girls are relentlessly cruel to one another in a way boys seem far too busy rolling around in the mud together to bother with. Another part of it is simply that she’s of a different constitution; it has always mattered to her that others affirm her worth, her beauty, her purpose.

This makes my heart ache for her. The world is a harsh place for those who need reassurance from without rather than finding it from within. I know this because I used to be the same way, and it’s taken me half a lifetime to thicken up my skin. While I won’t deny that it “builds character,” it’s not the sort of thing I ever would’ve wished on my child.

Throughout her life, I’ve tried to find the balance with her. I want to affirm her without being the gatekeeper of her worth. I struggle to correct her, when necessary, without that disapproval stinging her to the core. We butt heads constantly, as mothers and daughters do, and as two stubborn people do, and always in the back of my mind is a faint refrain of, “Gently, gently.”

And it can be very, very hard to be gentle when the object of your wrath is a tween doing a perfect impression of a spoiled, disrespectful brat. I’m just saying.

Middle school has had its ups and downs. At the same time that Chickadee’s attitude at home has often taken a nosedive, so too have I been able to see that she’s struggling with finding her place and her purpose and what makes her feel like she belongs. And then—oh, the many joys of being Mama!—I’m stuck in the unenviable position of knowing her behavior stems from other issues, real and painful issues, but I still have to correct the unacceptable… casting myself firmly into the Mean and Awful No One Loves Me camp of the damned.

Now, it’s true that I’m a pretty strict parent. I expect a lot from my children. On the other hand, I’m a HUGE believer in picking your battles, which is why some things are completely irrelevant to me. Hair? I can’t get worked up about hair. If Monkey wants long hair, he can have it. He has to keep it clean and combed, but other than that, who cares? Similarly, I’ve let Chickadee dye a streak of her hair, because it’s JUST HAIR.

And when Chickadee started begging for short hair—really short hair—my concern was only that she would regret it. Hair grows, but what she was asking for was a good year’s growth off from what she currently had. So we agreed to compromise, and I cut her hair shortER, but not as short as she’d originally wanted to go. It, uh, didn’t go as well as I’d hoped. I mean, we all thought she looked great, but she was unhappy.

And so she came back, a week later, insisting that she still REALLY wanted what she’d ORIGINALLY asked for—a genuine pixie, super-short all over, and she was sure that was what she wanted and would I PLEASE PLEASE PLEASE cut it.

None of your friends have short hair, I reminded her. You’re the kid who wants to jump off the bridge when all of your friends are doing it. You’re talking about something RADICALLY different. Are you sure?

I don’t care, she said. This is what I want. I think it’s pretty. I think I’ll love it.

Visions of months upon months of tearful grow-outs danced in my head. I’m just not sure you understand how drastic this is, I tried again.

Yes I do, she said. Mom, you always say it’s just hair. IT’S JUST HAIR. This is what I want. Please?

And in the back of my head, I heard “Gently, gently” followed by “Let her have this.” 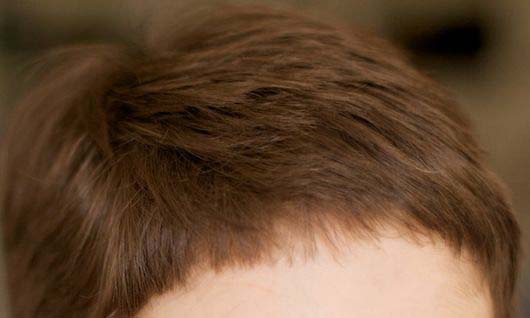 She LOVES it. She’s carrying herself differently, I think… maybe with just a little more confidence, a tiny bit of a “here I am” swagger. As she headed off to school today after the long weekend, I asked her how she thought her friends would react.

I wanted to tell her how proud I am of her, how beautiful she is—inside and out—and how she continues to surprise and delight me as she grows into a young woman, but I had to settle for handing her her lunch bag and telling her to have a good day.