And now it can be summer

(Nope, I don’t think I will ever get used to it. That’s some craziness, right there.)

When we did the big closet clean-out a few weeks ago, we took a load of the kids’ outgrown clothes to our local consignment shop, and picked up a few new things. Amongst them was a smocked sundress for Chickadee, suitable for Georgia summer, but completely UNsuitable for the 50- and 60-degree weather we were having at the time. She has asked to wear that damn dress every single day since we bought it. Yesterday I checked the forecast and she said, “NOW can I wear my new dress tomorrow??” I said sure, and now I’m the greatest person in the whole wide world. (Until I do something that offends her, of course. I’ve got that scheduled for about five minutes after the kids get home from school today. I figured I’d give her time to have a snack, first.)

Also, my garden is growing by leaps and bounds and the pollen is starting to dissipate a bit, but none of these things are the reason why I know it’s summer.

I know it’s summer because the geckos anoles are back!

After a season of tracking our friend Bob hanging out on our deck, I sometimes wondered why we never saw OTHER lizards. I mean, there had to be more than one, right? And then at the end of last summer, just once or maybe twice, we saw a baby. The kids dubbed it Baby Bob. Of course.

Then summer ended and so did our lizard sightings.

But the other day, I was hanging out on the deck and got to witness a battle royale.

It started with two lizards circling each other on the railing. 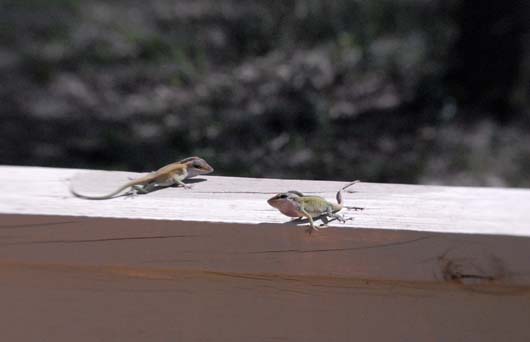 They circled each other verrrrry slooowwwwwwly for quite a while. 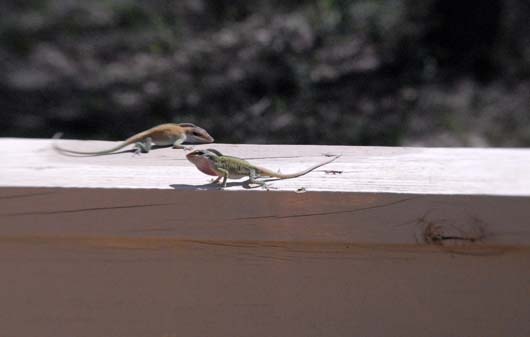 The, of course, one decided it was time to puff out his neck fan thing. Because that makes him more scary. 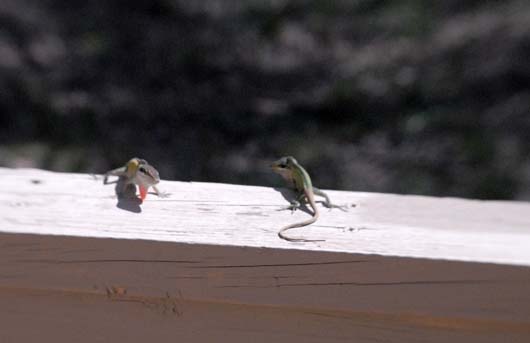 When his opponent didn’t seem sufficiently impressed, he added in a push-up. You could almost hear him thinking “And now I shall MAKE MYSELF BIG!” 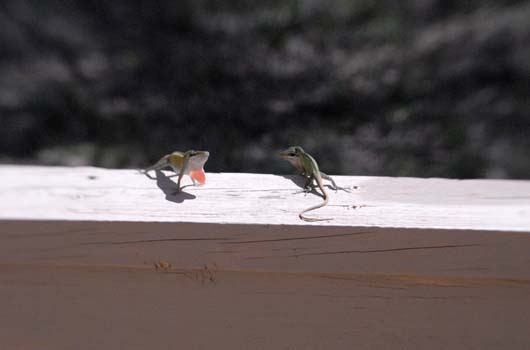 Well, that was the winning move. The other lizard scuttled down towards the ground, and first our hero chased him for a minute, and then he returned to gloat. 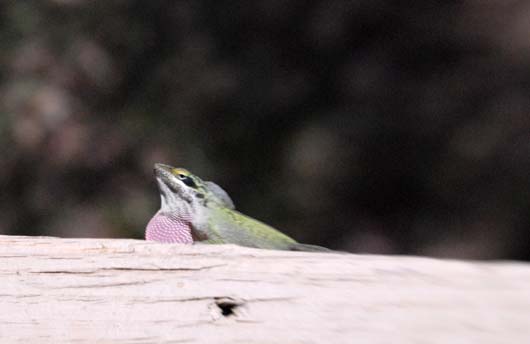 I’ve decided to call him Hercules. Hopefully he’ll be just as mighty when it comes to eating bugs on my plants.