I love how many of you remember your own Spelling Bee come-to-Jesus moment. And I even love how many of you were so concerned that I was going to use my kid to make a statement, to buck the law, man, like I regularly trot around using my offspring as body armor as necessary. Heh.

Sometimes I vent, people. Like when I’m given two days to come up with an outfit because the school said it was optional-compulsory-required-justkidding!

We found a mostly-blue skirt in the back of Chickadee’s closet (purchased when she was 7, and yes, this size 7 skirt is STILL too big around on her), and—yes, put down the phone, no need to call DFACS—I bought her a white blouse. We played by the rules. Like the good conformers that we are. Woo. I was only a TEENSY bit bitter when we arrived at the Spelling Bee and most of the kids were wearing (forbidden) jeans.

Twenty-eight kids were assembled on the stage, in various states of excitement and panic. Chickadee caught sight of us and first waved, then remembered that she was probably too cool to wave, and ducked her head for a second before checking to make sure we were still smiling and giving a thumbs up in her direction.

First there was a practice round. A few kids got words wrong, but everyone got to stay.

During the first round, about half the kids were eliminated.

During the second round, about half again.

By the end of the third round, they were down to the final two who battled it out for the title and the chance to go on to County.

She was the last speller to be eliminated before the final two.

She came out into the audience to sit with us, and she tried to put on a brave face, but she was crushed and no whispered congratulations on coming in third or having spelled a couple of really hard words would soothe her. (And, quite frankly, it didn’t help that the caller’s pronunciation of MANY of the words was… interesting. Hey, Georgia! You talk funny!)

When a minute had passed and she was clearly still not feeling better, I pulled her close and asked her if she had noticed that I was wearing my prayer box.

“Do you know what prayer I put into it this morning?” I whispered to her.

“That I would win?” she answered, glum.

“Nope.” She gave me A Look. “I prayed that you would be proud of yourself, no matter what.”

She leaned back into me and we watched in silence for a bit. Then she turned to whisper, “I really didn’t want to go to County, anyway.”

I patted her knee, and then took out my camera. 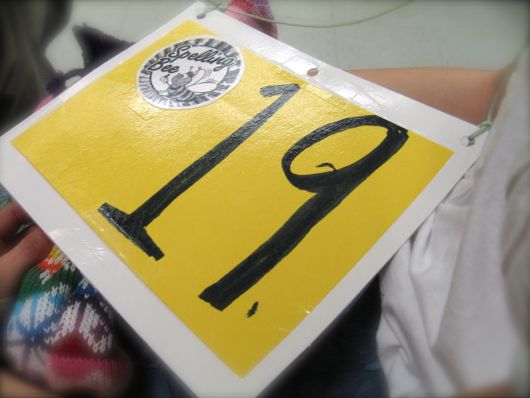