In a world which no longer makes sense, at least we always have Nerd Night. Except… we DON’T always have Nerd Night, because as our nerds get older and life intervenes, Nerd Night is often canceled or moved, and while there has MOSTLY been Nerd Night, I’ve often baked the same treats a second time and also completely forgotten to share recipes when I didn’t. It’s been on-again, off-again, and I’m disorganized. But! New year! New Nerd Nights! New recipes!! (Pay no attention to our crumbling world! Look, I have sugar and butter!)

I pretty much drowned my family and anyone else who came near in a variety of cookies for the holidays and beyond. Then I wrapped it up with a decadent birthday cake AND our favorite imitation-Cinnabon-but-from-scratch cinnamon rolls. By the time yesterday rolled around, it felt like we’d all been bathing in sugar and chocolate and cinnamon for three weeks straight. I couldn’t just give up and send carrot sticks—nerds need some quick carbs to fight the barbarians, after all—but I knew I wanted something with some fruit in it so that we could at least PRETEND it wasn’t another glob of fat and sugar. After searching around online I came across this recipe, and I knew I had a can of raspberry pie filling in the pantry that could work, plus with a few other tweaks this would feel like a break from those other treats, even though (let’s be honest) it’s still, essentially, a glob of fat and sugar. But with raspberries! And OATS, which are totally healthy! 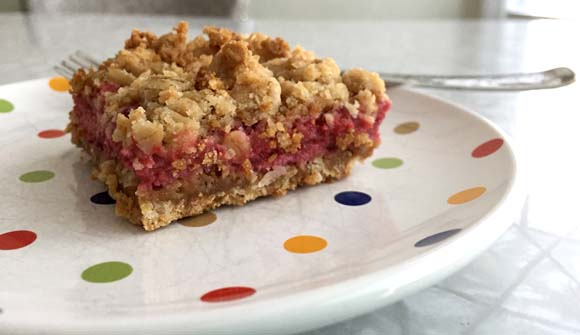 Mix the dry crust ingredients together in a bowl and then add the melted butter/coconut oil mixture. (I modified the original recipe with the addition of coconut oil because it’s both healthier and you can use less of it to achieve the same result. If you’re a butter purist, theoretically you could just use two sticks of butter. I won’t judge you.) Mix together until incorporated—it’ll be crumbly, but you shouldn’t have any loose flour. Reserve a cup and a half of crust mixture (I just scooped it back into the bowl I’d used for the butter/coconut oil) and press the rest of it evenly into your pan.

Mix the filling ingredients in another bowl (by hand is fine; this is supposedly an Amish recipe so I guess they don’t have electric mixers) and then pour over the crust. Note that this mixture will be an alarming shade of Pepto-Bismol pink and that’s fine—it will resume its more raspberry-ish color after baking. Smooth out the filling and then drop pieces of the reserved crust mixture over the top.

Bake for 30 minutes and then check to see how it’s doing—depending on your oven it may take up to 45-50 minutes to become firm in the center with golden-bown topping. Mine took about 45 minutes, and I just did 5-minute increments after the 30 minute mark because I’m paranoid and didn’t want to burn it. Let cool completely before cutting, and store in the fridge (or your garage, if it’s cold enough out). 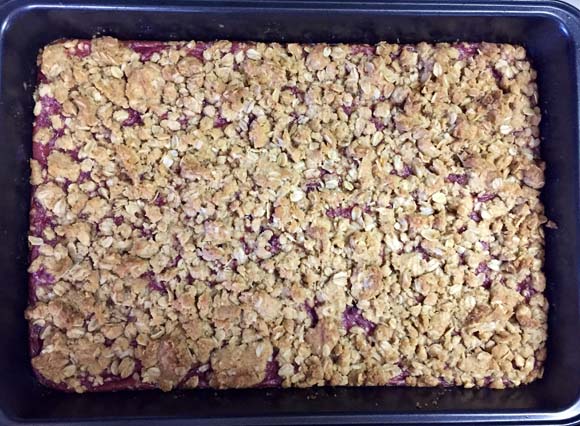 The Verdict
I felt virtuous, making these, because I added oats, cut the butter and sugar down some, and even though raspberry pie filling is probably 50% sugar, 48% food coloring, and 2% actual raspberries, it has a passing acquaintance with actual fruit and fruit is health food. (Also, did you know a can of pie filling is two cups plus just enough to eat with a spoon after you’ve removed two cups? It’s true!) Monkey said they were good and everyone liked them, and Otto had a square after Monkey returned and immediately said, “Oh, these are TERRIBLE!” (which is what he says when something is good and he doesn’t want me to feel bad about not being able to eat it). tl;dr: I would make these again.